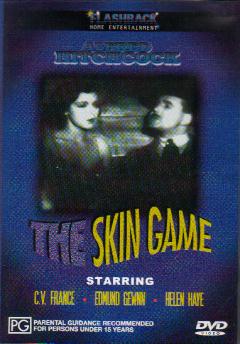 "This entry is about the film "The Skin Game". For the play of the same name see:"

"The Skin Game" is a 1931 by , based on a play by . The story revolves around two rival families, the Hillcrests and the Hornblowers, and the disastrous results of the feud between them.

Produced by (BIP), this film is considered by some critics to mark a low point in Hitchcock's career. Fact|date=August 2008

After being thought to be in the for decades, the film's rights were obtained by French media company in . A restored and remastered print of the film was released on by in 2007.

The plot tells the story of a feud between two affluent families, the long-established (upper class) Hillcrests, played by , , and , and the "nouveau riche" (formerly working class) Hornblowers, played by , , and . Two underlying themes in the story are class warfare and the urbanization of the countryside.

The Hillcrests are upset by the actions of Mr. Hornblower, whom they consider to be ostentatious and crass, in buying up land, evicting , and surrounding the area with factories. The Hillcrests make every effort they can to preserve the last large piece of open land that adjoins their beautiful rural estate.

After being tricked out of the land in an auction, the Hillcrests learn a dark secret about Mr. Hornblower's beautiful daughter-in-law Chloe (played by ). It turns out that she had previously earned a living by playing the professional "other woman" in pre-arranged divorce cases. (This implies that she may in fact have been a prostitute.)Fact|date=August 2008

When Mr. Hornblower learns of this secret, and that the Hillcrests have discovered it and are prepared to use it against his family, Mr. Hornblower agrees to sell the rural land to the Hillcrests for less than half the auction price, on the condition that the family swears to keep the information secret. However, the news starts to leak out, precipitating a crisis in the family.

Chloe Hornblower goes to the Hillcrests, begging them to help keep the secret from her husband, who is aware that something is going on. She hides behind a curtain when her husband unexpectedly storms into the Hillcrest home, demanding to know the secret.

Keeping his promise to Chloe, Mr. Hillcrest makes up a story, but the young Mr. Hornblower is not convinced, and declares that he intends to end his marriage, even though Chloe is pregnant with his child.

Upon hearing this, Chloe runs to the lily pond outside the Hillcrest home and drowns herself. When her body is discovered, the elder Hornblower concedes that Hillcrest has destroyed him and his family completely. Hillcrest attempts to apologize.

After the disappointment of this film, Hitchcock learned to take advantage of the next filmed stage play that he was ordered by his studio bosses to make. He transformed "" into a of all of his previous thrillers, without the studio bosses realizing what he had done.Fact|date=May 2008