The National Bison Range (NBR) is a National Wildlife Refuge located in western Montana established in 1908 to provide a sanctuary for the American bison. The NBR is one of the oldest National Wildlife Refuges in the United States. The size of the bison herd at the NBR is relatively small, numbering between 350 to 500 individuals. The initial herd of American bison was provided by organizations including the American Bison Society, and today the refuge serves as the central point for bison research in the United States.

The NBR consists of approximately 18,500 acres (28.91 sq mi; 74.87 km2) and is managed by the U.S. Fish and Wildlife Service. Other nearby National Wildlife Refuges are managed as parts of the National Bison Range Complex and include the Lost Trail, Ninepipe, Pablo and the Swan River National Wildlife Refuges. Also affiliated is the Northwest Montana Wetland Management District. 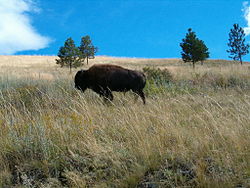 A bison roaming at the National Bison Range

Bison at the National Bison Range

Once believed to number in the tens of millions, bison once were found in all the current U.S. states except Hawaii and also throughout Canada. By 1890, bison were almost extinct, having been part of a Federal government sponsored program of eradication during the Indian Wars, thereby removing a vital food source from the Plains Indians diet, and ensuring easier relocation onto Indian reservations. The bison was also considered to be a less desirable food source over domesticated cattle because of their wild nature, and were viewed as competition for prime grazing lands that could be used by cattle. By the beginning of the 20th century, efforts were made to attempt to preserve the remaining bison and protect areas in which they could reconstitute. Today, approximately 250,000 bison can be found on federal and state lands, as well as in privately owned herds. Bison has an average of 40% less fat content per pound over beef and a higher protein content as well. Most of the private herds are used as a food source. Bison is gaining in popularity, and can often be found in grocery stores and restaurants.

The refuge provides a visitor center and two scenic roads that allow vehicular access to prime viewing areas. Elk (wapiti), mule deer, bighorn sheep and black bear also live on the refuge along with over 200 bird species. The refuge is approximately one hour north of Missoula, Montana with signs off of U.S. Highway 93 directing visitors to the entrance at Moiese, Montana, and the refuge headquarters.