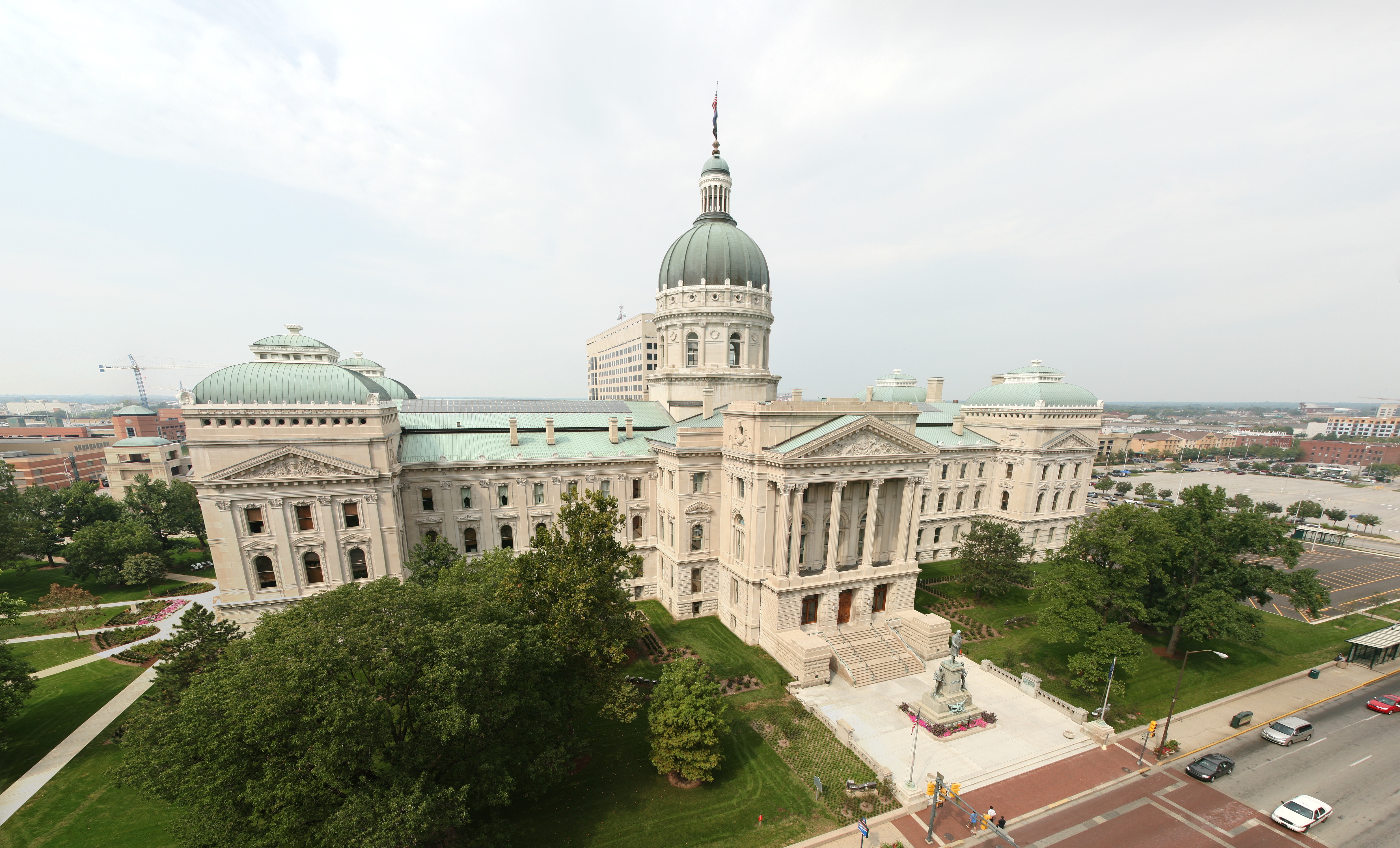 The Indiana Statehouse (or State House) is the state capitol building of the of . Housing the , the Governor of Indiana, the , and other state officials, it is located in the state capital Indianapolis at 200 West Washington Street. Built in 1888, it is the fifth building to house the state government.

The first statehouse, located in , is still standing and is maintained as a state historic site. The second building was the old Marion County courthouse which was torn down and replaced in the early twentieth century. The third building was a structure inspired by the , but was condemned in 1877 because of structural defects and razed so the current statehouse could be built on its location.

With Indiana's rapid increase in population during the middle of the nineteenth century, the state's government increased in size and caused the previous capitol building to become crowded. In 1865, a state office building had to be constructed to house some of the burgeoning government, and the Supreme Court and several bureaus were moved into the new building. The previous statehouse had also become dilapidated with age and was eventually condemned in 1877. [Gray, p. 181] Without a capitol building to house the government's offices, the administration of Governor proposed the construction of the current state capitol building. The plan was approved by the in the legislative session of 1878. Once the third state capitol building had been razed, the new building was constructed on the same site. Two million dollars () were appropriated for construction of the new building, and it was completed in 1888. Governor Williams, who was famed for his frugality, was able to complete the project for $1.8 million and returned the extra $200,000 to the general fund. [Gray, p. 184]

A team of commissioners, including former Civil War general and civil engineer , planned and oversaw the project. The structure was designed by Edwin May, an . Not wanting to repeat the mistakes made in the construction of the previous statehouse, the legislature had instructed that the new capitol be built on a solid foundation, so that it would last for many decades. Construction began in 1880 and the cornerstone was laid on September 28. Edwin May died in February of that year, and Adolph Sherrer supervised the project for the entire construction period. The interior was modeled in the style. Wherever possible, materials native to Indiana were used. Doors were made of Indiana , and was used throughout the structure. The building's cornerstone is a ten ton block of limestone quarried in . The central dome was completed in 1883. The building was also wired for , even though Indianapolis did not yet have an electrical . In 1887, the new capitol was sufficiently finished for the first to be held there. Construction ultimately took eight years, and the building was finally completed in October 1888.

A hole was bored in the cornerstone, and a time capsule was placed inside containing forty-two items. The items included annual reports from all the government agencies, a , samples of several varieties of crops grown in Indiana, several new coins, local maps and newspapers, a book on the , and pamphlets from many of the city's institutions.

The building is laid out in the shape of a cross. A large central rotunda with a glass domed ceiling connects the four wings. The structure was built four stories high. The first floor housed the executive offices of the administration. The ' offices and are on the second floor's east side. The offices are on the second floor's west side. The 's offices are on the north end of the second floor. [Statehouse Guidebook, p. 9&ndash;10] The seventy-thousand volume Supreme Court Law Library is located on third floor. The third floor also holds the House, Senate, and Supreme Court chambers, and the fourth floor is additional executive office and storage space. [Statehouse Guidebook, p. 11&ndash;12] The building was constructed for the purpose of holding the entire government of the state. For several decades all the government bureaus were housed within the building, until the government again outgrew the structure; most of the state's bureaus have gradually been moved out of the building.

In 1988, the administration of Governor proposed that the Indiana General Assembly renovate the statehouse as part of "Hoosier Celebration 88", the building's one-hundredth anniversary. The General Assembly approved, and the building underwent an extensive, multi-million dollar renovation that continued until 1995.

During the renovation process, all of the statehouse's stonework, consisting of marble, granite, and limestone columns and blocks, underwent a cleaning and polishing. All of the buildings woodwork was repaired or replaced. The glass windowing in the central dome was mostly replaced. The building's lighting was updated with new chandeliers custom made to look identical to the original ones, and most of the walls were repainted. The building was wired for a new data network to make the building ready for twenty-first-century technology.

In 1984 the statehouse was added to the , and it remains a protected building. [cite web|url=http://www.in.gov/idoa/2577.htm|title=First One Hundred Years|publisher=IN.gov|author=Indiana Historical Bureau|accessdate=2008-09-01] The statehouse is open for public tours during the week and with limited tours during weekend mornings. [cite web|url=http://www.in.gov/idoa/2512.htm|title=Statehouse Tours Office|publisher=IN.gov|accessdate=2008-08-25]

The building contained three rooms and quickly became too small for the state government, who had to build office buildings across the street for the state's administration. The lower floor of the statehouse was used by the Indiana House of Representatives. The upper floor was split into two rooms, one for the Indiana State Senate and another for the Indiana Supreme Court, with a narrow hall between them. The building was abandoned as the capitol in 1824 and was given to Harrison County to use as a courthouse. The old capitol building is still persevered and is now a state historic site [Dunn, pp. 309&ndash;310] .

When the state government relocated to Indianapolis in December 1824, the government operated out of the Marion County Courthouse. The courthouse had been constructed with state funds in 1822 after Indianapolis was chosen as the site for the new capitol. The courthouse served at the state capitol building for twelve years. At the time Indianapolis was in the wilds, nearly sixty miles (100 km) from the nearest settlement of significance making large scale construction impractical.

The move to Indianapolis was an arduous task. When the move took place it was an eleven day journey by horseback from Corydon to the new capitol. To complicate matters, no road existed and a path for the wagons had to be cut through the dense forests during the winter trip as the long caravan moved north. The caravan was necessarily large, it contained the state treasury, state library, state records, the furniture of the General Assembly, Supreme Court, and Execute Offices, along with a whole host of other implements to aid the caravan on its long journey. , the state treasurer, was authorized by the General Assembly to oversee the move. Ultimately, it took over a month to relocate the government to the capitol. The first session of the General Assembly convened there in January 1825.

In 1831, the Indiana General Assembly approved construction of a new statehouse. The building was to be funded by the sale of lots of land in Indianapolis. A commission was established and Commissioner James Blake offered $150 prize to the architect who could design the best statehouse. The firm of and created the winning design. Their plans called for a structure that was inspired by the Greek . The building looked very much like the Parthenon except for a large central dome. The firm of Town and Davis was awarded with a contract to construct the building and it was completed ahead of schedule in 1835.

The statehouse was built of blue limestone, two stories high. The governor and the supreme court occupied the lower floor, and the legislature and the occupied the upper floor, with each house in its own wing. The building saw many great events in its history, including a bier for . The building was popular after its construction but by the 1860s had fallen out style, and the building was beginning to fall into disrepair. The building's limestone foundation began to fail, and many feared a general structural collapse of the building. Then, in 1867 the ceiling in the chambers of the Indiana House of Representative collapsed. A debate was held in 1873 about how to preserve the building but no solution was found. By the time that Governor James Williams was elected into office, the building was about to be condemned. It was finally demolished in 1877.

When the third statehouse was condemned in 1876 the government abandoned the building. The General Assembly relocated to a large office building that had been built in 1865 that was already housing the Supreme Court. The Governor and the executive staff relocated to another office building. The state office building was used as the statehouse during the interim period that the new statehouse was being built. In 1887, before the new statehouse was fully completed, enough of the lower floors were finished for the government to move out of the cramped office space and begin holding sessions in the new structure. [Gray, p. 223] [cite web|url=http://www.in.gov/judiciary/supreme/history.html| title=History and Origins|author=Indiana Historical Bureau| publisher=IN.gov|accessdate=2008-06-02]