SM Mall of Asia (MOA) is a shopping mall owned and developed by SM Prime Holdings, the largest mall developer and owner in the Philippines. SM Mall of Asia is the 2nd largest mall in the Philippines after SM City North EDSA, 3rd largest shopping mall in Asia and the 4th[1] (Ref. Forbes' World's 10 Largest Shopping Malls) largest shopping mall in the world. It has a land area of 42 hectares and has a gross floor area of an approximate 390,193 m² (4.2 million square feet)[2] and 407,101 m² of total area. The mall is located in Bay City, Pasay City, Philippines near the SM Central Business Park, the Manila Bay and the southern end of EDSA (Epifanio de los Santos Avenue). The mall attracts a daily average foot traffic of about 200,000 people.

The Mall of Asia was constructed within a reclaimed area. It is built on 19.5 hectares of reclaimed land and has a gross floor area of 390,193 square meters. The mall is located at the southmost tip of Epifanio de los Santos Avenue. A roundabout was constructed in the front of the mall with a huge bronze globe similar to that of the Universal Studios Theme Parks and the Unisphere in Flushing Meadows Park in New York City. On November 18, 2009, the globe was turned into an LED Globe also known as GlobAmaze. The first and only full global video display in Asia with its high resolution and full display graphics made possible by the LED’s 26,300 pieces of point lights. This cutting edge LED technology is among other things, weather-proof, has superior brightness, and a long lifetime.[1]

The SM Mall of Asia mall grounds consists of four buildings interconnected by walkways; the Main Mall, the Entertainment Mall, and the North and South Carpark Buildings.

The Main Mall includes shopping and dining establishments and the food court. The Entertainment Mall is a two-story complex, majority of which is open-air, and facing the Manila Bay.

One of the mall's somewhat-unique features is a 20-seater tram traveling around the mall grounds to ferry shoppers around.

Concierge desks are located in the Main Mall and the Entertainment Mall.[3]

The mall includes branches of all of the standard anchor stores found in most of the SM Supermalls. The first-ever branch of Taste Asia, one of the SM Supermalls' food court brands, is located right outside the mall's supermarket, the sprawling SM Hypermarket.[4] 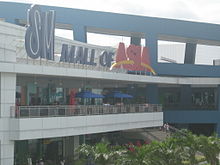 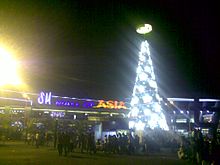 One of the mall’s main attractions is the first ever IMAX theater in the country, along with a Director's Club Theater for intimate screenings (30 La-Z-Boy seats), a Premiere Cinema, and the CenterStage Cinema which can used for live musical concerts and theatrical performances. The San Miguel-Coca-Cola IMAX Theatre is one of the world's biggest IMAX screens in 3D including 2D screenings.

In addition to the mall's special theaters, it also has six regular two-tiered movie theaters similar to the ones found in almost every SM Supermall.[5]

The mall features the Philippines's first Olympic-sized ice skating rink. At 61 by 30 meters, the rink is described as the biggest of its kind in Southeast Asia. It can accommodate both recreational and competitive figure skating, as well as ice hockey. Along with plain access and skate rentals, the rink's operators also offer training progams in both figure skating and ice hockey.[6] Several ice skating competitions have been held at the mall's ice skating rink, the most prestigious yet having been Skate Asia 2007. It was also the first time that the Philippines had hosted any international ice skating event.[7][8]

The mall also provides office space. Dell International Services, a subsidiary of Dell, Inc. once occupied a 13,470.5-square meter area at the second floor of the north parking building of the mall. At present, Teleperformance has taken over that space.

The mall is the centerpiece project of SM Prime at the SM Central Business Park, where five one-story buildings serve as the company's corporate offices (the sixth building being occupied by TeleTech Holdings, Inc. as their flagship site in the country). Construction began in mid-2002 right after the completion of a contemporary medical school, dining strip and residential complex at Macapagal Boulevard, adjacent to the SM Central Business Park.

The mall would have opened before Christmas Day of 2005 but had been delayed due to hitches in the delivery of construction materials. Frequent rains in the last quarter of 2005 also delayed the turnover of mall space to tenants. SM Prime decided to move the opening date to March 3, 2006.

On February 27, 2006, local newspaper Manila Standard Today, reported that a team of Pasay City engineers found huge cracks underneath the structure, which was causing the structure to vibrate.[10] When questioned about the inspection, the Pasay City Engineering Department denied making any statement regarding defects in the Mall of Asia. Engineer Edwin Javaluyas, Pasay City engineering officer, in his letter to SM Prime Holdings Inc., said he never stated that the city hall’s engineering department inspected the Mall of Asia on February 23, 2006.[11]

SM Prime however decided to move the opening to May 21 of that year. Jeffrey Lim, corporate information officer of SM Prime Holdings, emphasized that a rescheduling of the mall’s opening was made to give the company an opportunity to allow more tenants to open shops and denied that the change was due to structural defects.[12] Also known as "The Largest Mall in Asia" and "The 4th Largest Mall in the World" On May 20, 2006, the mall was officially inaugurated by President Gloria Macapagal-Arroyo with a special screening of Everest in the San Miguel Coca-Cola IMAX Theater. The movie was shown three days after tri-athlete Leo Oracion reached the treacherous mountain’s summit.[13] SM Bay City Arena which is under construction will be the newest addition to the attractions at the mall where large events like concerts, circus, ice shows, sports and entertainment events can be held. It is located at the side of the mall church and will compete with the 50 year-old Araneta Coliseum located at Cubao, Quezon City. SM Prime declares to replace every old SM Sign to a New One

An esplanade was constructed at the back of the mall where it served as the observation center for the First World Pyro Olympics in December 2005.

The second World Pyro Olympics were held at the SM Mall of Asia's boardwalk area in early January, 2007.[7]

The Esplanade was also the venue for Lovapalooza 2, wherein more than 5,300 couples kissed for 10 seconds on February 10, 2007, breaking Hungary's 4,445 in the Guinness World Records.

Also, an events venue named One Esplanade was constructed here. One Esplanade is usually used for product launches, parties, and other events.

There is also a strip mall owned by Mr. Henry Sy and Mr. Mariano Nocom, called the San Miguel by the Bay at the Esplanade. The strip mall has retail shops and restaurants and is an extension of the retail facilities of the SM Mall of Asia. It was opened on November 2007.

On October 13, 2007, the P313-million SM Science Discovery Center, the first of its kind in the world, was opened. SM Prime Holdings has partnered with US-based Leisure Entertainment Consultancy (LEC) for the SDC, it features a digital planetarium and a wide range of technology and science-themed exhibits.[14]

In 2009, it was renamed into Nido Fortified Science Discovery Center after being bought by Nestlé Philippines.

The groundbreaking was held on March 23, 2006. The P900 million project, was completed and inaugurated on November 5, 2007. It is set to compete with the nearby state-run Philippine International Convention Center and World Trade Center Manila.

OneE-comCenter (known as SM Corporate Center) To provide for the office and workspace requirements of prospective IT-related locator companies and for support office and backroom operations of business process outsourcing. The first building, OneE-comCenter, began March 8, 2006. The building was completed on the first week of October 2007. Its first occupant, Fitness First opened its doors on October 12, 2007. Office space will start to fill on January 2008.

The 105,857 square meter, 10 storey OneE-com Center was designed by international firm Arquitectonica and Architect Felix Lim. The building itself will have a total of 71,934 square meters available for lease. Seven floors will be allotted for office space, and the ground floor for commercial use. The average floor plate will be 9,000 square meters. There will be two and a half levels for parking with 600 slots. Tenants on the fourth floor will enjoy the convenience of parking their cars on the same floor as their offices. Offices on all floors can look out into a courtyard in the middle of the whole structure.

More than its design features, tenants of OneE-com Center will also enjoy tax incentives as it is completes its registration with the Philippine Export Zone Authority (PEZA). Its strategic location and proximity to the airport will ensure a strong market response for OneE-com Center. The building is connected by a second level pedestrian bridgeway to the mall's north parking building.[16]

Adjacent to the convention center, MetroStar Ferry Terminal, a ferry terminal has been completed to service passengers who wish to travel to peninsular Cavite City. The ferry service will cut travel time to Cavite City from 90 minutes by road to less than 30 minutes. The terminal will also serve as a passenger port for tourists who will travel to SM's tourism estate, the Hamilo Coast, in Nasugbu, Batangas.[17] On September 24, 2007, Philippine Export-Import Credit Agency (PhilEXIM) inaugurated the P135-million ferry project (between Cavite City and SM Mall of Asia). PhilEXIM President Virgilio R. Angelo stated that it guaranteed the loan of Metrostar Ferry, Inc. (Metrostar) for the government’s Manila Bay Transport Project. Angelo stated that the ferry service would also open in the Cavite City-Luneta Boardwalk-Del Pan Bridge waterway. 20,000 riders are expected to benefit (cost of P60-70, 6:30 am until 7:00 pm).[18]

San Miguel by the Bay

San Miguel by the Bay

Manila mayor Alfredo Lim ordered the demolition of structures along the shorelines of Manila Bay, Manila known as Baywalk.[19] It was one of the flagship projects of his predecessor Lito Atienza. The demolition coincides with the construction of a dining strip and open park at the back of the mall called San Miguel by the Bay. Patrons of the deserted Baywalk quickly flocked the new feature of the Mall of Asia complex, which is also along the shorelines of Manila Bay in Pasay City.

The dining strip also features a small seafood market (known as Dampa) where patrons can buy fresh seafood and request to cook them in Paluto stalls.

The second phase of the four BDO towers in Mall of Asia complex. Designed by the world-renowned firm Arquitectonica. It is expected to open in 4th quarter of 2011.