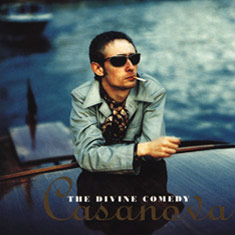 
"Casanova" is The Divine Comedy's fourth album. It was the band's commercial breakthrough. It was released on Setanta and certified gold in the UK in July 1997. This was helped by the release of The Divine Comedy's first single "Something for the Weekend" which reached number 13 on the charts. There were two other singles released from the album "Becoming More Like Alfie" and "The Frog Princess" which charted at 27 and 15 respectively. The album is also less classical sounding than "Promenade" and adopts more of a feel. An instrumental version of "Songs of Love" was used as the theme tune to .

The central theme of the album is sex. All songs on the album center around this theme except "The Dogs and the Horses". The album begins with Neil saying "Hello" and ends with him singing, "Goodbye."

The album sounds over-produced and Neil has said that he wanted it that way. It had the longest recording period of any Divine Comedy album up to that point and subsequently cost more too. Setanta was able to indulge Neil's desires because of the success of ' hit single "A Girl Like You." The album's last track, which was recorded at , features a large orchestral ensemble.

This album is the first to feature the "band" lineup with: , , , , and . was beginning to play an increasingly important role in the band. On this album Joby arranged and orchestrated "The Dogs and the Horses," and he co-arranged "Theme from Casanova" with Neil.

"The Dogs and the Horses" is very close to the musical style of Scott Walker's first four solo albums. "Through a Long and Sleepless Night," a track off "Casanova", shares the same title as a track off of Scott's first solo album.