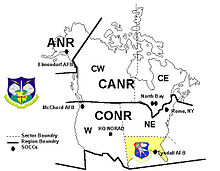 The origins of the Southeast Air Defense Sector (SEADS) begin in September 1957 with the formation of its predecessor organization, the Montgomery Air Defense Sector (MoADS) by Air Defense Command (ADC). It was established in September 1957 with a mission to train and maintain tactical flying units in state of readiness in order to defend the Southeastern United States, assuming control of former ADC Central Air Defense Force units. It's original region consisted of ADC atmospheric forces (fighter-interceptor and radar units) located east of the Mississippi River south of the 34th parallel north and east to a designated line west of the 86th meridian west, southeast to the southernmost point of Key Largo Island, Florida.

It was consolidated on 1 January 1959 with the Shreveport and Miami Air Defense Sectors, defining a region south of 34th parallel north, bordering on the east along the intersection of the parallel southeast along the Georgia/South Carolina border to the Atlantic coastline. In the west, the Sector was responsible for most of Eastern Texas south of the 34th parallel north, including the state of Louisiana, eastwards. It operated a Manual Air Direction Center (MDC) at Dobbins AFB, Georgia. The sector's mission was to train and maintain tactical flying units in state of readiness in order to defend Northeast United States while initially continuing to operate the MDC.

On 1 April 1966, MoADS was inactivated, as did the other 22 sectors in the country. Most of its assets were assumed by the 32d Air Division; the 33d Air Division assumed assets in eastern North and South Carolina. The DC-09 SAGE Direction Center was assigned to the 32d Air Division, remaining in operation until 31 December 1969. Today it is used as offices by Air University, Air Education and Training Command at Gunter AFB.

SEADS was responsible for the atmospheric defense of approximately 1,000,000 square miles (2,600,000 km2) of airspace and 3,000 miles (4,800 km) of coastline extending from Virginia to Texas. It was the busiest of the air defense sectors comprising the NORAD Continental United States North American Aerospace Defense Command Region. It operated a Sector Operations Control Center (SOCC) at Tyndall AFB, part of the Joint Surveillance System (JSS) which had replaced SAGE in 1983. This system, using the latest advances in computerized airspace control, relied on digitized radar inputs from Air Route Surveillance Radar (ARSR) sites jointly operated by the Federal Aviation Administration and the Air Force, and tethered aerostat radar balloons. More than 2,000 aircraft were detected and identified each day by SEADS technicians and operators.

Known Air National Guard units with an air defense mission under EADS were: