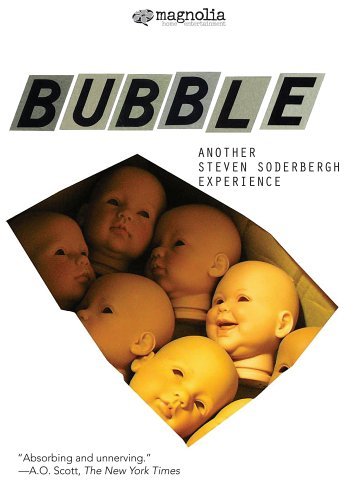 "Bubble" is a movie directed by . It was shot on and was made for a relatively small budget of $1.6 million. It also featured some unusual production aspects.

In traditional terms, the movie has no script. All lines were improvised according to an outline written by , who previously teamed with Soderbergh on "Full Frontal". "Bubble" was also shot and edited by Soderbergh under the s Peter Andrews and Mary Ann Bernard, respectively.

The film utilizes non-professional actors recruited from the / area where the film was shot. Lead Debbie Doebereiner was found working the window in a Parkersburg , for example.

It was nominated for Best Director for Steven Soderbergh at the 2007 .

"Bubble" is the first of six films Soderbergh plans to shoot and release in the same manner.

The score for the movie was composed by native .

According to an article in January 2006, the film is a thriller that revolves around the murder of a young single mother who works at the "Lee Middelton" doll factory.

The movie is about three people living along the who are just barely able to make ends meet. The first character is Martha (Debbie Doebereiner), a portly middle-aged woman getting ready for work and taking care of her elderly father. On the way to work at the doll factory she picks up her co-worker Kyle (Dustin James Ashley). He is probably Martha's only friend as she has to spend most of her time working and taking care of her father. Kyle is a tall, young man who is intensely shy and very quiet, although he does open up to Martha. In order to meet demand the doll factory hires another worker, Rose (Misty Dawn Wilkins), an attractive single mother.

Martha appears to dislike Rose from the beginning, perhaps feeling threatened by Kyle staring at Rose. We learn that Rose has a two-year old daughter and that she used to work in a . Rose further irritates Martha when she asks Martha for a ride to her second job. We learn later that Martha found Rose "pushy" from the beginning.

Rose asks Martha if she would like to make a little extra money, as Rose has a date and will need a baby-sitter. Martha accepts but frames her response as if she is doing Rose the favor. It is not until Kyle arrives to pick Rose up that Martha learns the identity of Rose's date. Martha later confesses to Rose that this surprise made her feel like an idiot.

On the date we learn that both Kyle and Rose dropped out of high school, Kyle because he has and Rose because she wanted to rebel. Later in the date, at Kyle's house, Rose sifts through his drawers and steals some cash while Kyle is grabbing a couple of beers to drink. When Kyle drops Rose off at home, he refuses to go back inside because he felt a "weird vibe" from Martha earlier.

As soon as Rose enters her house, her ex-boyfriend (who is also the father of her child) barges in and accuses her of stealing money from his house. They get in a shouting match and he eventually leaves. Martha was sitting on the couch while they argued and after he leaves she asks Rose if that was her daughter's father. Rose angrily tells her to mind her own business.

Then next morning the cops are at Rose's house and say that the neighbors found her dead with her baby crying. There is no sign of forced entry and it is apparently a murder because there are strangulation bruises on her neck. A questions Rose's ex-boyfriend and Kyle, both claiming to know nothing about the murder. During this time, Martha is pawning some of her family jewelry in order to afford some fishing equipment as a gift for Kyle. When she arrives at Kyle's house to give him the gift, she learns of Rose's murder. She is also surprised and claims to know nothing. Eventually the detective talks to her and she relates the same thing.

Kyle visits Martha in prison. As they sit with a glass wall between them, conversing on telephones, Martha pleads with Kyle to help her. She swears that she doesn't know what happened and that she did not murder Rose. Kyle appears wary of Martha and what has occurred. Later on, while in her jail cell, she sees herself in a vision standing over Rose's dead body as she mutters to herself "Oh my God".

*In the deleted scenes there is an alternate ending where Martha has a CAT scan that shows a severely in her brain. The doctor explains that it is possible that the tumor could cause blackouts and very abnormal behavior.