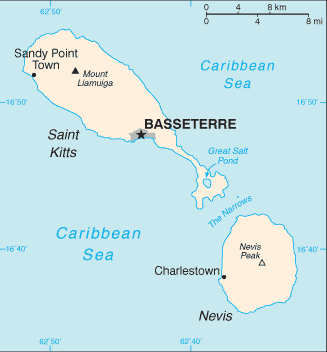 Saint Kitts (also known more formally as Saint Christopher Island ("Saint-Christophe" in French) is an in the . The west side of the island borders the Sea, and the eastern coast faces the . Together with the island of , Saint Kitts constitutes one country: the Federation of .

Saint Kitts has a population of around 35,000, the majority of whom are mainly of African descent. The primary language is English, with a literacy rate of approximately 98%. Residents call themselves Kittitians.

Saint Kitts is one of the historic centres of the Caribbean. The first successful British colony in the West Indies was founded on the island in 1624, and the island was subsequently used as a base to settle most of the neighbouring islands for Britain. It also became the site of the first successful French colony in the West Indies (with Britain and France splitting the island between them) in 1625, and was then used to settle other Caribbean territories for France.

, a is the largest fortress ever built in the Eastern Caribbean. The island is also home to the Warner Park Cricket Stadium, which was used to host matches. This made St. Kitts and Nevis the smallest nation on Earth to ever host a World Cup event.

The capital of the two-island nation, and also its largest port, is the town of on Saint Kitts. There is a modern facility for handling large s here. There is a ring road which goes around the perimeter of the island; the interior of the island is too steep for habitation.

St. Kitts is six miles (10 km) away from to the north and two miles (3 km) from to the south. St. Kitts has three distinct groups of peaks: the North West or Mount Misery Range; the Middle or Verchilds Range and the South East or Olivees Range. The highest peak is Mount Liamuiga, formerly Mount Misery, a dormant volcano some 3,792 feet (1,156 m) high.

In February of 1782, a French fleet of nearly 50 ships appeared on the horizon off St. Kitt's and Nevis. Headed by Admiral Count François de Grasse, whose flagship was the exceptionally imposing 130-gun Ville de Paris, the fleet had been dispatched to force the British from the rich sugar colonies of St. Kitts & Nevis--and that meant dislodging them from Brimstone Hill, otherwise known as The Gibraltar of the West Indies. Situated almost 800 feet above sea level, this remarkable fortress is one of the most dramatic spots in the entire Caribbean, both historically and aesthetically. It commands astounding views of the Caribbean, including Nevis, Montserrat, Saba, St. Martin and St. Barts. Brimstone Hill sprawls over 38 acres, and its massive Fort George citadel is defended by seven-foot-thick walls of black volcanic stone--then better known as brimstone. In 1782 Brimstone Hill had been under nearly continuous construction (by slave labor) for almost nine decades. The 8,000-man French siege force, supported by de Grasse's substantial fleet, calmly set to its task. After a month of almost continuous bombardment, and despite staunch resistance by Brimstone's 1,000 British troops, the French succeeded finally in punching 40-foot holes in the citadel's thick walls. Knowing their situation finally to be without hope, the British surrendered. The French siege commander, the Marquis de Bouille, paid tribute to their heroic defense by allowing the British garrison to leave Brimstone Hill as an undefeated force, in full uniform and with standards held aloft. One year later, when the Treaty of Versailles returned St. Kitts to British rule, the same honor was accorded to the French garrison.Brimstone Hill was abandoned in 1851, and the fort suffered neglect and vandalism for the next century. In 1965, when the site became a national park, intensive restoration returned the imposing fortress perched atop the hill to its original grandeur. Tours of Brimstone Hill are conducted daily, and highlights include the hospital, ammunition stores, artillery officer's quarters, the Prince of Wales Bastion, and the Citadel of Fort George.

Kittitians use the which maintains a fixed exchange rate of 2.67-to-one with the . The US dollar is just as widely accepted as the Eastern Caribbean dollar.

For hundreds of years, St. Kitts operated as a . But due to decreasing profitability, the government closed the industry in 2005. is a major and growing source of income to the island, although the number and density of resorts is less than on other Caribbean islands. , non-sugar agriculture, manufacturing and construction are the other growing sectors of the economy [http://www.gov.kn/pdf/200512_13%20Budget%20Address%20FY%202006.pdf] .

In addition to this, in hopes of expanding tourism, the country hosts its annual .

During the last , the sea level was 200 feet (60 m) lower and St. Kitts and Nevis were one island with (also known as Statia) and .

St. Kitts was originally settled by pre-agricultural, pre-ceramic "Archaic people", who migrated down the archipelago from Florida. In a few hundred years they disappeared, to be replaced by the -using and people around 100 BC, which migrated to St. Kitts up the archipelago from the banks of the in . Around 800 AD, they were replaced by the people, members of the tribe.

Around 1300, the , or Carib people arrived on the islands. These war-like people quickly dispersed the Igneri, and forced them northwards to the . They named Saint Kitts "Liamuiga" meaning "fertile island", and would likely have expanded further north if not for the arrival of Europeans.

Early European contact with St. Kitts included the Spanish under , and a French Huguenot settlement at Dieppe in 1538. The first permanent settlement was an English colony in 1623, followed by a French colony in 1625. The British and French briefly united to massacre the local Kalinago (preempting a Kalinago plan to massacre the Europeans), and then partitioned the island, with the English in the middle and the French on either end.

The island alternated repeatedly between English and French control over the century, as one power took the whole island, only to have it switch hands due to treaties or further military action. Parts of the island were heavily fortified, as exemplified by UNESCO World Heritage Site at and the now-crumbling Fort Charles. The island became British for the final time in 1783.

The island originally produced , but changed to in 1640 due to stiff competition from the colony of . The labour-intensive farming of sugar cane was the reason for the large-scale importation of s. The importation began almost immediately upon the arrival of Europeans to the region.

The purchasing of enslaved Africans was outlawed in the by an Act of Parliament in 1807. Slavery was abolished by an Act of Parliament that became law on 1 August 1834. This emancipation was followed by four years of apprenticeship, put in place to protect the plantation owners from losing their labour force. The 1st August is now celebrated as a public holiday and is called . In 1883 St. Kitts, and were all linked under one presidency, located on St. Kitts, to the dismay of the Nevisians and Anguillans. Anguilla eventually separated out of this arrangement in 1971, after an armed raid on St. Kitts.

Sugar production continued to dominate the local economy until 2005, when, after 365 years as a monoculture, the government closed the sugar industry. This was due to the industry's huge losses and plans to cut sugar prices by large amounts in the near future.

* Lord was governor of Saint Christopher from 1855 to 1859.
* Robert Bradshaw was a major political figure in St. Kitts from 1932 to his death in 1978.
* [http://website.lineone.net/~stkittsnevis/official_name.htm Official Name: The Federation of St. Christopher and Nevis]
* [http://www.swagga.com/story2.htm The History of St. Kitts Nevis: a Black Perspective]