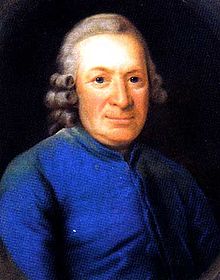 Daniel Itzig (also known as Daniel Yoffe 18 March 1723 – 17 May 1799) was a Court Jew of Kings Frederick II the Great and Frederick William II of Prussia.

Itzig was born in Berlin. His family was mercantile; His wife Miriam's ancestors were the famous Rabbi Moses Isserles of Cracow and Joseph ben Mordechai Gershon[1]. Itzig was a banker in partnership with Feitel (Efraim) Heine. Together they owned factories for oil and lead. During the Seven Years War he assisted Frederick the Great. Following the war he was appointed Master of the Mint, and the Prussian court banker by Frederik's successor, Frederick William II in 1797. Itzig was one of the very few Jews in Prussia to receive full citizenship privileges, as a "Useful Jew"[2]. He became extraordinarily wealthy as a consequence. 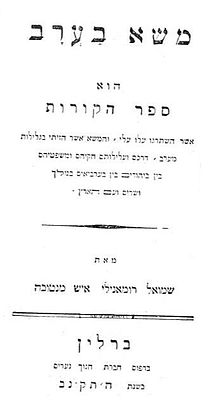 Together with his son in law David Friedlander, Itzig was appointed to lead a committee which was to discuss ways to improve the Jewish civil and social standing in Prussia. He funded early members of the Haskalah secular movement, including Rabbi Israel of Zamosch (Moses Mendelsohn's teacher), Samuel Rominow (a colorful Italian Jewish artist) and Isaac Satanow[3].

In 1761 he began planning a school for poor Jewish boys in Berlin, and in 1778 his son together with Daniel Friedlander opened the first "free school" (Freischule) called "Hinuch Neorim", Hebrew for 'Teaching the Young Ones'. The school and adjacent printing house later became one of the main institutions of the Haskalah movement. At the same time he founded and funded a Yeshiva and brought Rabbi Zvi Hirsch Levine and Rabbi Yozef Teomim to Berlin to teach there.

In 1782 during the Words of Peace and Truth controversy, he sided with Hirz Wiesel, but at the same time convinced Rabbi Levine to stay.

Itzig was official head of the Jewish community in Berlin, all of Prussia from 1764 till his death in 1799.

Nearly all of the thirteen of his children who lived to adulthood became influential in German Jewish history. Two of his granddaughters married two of Moses Mendelshohn's sons. One of them was Lea (née Solomon) mother of Felix Mendelssohn the composer and Fanny Hansel pianist and grandmother of mathematician Kurt Hensel.