New York State Route 403 (NY 403) is a short state highway located entirely within Putnam County. It connects NY 9D in Philipstown at its northern/western end to US 9 in Graymoor, where the Appalachian Trail crosses both highways. At that intersection, NY 403 is signed as a route to the Bear Mountain Bridge, although it is a rather circuitous route there.

Half of its length is uphill going south. It is also known as Cat Rock Road. 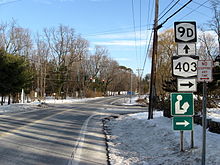 Route 403 begins at an oblique intersection with US 9 in Graymoor, where the Appalachian Trail crosses both highways. At first it travels to the north, passing an old country estate.

It then turns west to the pass between Fort Hill and Castle Rock. As it descends again it passes the Walker House, a large Queen Anne given by railroad magnate Samuel Sloan to one of his daughters. At its northern terminus, the intersection with NY 9D known as Garrison Four Corners, marked by another historic house, Ralph Adams Cram's The Birches.[4]

The entire route is in Philipstown, Putnam County.