The Cold Regions Research and Engineering Laboratory (CRREL) is a United States Army Corps of Engineers, Engineer Research and Development Center research facility headquartered in Hanover, New Hampshire that provides scientific and engineering support to the U.S. government and its military with a core emphasis on cold environments. CRREL also provides technical support to non-government customers.

CRREL arose from a consolidation of three antecedent organizations whose purpose was to understand frozen ground, permafrost, snow and ice as factors which were important in strategic northern areas during the Cold War. In its first 25 years CRREL researchers contributed to the understanding of polar ice caps, permafrost, and the engineering technology for developing natural resources in cold climates, such as Alaska. More recently, CRREL researchers have made contributions to science in climate change, the understanding of wave propagation for sensor systems, the control of snow on structures and ice in navigable waterways, and the environmental remediation of military installations.

The stated mission of CRREL is to "solve interdisciplinary, strategically important problems of the US Army Corps of Engineers, Army, DOD, and the Nation by advancing and applying science and engineering to complex environments, materials, and processes in all seasons and climates, with unique core competencies related to the Earth's cold regions."[1] 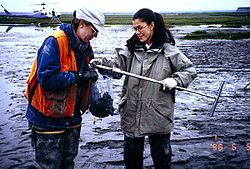 The technical areas that CRREL staff reportedly engage in are:[2] 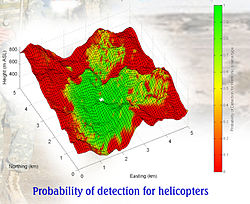 Simulation of terrain, depicting the probability of detecting helicopters from the center of the grid.

Evaluation of surfactants to control oil on ice-infested water within the refrigerated test basin of the Ice Engineering Facility.

The main facility is located in Hanover, New Hampshire north of Dartmouth College. The facilities include:

CRREL maintains an office at Fort Wainwright, near Fairbanks, Alaska, and an office at the Army Corps of Engineers Alaska District in Anchorage, Alaska.[12]

CRREL was formed on 1 February 1961 from a merger of the earlier Snow, Ice and Permafrost Research Establishment (SIPRE)[14] with the Arctic Construction and Frost Effects Laboratory (AFCEL). 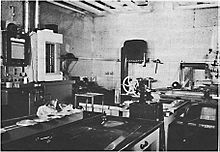 Cold room for studying snow and ice at SIPRE

CRREL's antecedents and establishment were chronicled in an official history.[15] In 1944-53 the U.S. Army Corps of Engineers established three independent organizations that were the antecedents to CRREL. Within its New England Division, the Corps of Engineers founded the Frost Effects Laboratory to "coordinate research on the effects of frost on the design and construction of roads, airfields and structures in frost-affected areas," based in Boston, Massachusetts in 1944. The Corps of Engineers' St. Paul (Minnesota) District established its Permafrost Division in 1944 to determine design methods and construction procedures for the construction of airfields on permafrost.

The Corps established SIPRE (the Snow, Ice and Permafrost Research Establishment) in 1949, which moved to Wilmette, Illinois in 1951. Its purpose was to "conduct basic and applied research in snow, ice and frozen ground." In 1953, the Corps merged the Frost Effects Laboratory and Permafrost Division of the St. Paul District to establish ACFEL (the Arctic Construction and Frost Effects Laboratory) in Boston. In 1959, SIPRE researchers participated in the establishment of Camp Century in Greenland to study technical and scientific issues with a facility, based on the Greenland Ice Cap. Having built a new facility for the combined SIPRE and AFCEL organizations, the Corps established CRREL on 1 February 1961 in Hanover, New Hampshire, 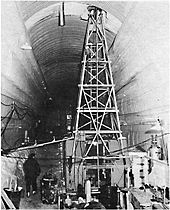 Thermal drill used to bore into the Greenland ice sheet at Camp Century.

In 1966, CRREL researchers successfully drilled through the Greenland ice cap to a depth of 4,550 feet (1,390 m). The effort took three years, but provided a continuous ice core that represented more than 120,000 years. This extended the ability of scientists to interpret climatic history and became an early source of information about global climate change. In 1968, the same CRREL team was the first to penetrate the Antarctic ice cap, after drilling through over 7,100 feet (2,200 m) of ice, providing a climatic record at a second location on the globe.[15][16]

The 1967 discovery of oil north of Alaska’s Brooks Range raised two basic questions that CRREL was positioned to answer as a consultant to participating oil companies: how to extract oil from frozen terrain, permafrost, or from under the perennially frozen Beaufort Sea, and how best to transport the crude oil to the continental U.S. for refining and consumption.

CRREL staff members participated in the exploration of two transportation options, the use of an ice-breaking oil tanker, and the use of an over-land pipeline that would cross much of Alaska over regions of permafrost. As for the Beaufort Sea, CRREL researchers conducted studies of the properties and behavior of arctic sea ice, which would present a problem for off-shore drilling operations.[17] CRREL researchers were active participants in both voyages of the icebreaking oil tanker SS Manhattan to assess the feasibility of the sea transport option. At the same time, CRREL engineers reviewed and advised the federal inspector of the Trans-Alaska Pipeline. During the construction of the pipeline, CRREL researchers studied the engineering implications of foundations and roadways over permafrost and ice.[15][18]

In the 1970s CRREL supported a Corps of Engineers initiative to extend navigation through the Great Lakes and St. Lawrence Seaway throughout the winter. They developed methods to address icing of locks and the clogging of waterways with floating ice that included booms, bubblers, and coatings of locks.[15][19]

Move of DYE 2 radar facility to new foundations on the Greenland ice cap.

CRREL played a role in assisting the U.S. Air Force to establish[20] and maintain a system of Distant Early Warning (DEW) Line facilities during the Cold War era. In 1976, a CRREL researcher was instrumental in the moving of a 10-story-high, 3,300-ton DEW Line facility on the Greenland Ice Cap from a foundation that had been compromised by the movement of the ice on which it was built to a new foundation.[21] In 1984, CRREL personnel completed their survey reports for 31 sites of the new North Warning System that replaced the DEW line.[15][22]

CRREL's second 25 years saw the dissolution of the Soviet Union, the end of the Cold War and a shift in funding that reduced the emphasis of direct appropriations from Congress to a greater reliance on reimbursement for research from CRREL's customers, as evidenced by the sponsorship of its technical reports.[23] Customers funding CRREL research included various components of the U.S. Army, Air Force and Navy. In addition, civilian agencies turned to CRREL for research answers, including the National Science Foundation, the Environmental Protection Agency, and NASA. In addition, a variety of private organizations funded CRREL research to solve problems that they faced. CRREL's list of technical reports lists 27 topical categories, covering science and engineering.[24]

CRREL continued to grow its capability to serve the U.S. military with programs in signal propagation that would facilitate the detection of enemy movements via infrared imaging, radar,[25] acoustics[26] or seismic[27] sensors in any meteorological conditions. It served the environmental needs of the U.S. Army by facilitating the identification and clean-up of contaminants on training lands, due primarily to partially detonated explosives[28] or unexploded ordinance (UXO).[29] Other researchers addressed mobility issues with vehicles over snow and muddy terrain. CRREL researchers participated in defining tactical runway requirements for the C-17 military transport aircraft.[30]

CRREL staff continued to make a mark in polar research, both in the Arctic and Antarctic. In the Arctic, CRREL researchers were active in the Surface Heat Budget of the Arctic Ocean (SHEBA) experiment conducted in the Arctic Ocean from October 1997 to October 1998 to provide polar input to global climate models.[31][32] Other researchers performed traverses of Antarctica and Greenland to collect data, pertinent to global climate change.[33] In 2010, a CRREL researcher was co-chief scientist on another icebreaker-based scientific mission, called "Impacts of Climate Change on Ecosystems and Chemistry of the Arctic Pacific Environment" or ICESCAPE, to determine "the impact of climate change on the biogeochemistry and ecology of the Chukchi and Beaufort Seas."[34]

Other CRREL researchers developed ways to upgrade and maintain the research facilities of the U.S. National Science Foundation in Antarctica, including the design and construction of a new South Pole Station and developing criteria to allow modern aircraft to land on snow runways.[35] CRREL staff explored and helped develop a new overland supply route across the Ross Ice Shelf over the Antarctic Range and the Antarctic ice cap to lower the cost of supplying the South Pole Station.[36][37]

In its Corps of Engineers Civil Works mission, CRREL researchers developed innovative ways to avoid ice jams and databases to address the widespread occurrence of such problems.[38] A substantial Ice Engineering Facility was built to support modeling of these problems. A Remote-Sensing and GIS (Geographical Information System) facility and organization were established to better employ the resources of satellite imagery and mapping of information to address problems world-wide.[39]. Another major facility, the Frost Effects Research Facility, was built to study problems associated with airfields and roadways, subject to freeze-thaw. An automated loading machine was acquired to simulate the passage of vehicle and aircraft tires on pavements.[40] In building technology, researchers helped develop statistical means to identify snow loads throughout the United States[41] and standards for measuring heat loss,[42][43] roof moisture detection,[44] and frost-protected shallow foundations.[45]

In October 1999, CRREL became a member of an umbrella organization of Corps of Engineers laboratories, called the Engineer Research and Development Center (ERDC). The consolidation of seven laboratories, the Coastal and Hydraulics, Environmental, Geotechnical and Structures, and Information Technology Laboratories in Vicksburg, Mississippi; the Construction Engineering Research Laboratory in Champaign, Illinois; CRREL in New Hampshire.; and the Topographic Engineering Center in Alexandria, Virginia established the ERDC in four geographic sites around the country.[46]

Originally, CRREL cold-room facilities used trichloroethylene (TCE) as a refrigerant. At the time there were few known environmental hazards attributed to TCE. Subsequently, TCE has been identified as a carcinogen. In 1970, an industrial accident resulted in a spill of approximately 3,000 gallons of TCE. In 1978, TCE was introduced into the ground via an experimental well. After the 1990 discovery of TCE in groundwater, CRREL embarked on a remediation plan, approved by the New Hampshire Department of Environmental Services (NHDES), with assistance from the U.S Army Toxic and Hazardous Materials Agency and the Corps of Engineers New England Division. NHDES reports that CRREL no longer stores TCE on site and the remediation of TCE in the groundwater is subject to monitoring in test wells.[47]

The Army Research and Development Achievement Award is provided to distinguished researchers working within the Army laboratory system. Some notable CRREL recipients were:[15]