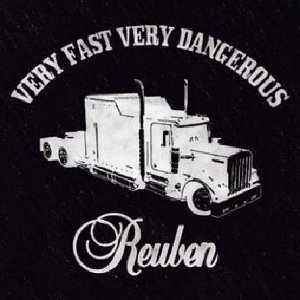 "Very Fast Very Dangerous" is the second album by British rock band Reuben, released little over a year after their debut. Song writing for this album begun as soon as the recording for its predecessor, Racecar Is Racecar Backwards had finished in . The name originates from a line in "". The album was produced by Chris Sheldon (who has previously worked for and ) at Raezor Studios.

Many fans noted "Very Fast" as a "stronger and more complete album" than their debut, and critics largely praised the album, calling it "fantastic" and "essential". However, smaller independent fanzineswhich, who had notably praised Reuben in their early days, criticised the album as narrowing of musical scope given its more straight-forward rock approach, and even accused it of being an attempt by the band at .

In a surprising feat for an underground rock band, the album entered #4 in the in its first week, beaten only by high-risers , and . It made #87 in the mainstream chart, and one place higher than "Racecar Is Racecar Backwards".

"Every Time A Teenager Listens To Drum & Bass A Rockstar Dies"

*This was the first Reuben track to feature a pre-song computer "beats" section
*The first time the lyric 'you're so pretty and I'm so stupid' is heard on this track, it was sung through a microphone stripped from a WWII tank that producer Chris Sheldon had bought.
*In the gap between the intro of this song and the start of the big riff, Jamie can be heard shouting 'place your bets now', a catchphrase from gambling show "Banzai". Jamie is referring to the odds on whether or not the band will get through that particular take from start to finish without messing up.
*The song was originally called "Hulk Smash".

*The talking on the front of this song is Chris Sheldon, talking about his performance of a few 'Come on's' at the start of the song, which Jamie had heard him doing in the control room and insisted he re-create. The squeals of 'argh' are genuine yelps of pain he emitted when Ryan had his headphone mix too loud.
*The band claim this song has "the worst lyrics for any chorus ever".

"A Kick In The Mouth"

*The tinkling sounds on the second verse are a selection of mugs and glasses from Raezor's cupboards, filled with varying amounts of water and hit with drumsticks by Jamie after Jon suggested it would be funny if they had them glasses with water in them on the song. They are actually in tune.

"Return of The Jedi"

*At 7.22, this is Reuben's longest song to date.
*This song was originally called "Recouping is SO 1987...", and kept this name until after the sessions. The section at the end of the song where the strings comes in is known as 'The sea battle'. The new title is taken from the .

*The band demoed 18 tracks for inclusion on the album in one day at Jacob's studios in . These included two tracks which had been demoed for the first album and not made the cut: "Stupid" and "Approaching by Stealth", the latter of which was later re-recorded by Sam Bell, who'd also engineered the demos, for inclusion on the vinyl release of the "" single.
*The band and the production team (Chris Sheldon, engineer Ryan and studio owner Ian), as well as a few guests managed to drink 750 cups of tea during the five week recording. When it was revealed that the band were only thirty or so cups away from drinking the whole of the third box of 250 teabags, a mammoth tea-drinking mission was undertaken.
*Martin, who played cello on the album, also played guitar in .
*The band's record company asked them if they would record the song "Blitzkrieg" during the album sessions if they had enough time, even though it had not made the final selection of 13 tracks that the band had agreed on. The band agreed, but ran out of time when a whole week was lost, spent re-recording guitar parts that were found to be out of tune. Up until that time, the recording had been running ahead of schedule.
*A blamethrower is a special kind of non-lethal weapon invented by in the film "".
*A VFVD T-shirt can be seen in the video for "Liquid Lives".