An animation depicting the orbits of GPS satellites in medium Earth orbit. 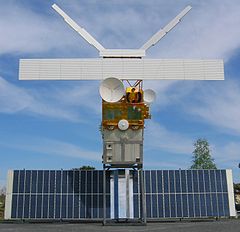 A full-size model of the Earth observation satellite ERS 2

In the context of spaceflight, a satellite is an object which has been placed into orbit by human endeavour. Such objects are sometimes called artificial satellites to distinguish them from natural satellites such as the Moon.

Satellites are used for a large number of purposes. Common types include military and civilian Earth observation satellites, communications satellites, navigation satellites, weather satellites, and research satellites. Space stations and human spacecraft in orbit are also satellites. Satellite orbits vary greatly, depending on the purpose of the satellite, and are classified in a number of ways. Well-known (overlapping) classes include low Earth orbit, polar orbit, and geostationary orbit.

The first fictional depiction of a satellite being launched into orbit is a short story by Edward Everett Hale, The Brick Moon. The story is serialized in The Atlantic Monthly, starting in 1869.[1][2] The idea surfaces again in Jules Verne's The Begum's Fortune (1879).

In 1903, Konstantin Tsiolkovsky (1857–1935) published Means of Reaction Devices (in Russian: Исследование мировых пространств реактивными приборами), which is the first academic treatise on the use of rocketry to launch spacecraft. He calculated the orbital speed required for a minimal orbit around the Earth at 8 km/s, and that a multi-stage rocket fueled by liquid propellants could be used to achieve this. He proposed the use of liquid hydrogen and liquid oxygen, though other combinations can be used.

In 1928 Slovenian Herman Potočnik (1892–1929) published his sole book, The Problem of Space Travel — The Rocket Motor (German: Das Problem der Befahrung des Weltraums — der Raketen-Motor), a plan for a breakthrough into space and a permanent human presence there. He conceived of a space station in detail and calculated its geostationary orbit. He described the use of orbiting spacecraft for detailed peaceful and military observation of the ground and described how the special conditions of space could be useful for scientific experiments. The book described geostationary satellites (first put forward by Tsiolkovsky) and discussed communication between them and the ground using radio, but fell short of the idea of using satellites for mass broadcasting and as telecommunications relays.

In a 1945 Wireless World article the English science fiction writer Arthur C. Clarke (1917–2008) described in detail the possible use of communications satellites for mass communications.[3] Clarke examined the logistics of satellite launch, possible orbits and other aspects of the creation of a network of world-circling satellites, pointing to the benefits of high-speed global communications. He also suggested that three geostationary satellites would provide coverage over the entire planet.

The US military studied the idea of what was referred to as the earth satellite vehicle when Secretary of Defense, James Forrestal, made a public announcement on December 29, 1948 that his office was coordinating that project between the various services.[4] 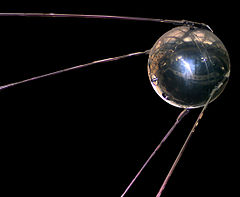 The first artificial satellite was Sputnik 1, launched by the Soviet Union on October 4, 1957, and initiating the Soviet Sputnik program, with Sergei Korolev as chief designer (there is a crater on the lunar far side which bears his name). This in turn triggered the Space Race between the Soviet Union and the United States.

Sputnik 1 helped to identify the density of high atmospheric layers through measurement of its orbital change and provided data on radio-signal distribution in the ionosphere. The unanticipated announcement of Sputnik 1's success precipitated the Sputnik crisis in the United States and ignited the so-called Space Race within the Cold War.

Sputnik 2 was launched on November 3, 1957 and carried the first living passenger into orbit, a dog named Laika.[5]

In May, 1946, Project RAND had released the Preliminary Design of an Experimental World-Circling Spaceship, which stated, "A satellite vehicle with appropriate instrumentation can be expected to be one of the most potent scientific tools of the Twentieth Century.[6] The United States had been considering launching orbital satellites since 1945 under the Bureau of Aeronautics of the United States Navy. The United States Air Force's Project RAND eventually released the above report, but did not believe that the satellite was a potential military weapon; rather, they considered it to be a tool for science, politics, and propaganda. In 1954, the Secretary of Defense stated, "I know of no American satellite program."[7]

Following pressure by the American Rocket Society, the National Science Foundation, and the International Geophysical Year, military interest picked up and in early 1955 the Army and Navy were working on Project Orbiter, two competing programs, the army's which involved using a Jupiter C rocket, and the civilian/Navy Vanguard Rocket, to launch a satellite. At first, they failed: initial preference was given to the Vanguard program whose launch vehicle had a strange and uncanny way of exploding on national television. But finally, three months after Sputnik 1, the project succeeded; Explorer 1 thus became the United States' first artificial satellite on January 31, 1958.[8]

In June 1961, three-and-a-half years after the launch of Sputnik 1, the Air Force used resources of the United States Space Surveillance Network to catalog 115 Earth-orbiting satellites.[9]

The largest artificial satellite currently orbiting the Earth is the International Space Station.

The United States Space Surveillance Network (SSN), a division of The United States Strategic Command, has been tracking objects in Earth's orbit since 1957 when the Soviets opened the space age with the launch of Sputnik I. Since then, the SSN has tracked more than 26,000 objects. The SSN currently tracks more than 8,000 man-made orbiting objects. The rest have re-entered Earth's atmosphere and disintegrated, or survived re-entry and impacted the Earth. The SSN tracks objects that are 10 centimeters in diameter or larger; those now orbiting Earth range from satellites weighing several tons to pieces of spent rocket bodies weighing only 10 pounds. About seven percent are operational satellites (i.e. ~560 satellites), the rest are space debris.[10] The United States Strategic Command is primarily interested in the active satellites, but also tracks space debris which upon reentry might otherwise be mistaken for incoming missiles.

There are three basic categories of non-military satellite services:[12]

Fixed satellite services handle hundreds of billions of voice, data, and video transmission tasks across all countries and continents between certain points on the Earth's surface.

Mobile satellite systems help connect remote regions, vehicles, ships, people and aircraft to other parts of the world and/or other mobile or stationary communications units, in addition to serving as navigation systems. 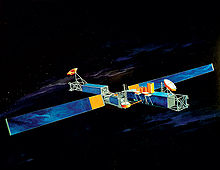 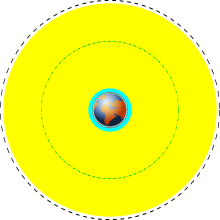 The first satellite, Sputnik 1, was put into orbit around Earth and was therefore in geocentric orbit. By far this is the most common type of orbit with approximately 2456 artificial satellites orbiting the Earth. Geocentric orbits may be further classified by their altitude, inclination and eccentricity.

The general structure of a satellite is that it is connected to the earth stations that are present on the ground and connected through terrestrial links.

The satellite's functional versatility is imbedded within its technical components and its operations characteristics. Looking at the "anatomy" of a typical satellite, one discovers two modules.[12] Note that some novel architectural concepts such as Fractionated Spacecraft somewhat upset this taxonomy.

This bus module consist of the following subsystems:

The structural subsystem provides the mechanical base structure, shields the satellite from extreme temperature changes and micro-meteorite damage, and controls the satellite's spin functions.

The power subsystem consists of solar panels and backup batteries that generate power when the satellite passes into the Earth's shadow. Nuclear power sources (Radioisotope thermoelectric generators) have been used in several successful satellite programs including the Nimbus program (1964–1978).[16]

The thermal control subsystem helps protect electronic equipment from extreme temperatures due to intense sunlight or the lack of sun exposure on different sides of the satellite's body (e.g. Optical Solar Reflector)

The attitude and orbit control subsystem consists of small rocket thrusters that keep the satellite in the correct orbital position and keep antennas positioning in the right directions.

The second major module is the communication payload, which is made up of transponders. A transponder is capable of : 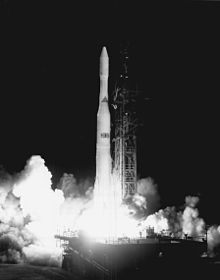 This list includes countries with an independent capability to place satellites in orbit, including production of the necessary launch vehicle. Note: many more countries have the capability to design and build satellites but are unable to launch them, instead relying on foreign launch services. This list does not consider those numerous countries, but only lists those capable of launching satellites indigenously, and the date this capability was first demonstrated. Does not include consortium satellites or multi-national satellites.

A few other private companies are capable of sub-orbital launches.

While Canada was the third country to build a satellite which was launched into space,[24] it was launched aboard a U.S. rocket from a U.S. spaceport. The same goes for Australia, who launched on-board a donated Redstone rocket. The first Italian-launched was San Marco 1, launched on 15 December 1964 on a U.S. Scout rocket from Wallops Island (VA,USA) with an Italian Launch Team trained by NASA.[25] Australia's launch project (WRESAT) involved a donated U.S. missile and U. S. support staff as well as a joint launch facility with the United Kingdom.[26] The first satellite built by Singapore, X-SAT, was launched aboard a PSLV rocket on April 20, 2011.[27]

For more details on this topic, see Anti-satellite weapon.

In recent times satellites have been hacked by militant organizations to broadcast propaganda and to pilfer classified information from military communication networks.[45][46]

For testing purposes, satellites in low earth orbit have been destroyed by ballistic missiles launched from earth. Russia, the United States and China have demonstrated the ability to eliminate satellites.[47] In 2007 the Chinese military shot down an aging weather satellite,[47] followed by the US Navy shooting down a defunct spy satellite in February 2008.[48]

Due to the low received signal strength of satellite transmissions, they are prone to jamming by land-based transmitters. Such jamming is limited to the geographical area within the transmitter's range. GPS satellites are potential targets for jamming,[49][50] but satellite phone and television signals have also been subjected to jamming.[51][52]

Also, it is trivial to transmit a carrier radio signal to a geostationary satellite and thus interfere with the legitimate uses of the satellite's transponder. It is common for Earth stations to transmit at the wrong time or on the wrong frequency in commercial satellite space, and dual-illuminate the transponder, rendering the frequency unusable. Satellite operators now have sophisticated monitoring that enables them to pinpoint the source of any carrier and manage the transponder space effectively.[citation needed]