Trpimir I (Latin: Trepimero) was a duke (knez) of Croatia in 845–864, and the founder of the Croatian House of Trpimirović. Although he was formally vassal of the Frankish Emperor Lothair I, Trpimir used Frankish-Byzantine conflicts to rule on his own. 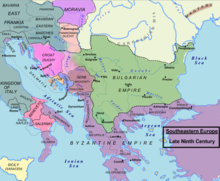 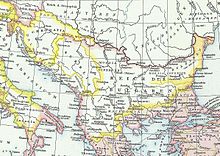 Littoral Croatia at the end of Trpimir's reign.

Trpimir succeeded Croatia's Duke Mislav in 845 and ascended the throne in Klis, and expanded the early Roman stronghold into Klis Fortress, the capital of his domain. Trpimir battled successfully against his neighbours, the Byzantine coastal cities under the strategos of Zadar in 846–848. In 853 he repulsed an attack by an army of the Bulgarian Khan Boris I and concluded a peace treaty with him, exchanging gifts.

On 4 March 852 Trpimir issued a charter in Biaći (in loco Byaci dicitur) in the Latin language, confirming Mislav's donations to the Archbishopric in Split. In this document, Trpimir named himself "by the mercy of God, Duke of Croats" (Latin: Dux Chroatorum iuvatus munere divino) and his realm as the "Realm of the Croats" (Regnum Chroatorum).[1] Also, with his son Petar, he often undertook pilgrimages to Cividale, which was recorded in the Evangelistary of Cividale.

As a fervent Christian, Trpimir brought the Benedictins into Croatia, built a church and the first Benedictine monastery in Rižinice,[1] between the towns of Klis and Solin, in 852. In the insignia on the monastery, carved in stone, stands a text with the duke's name and title:

The Saxon theologian Gottschalk of Orbais was at Trpimir's court between 846 and 848, and his work De Trina deitate is an important source for Trpimir's reign. Trpimir was a proclaimed "rex Sclavorum" as a token of admiration from Gottschalk, which is also a sign of his independent rule.

The end of Trpimir's reign remains vaguely distinctive, just like the sequence of his successors. Allegedly, he had three sons; Peter, Zdeslav and Muncimir. According to a theory, he was successed by latter Zdeslav, who was later deposed by Domagoj.