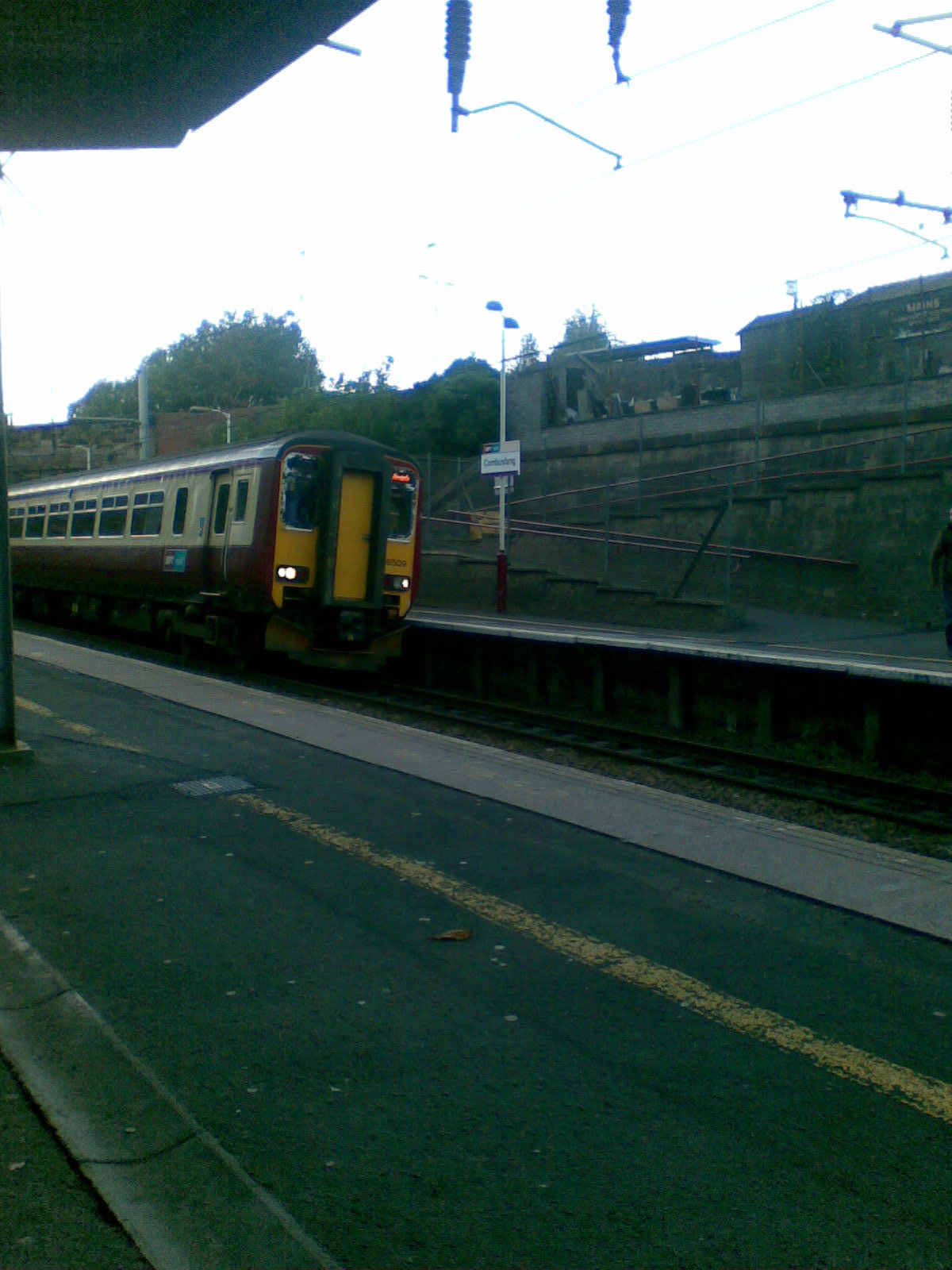 It is 8 km (5 miles) [Quail (1993)] south east of Glasgow Central when travelling on the Polmadie line. The station is located on both the and the which travel from Glasgow Central low and high level respectively. Passenger services are provided by on behalf of (SPT). and services also pass through this station on the West and East Coast Mainline.

The station was planned as part of the , opening on "Blue Trains".

The station originally had two large station buildings on each platform [ [http://www.gordondinnie.com/Station3.jpgGordondinne.com > station pictures > Cambuslang > 1] ] [ [http://www.gordondinnie.com/Station.jpgGordondinne.com > station pictures > Cambuslang > 2] ] , leading directly up to the Main Street; these were later demolished, and one building has been built on the main street containing the ticket office and timetable posters.

The platforms of Cambuslang are located in a cutting between North Avenue and Cambuslang Main Street. The station falls within the G72 postcode area; [ [http://www.firstgroup.com/scotrail/content/travelinfo/station-info.php?stationletter=C First Scotrail Station Facilities] ] the main entrance is from Cambuslang main street. There is also a secondary (non-wheelchair accessible) entrance from North Avenue [ [http://maps.google.com/maps Google Maps] search for [http://www.google.com/maps?ie=UTF-8&oe=UTF-8&hl=en&tab=wl&q= Cambuslang Main Street/North Avenue, Glasgow, Scotland] ] where the majority of Park and Ride passengers leave their vehicles. The station is approximately 5 minutes walk from the nearby supermarket. There is an SPT bus stance outside the station, served by First Bus and McKindless services to and to Main Street.

Westbound services travel "towards" Glasgow Central from the easterly locations. services terminate at the High Level platforms, as did the Hamilton Circle services prior to the opening of the in November 1979. From November 1979, electric services proceeded through the Low Level platforms, to the , terminating at Milgavie, Dalmuir (via Yoker or Singer). When the first opened in 1979, trains also terminated at Dumbarton Central.

Eastbound services travel "away from" Glasgow Central from westerly locations. Trains for the Shotts Line proceed through to Edinburgh Waverley, at times Peak hour trains have terminated at Shotts. Electric trains either travel round the Hamilton Circle in clockwise and counter-clockwise direction, Lanark (express; via Hamilton & Holytown; and via Shieldmuir), Coatbridge Central, and Larkhall.

The in use at Cambuslang is mostly BR Class 334 "Juniper" trains, with some BR Class 318 trains in use. Both the 334 and 318 consist of 3-car trains. At peak (or "rush") hour, two trains are joined together to form 6-cars in order to hold the increased passenger numbers.

In addition the BR Class 156 Diesel trains are also in use on the Glasgow Central High Level - Shotts - Edinburgh line which is (for the main part) not electrified. These are in 2-car trains which at peak hours are doubled together to form 4-cars as two trains.

The platform is capable of handling up to 6 carriages; all trains stop at the top of the platform, in line with the "3/6 car stop" sign.

Cambuslang is completely covered by state-of-the-art CCTV provided by SPT and is completely accessible by Wheelchair from the Main Street entrance. Timetables are posted on the footbridge and staff are on hand to assist passengers; service information will soon be given via a brand new Passenger Information System (screens with service information) that was to be installed by the end of 2006; the installation is currently being made at Cambuslang, but the screens are not functional [ [http://www.firstgroup.com/scotrail/content/home/VIEWnews.php?id=00000000064 First Scotrail News Item Station improvements work (retrieved 19 December 2006)] ] .