Source code
For the 2011 film, see Source Code.
Not to be confused with source coding. 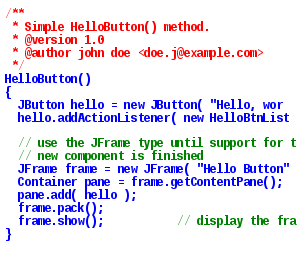 In computer science, source code is text written using the format and syntax of the programming language that it is being written in. Such a language is specially designed to facilitate the work of computer programmers, who specify the actions to be performed by a computer mostly by writing source code, which can then be automatically translated to binary machine code that the computer can directly read and execute. An interpreter translates to machine code and executes it on the fly, while a compiler only translates to machine code that it stores as executable files; these can then be executed as a separate step.

Most computer applications are distributed in a form that includes executable files, but not their source code, which is useful to a user, programmer, or system administrator who wishes to modify the program or understand how it works.

The source code which constitutes a program is usually held in one or more text files stored on a computer's hard disk; usually these files are carefully arranged into a directory tree, known as a source tree. Source code can also be stored in a database (as is common for stored procedures) or elsewhere.

Source code also appears in books and other media; often in the form of small code snippets, but occasionally complete code bases; a well-known case is the source code of PGP.

The notion of source code may also be taken more broadly, to include machine code and notations in graphical languages, neither of which are textual in nature. An example from an article presented on the annual IEEE conference on Source Code Analysis and Manipulation:[1]

For the purpose of clarity ‘source code’ is taken to mean any fully executable description of a software system. It is therefore so construed as to include machine code, very high level languages and executable graphical representations of systems.[2]

The code base of a programming project is the larger collection of all the source code of all the computer programs which make up the project.

It has become common practice to maintain code bases in version control systems.

The source code for a particular piece of software may be contained in a single file or many files. Though the practice is uncommon, a program's source code can be written in different programming languages.[3] For example, a program written primarily in the C programming language, might have portions written in assembly language for optimization purposes. It is also possible for some components of a piece of software to be written and compiled separately, in an arbitrary programming language, and later integrated into the software using a technique called library linking. This is the case in some languages, such as Java: each class is compiled separately into a file and linked by the interpreter at runtime.

Yet another method is to make the main program an interpreter for a programming language[citation needed], either designed specifically for the application in question or general-purpose, and then write the bulk of the actual user functionality as macros or other forms of add-ins in this language, an approach taken for example by the GNU Emacs text editor.

Moderately complex software customarily requires the compilation or assembly of several, sometimes dozens or even hundreds, of different source code files. In these cases, instructions for compilations, such as a Makefile, are included with the source code. These describe the relationships among the source code files, and contain information about how they are to be compiled.

The revision control system is another tool frequently used by developers for source code maintenance.

Source code is primarily used as input to the process that produces an executable program (i.e., it is compiled or interpreted). It is also used as a method of communicating algorithms between people (e.g., code snippets in books).[4]

Programmers often find it helpful to review existing source code to learn about programming techniques.[4] The sharing of source code between developers is frequently cited as a contributing factor to the maturation of their programming skills.[4] Some people consider source code an expressive artistic medium.[5]

Porting software to other computer platforms is usually prohibitively difficult without source code. Without the source code for a particular piece of software, portability is generally computationally expensive.[citation needed] Possible porting options include binary translation and emulation of the original platform.

Decompilation of an executable program can be used to generate source code, either in assembly code or in a high level language.

Programmers frequently adapt source code from one piece of software to use in other projects, a concept known as software reusability.

Software, and its accompanying source code, typically falls within one of two licensing paradigms: free software and proprietary software.

Generally speaking, software is free if the source code is free to use, distribute, modify and study, and proprietary if the source code is kept secret, or is privately owned and restricted. Note that "free" refers to freedom, not price. Under many licenses it is acceptable to charge for "free software". The first free software license to be published and to explicitly grant these freedoms was the GNU General Public License in 1989. The GNU GPL was originally intended to be used with the GNU operating system. The GNU GPL was later adopted by other non-GNU software projects such as the Linux kernel.

Legal issues in the United States

One of the first court cases regarding the nature of source code as free speech involved University of California mathematics professor Dan Bernstein, who had published on the internet the source code for an encryption program that he created. At the time, encryption algorithms were classified as munitions by the United States government; exporting encryption to other countries was considered an issue of national security, and had to be approved by the State Department. The Electronic Frontier Foundation sued the U.S. government on Bernstein's behalf; the court ruled that source code was free speech, protected by the First Amendment.

The way a program is written can have important consequences for its maintainers. Coding conventions, which stress readability and some language-specific conventions, are aimed at the maintenance of the software source code, which involves debugging and updating. Other priorities, such as the speed of the program's execution, or the ability to compile the program for multiple architectures, often make code readability a less important consideration, since code quality depends entirely on its purpose.