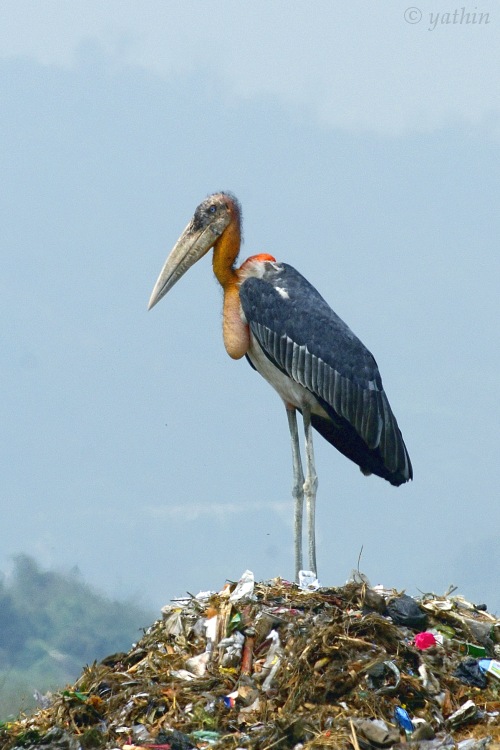 The Greater Adjutant, "Leptoptilos dubius" is a large wading in the family . It formerly bred in southern from Pakistan and , east to , but is now restricted to two separate small breeding populations; in and . In winter, this species migrates south to , and .

The Greater Adjutant is a huge bird, typically 145-150 cm (57-60 in) tall with a 250 cm (99 in) wingspan. There are no records of the weight of wild birds, but they may be the heaviest species of stork. Its upper body and wings are black, but the belly and undertail are off-white or pale grey. The pink head and neck are bare like those of a . The yellow bill is long and thick. Juveniles are a duller version of the adult.

Most storks fly with neck outstretched, but the three "" species retract their neck in flight like a .

The Greater Adjutant breeds in tropical wetlands. It builds a stick nest in trees and lays between two to four eggs which are incubated by both parents for 28-30 days to hatching. It often forms small colonies.

The Greater Adjutant, like most of its relatives, feeds mainly on s and large s, but also young birds, s and s. It will also eat , for which its bare head and neck is an adaptation, and will feed in human refuse dumps.

Loss of nesting habitat and feeding sites through drainage, pollutions and disturbance, together with hunting and egg collection has caused a massive decline in the population of this species. The current population is estimated at less than 1,000 individuals. The Greater Adjutant is evaluated as on the of Threatened Species.

* Database entry includes a range map and justification for why this species is endangered
* Grimmett, Inskipp and Inskipp; "Birds of India". ISBN 0-691-04910-6