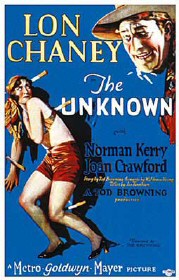 "The Unknown" (1927) is a silent directed by and featuring Lon Chaney as carnival knife thrower Alonzo the Armless and as the scantily clad carnival girl he hopes to marry.

"The Unknown" is by far the most intense and demented of director 's films (which include "Dracula" and ""). always said that she learned more about acting from working with Chaney in this movie than from everything else in her long career put together, and critics often cite Chaney's performance as one of the greatest ever captured on film. always maintained that Chaney's portrayal in "The Unknown" was the most emotionally compelling film performance he had ever seen an actor give. Chaney also did remarkable and convincing collaborative scenes with real-life armless double Paul Desmuke (sometimes credited as Peter Dismuki), whose legs and feet were used to manipulate objects such as knives and cigarettes in frame with Chaney's upper body and face.

As with "Freaks", contemporary reviewers were sometimes less appreciative. "A visit to the dissecting room in a hospital would be quite as pleasant," opined the "", "and at the same time more instructive." Modern viewers can discern the same macabre style of this film (and other Browning-Chaney collaborations) in later productions ranging from the horror films to the "Twilight Zone" and "" programs.

For many years the film was available only in an incomplete 9.5 mm copy, until a much higher quality 35 mm print was found preserved in a French film archive in the early-. Several scenes from the early part of the film are still missing, but these do not seriously affect the story continuity.

Alonzo the Armless (Lon Chaney) is a circus freak who, while armless, uses his feet in place of arms. This includes tossing knives in the circus show. Alonzo, however, is an impostor and fugitive. He still secretly has both of his arms, but keeps them bound to his torso, with the aid of his friend Cojo, to keep his real identity secret. Alonzo's right hand has a double thumb, which would be easily recognized if his hands were revealed.

While at the circus, he falls for Nanon (), the daughter of the circus owner. The local circus strongman is also attracted to Nanon, but she cannot stand being touched by a man, and shuns him. She keeps a friendship with Alonzo, whom she believes to be armless and therefore unable to touch her.

When the circus owner discovers Alonzo's secret, Alonzo kills him with his bare hands. Nanon witnesses this through a window. A flash of lightning enables Nanon to see that her father's killer has a double thumb on his right hand, but she does not see his face. Since Alonzo is believed to be armless, he is not a suspect in the murder. Later, Nanon and Alonzo begin living together, but Alonzo quickly realizes she will not love him as long as he still has his arms. Alonzo leaves under the guise of an illness, however, he secretly visits a surgeon and has both of his arms removed. While he is away, Nanon overcomes her phobia about being touched and falls in love with the circus strongman.

When Alonzo (now truly armless) returns to Nanon, she excitedly tells him about her love for the strongman. Alonzo is shocked and horrified, both laughing and crying, confusing the couple. He then learns the strongman and Nanon have a new act where the strongman's arms are pulled by two horses on treadmills with Nanon whipping the horses on from atop a large platform. During one of the performances, Alonzo speeds up the treadmills in an attempt to maim or kill the strongman. When Nanon jumps from the platform to calm down one of the horses, Alonzo tries to save her from injury by pushing her out of the way. The horse, however, knocks Alonzo to the ground, stomps on him and kills him.

In the original film script and some discarded filmed sequences, Alonzo murders both the doctor who removed his arms and his own loyal assistant Cojo, to eliminate them as witnesses before he returns to claim Nanon.