Natural burial is a process by which the body of a deceased person is interred in the soil in a manner that does not inhibit decomposition and allows the body to recycle naturally. It is seen as an alternative to contemporary Western burial methods.

The body may be prepared without chemical preservatives or disinfectants such as embalming fluid that may destroy the microbial decomposers active in breaking the body down. It may be buried in a biodegradable coffin, casket, or shroud. The grave does not use a burial vault or outer burial container that prohibits the body's contact with soil. The grave should be dug to a depth shallow enough to allow microbial activity similar to that found in composting. Natural burials can take place on both private land (per regulations) and in any cemetery that will accommodate the vault-free technique. 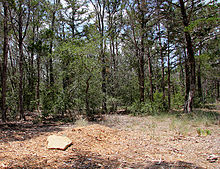 A natural burial grave site. The existing landscape is modified as little as possible. Only flat stone markers are allowed.

The act of natural burial is distinct from landscaping management techniques (sustainable agriculture, restoration ecology, habitat conservation projects, permaculture, etc.). These may vary widely from site to site and are used to maintain the burial area in perpetuity. Landscaping methods may enhance or slow down the decomposition rate of bodies, depending upon soil-system factors.

Embalming's secondary purpose is to temporarily retard decomposition for viewing and as such it can be deemed inconsistent with the objectives of natural burial. Non-toxic and naturally derived embalming fluids without formaldehyde cure most objections to ground contamination.

No state or province in North America requires routine embalming of bodies. When specified by state ordinance (usually within 24 hours of death), mechanical refrigeration or chilling by using dry ice or some other method can be substituted for embalming. The goal of cooling is to lower the body's temperature below 36 degrees F, retarding the microbial growth present during decomposition. Many cultures around the world use no artificial cooling at all, and bodies are regularly held for several days prior to final disposition.

Special circumstances such as an extended time between death and burial and transportation of remains on commercial flights that do not currently permit unembalmed bodies to travel may necessitate embalming.

The most common embalming fluid is composed of organical chemical and contains a 5-29% formaldehyde, ethanol and water. This solution is technically biodegradable over time, but it cross-links proteins found in tissue cell membranes; slowing bacterial decomposition and inhibits the body's breakdown in the earth. The potential for embalming fluid to contaminate soil or water tables has not been studied thoroughly, though is unlikely because of formaldehyde's reaction in an alkaline environment, such as some soils, but it must be noted that not all soils are alkaline; the formaldehyde goes through the Cannizzaro reaction and becomes Urotropin, which is commonly used as a hardener in foundry molds.

Formaldehyde is a suspected carcinogen and can have deleterious health effects for workers exposed to it in high quantities. It is implicated in cancer, ALS, nervous system disorders, and other ailments. OSHA can require embalmers to wear respirators if the Permissible Exposure Limit air exchange allowance is surpassed, which may put funeral home workers at risk.

Natural coffins are made from materials that readily biodegrade. Ideally, the materials are readily renewable or recycled, with less embodied energy in the production equation.

Coffins (tapered shoulder shape) and caskets (rectangular shape) are made from a variety of materials. Most of them are not biodegradable. 80-85% of the caskets sold for burial in North America [1] in 2006 were stamped steel. Solid wood and particle board (chipboard) coffins with hardwood veneers comprise 10-15% of the sales, with fiberglass and alternative materials (such as woven fiber) making up the rest.In Australia 85-90% of coffins are solid wood and particle board.

Most traditional caskets in the UK are made from chipboard covered in a thin veneer. Handles are usually plastic designed to look like brass. The chipboard requires glue to stick the wood particles together. Some glues that are used, such as those that contain formaldehyde, are seen as environmentally unfriendly. There is concern that such glues will cause pollution when they are burned during cremation or degrading in the ground. However, not all engineered wood products are produced using formaldehyde glues.

Caskets and coffins are often manufactured using exotic and in some cases endangered species of wood and designed to prevent decomposition. While there are generally no restrictions on the type of coffin used, most sites encourage the use of environmentally friendly coffins made from cardboard or wicker. A simple cotton shroud is another option.

A natural burial ground often utilizes a variety of memorialization techniques that vary from designer to designer - the prohibition of headstones, tributes, and other common markers is up to each individual cemetery and its users. Planting trees, shrubs, and flowers on or near the grave establishes a living memorial and helps create habitat.

Irrigation, pesticides, herbicides, and synthetic fertilizers may be significantly reduced or eliminated altogether, in favor of non-toxic and less resource-dependent vegetation support and control.

Each year, 22,500 cemeteries across the United States bury approximately:

The practice of natural burial dates back thousands of years but has been interrupted in modern times by "technological advances" (vaults, liners, embalming, mausoleums, etc.) that mitigate the decomposition process. In the late 19th century Sir Francis Seymour Hayden proposed "earth to earth burial," in a pamphlet of the same name, as an alternative to either cremation or the slow putrefaction of encased corpses.

The first woodland burial ground was created at Carlisle Cemetery by retired Cemeterian Ken West, in the United Kingdom in 1993 and was called woodland burial. Greenhaven Woodland Burial Ground in the village of Lilbourne, Rugby, was the first privately owned natural burial ground when it opened a year later. Over 200 dedicated natural burial sites have been created in the UK, and the industry in the UK has a code of practice administered by The Association of Natural Burial Grounds.[5]'

The Association of Natural Burial Grounds (ANBG) was established by The Natural Death Centre in 1994. Its aims and objects have remained unchanged. It seeks to assist people in the process of establishing sites, to provide guidance to burial ground operators and to represent its members as a whole, and, not least, the Association has a Code of Conduct for members thus providing the public with assurance as to long-term security. On their website is a comprehensive UK directory of all the Natural Burial Grounds.

The Natural Death Centre (NDC) is a charity run by Rosie Inman-Cook that is dedicated to encouraging openness around death and dying, particularly through funerals, and to imagining creative, sustainable solutions to the practical and spiritual problems of our mortality. They also publish and sell The Natural Death Handbook, which is a 'must read' for anyone interested in this subject.

Ken West, professional cemeterian from 1961–2006, and life-long amateur naturalist, introduced woodland burial as a concept to the City of Carlisle in England in 1993, leading with a "Living Churchyard" project that returned owls, voles, and other creatures to the city cemetery by ending mowing and adding wildflowers and forage. West's achievements include being instrumental in establishing the Association of Natural Burial Grounds; creating the Charter for the Bereaved; being awarded an MBE by HRH Prince Charles in 2002 for services to burial and cremation; advising Parliament on managing pandemics and creating environmental burial services; current judge for annual UK natural burial competition; senior technical advisor for the Sustainable Cemetery Management Group and Natural End, a non-profit US organization that helps municipal and non-profit cemeteries to transition to sustainable alternatives.

Billy Campbell, a rural doctor, an environmentalist, and a pioneer in the Green Burial Movement in the USA, opened the first modern "green cemetery" in North America.

Joe Sehee is a leading advocate of the Green Burial Movement in the United States. Joe is the executive director of the Green Burial Council, an organization he founded to encourage sustainability in the death care industry and to use the burial process as a means of facilitating ecological restoration and landscape level conservation.

Tyler Cassity rose to prominence in the death care industry by taking a bankrupt cemetery in the center of Los Angeles on the southern boundary of Hollywood and turning it into Hollywood Forever, where he had movies projected on the side of Rudolph Valentino’s mausoleum, and displayed his “LifeStories,” which are A&E-style video biographies of the dead. His cemetery is the final resting place to many of Hollywood's legends. Tyler Cassity has been involved in several films [6] and has worked as a consultant on HBO's Six Feet Under.

The Fernwood Burial Ground in Marin County's Mill Valley dates from the 19th century and is adjacent to the Golden Gate National Recreation Area. Tyler Cassity's Forever Enterprises purchased it in 2004. The Fernwood property is 32 acres (130,000 m2) with most of it set aside for natural burial with no tombstones or caskets. Instead, bodies are buried there in ways that aid natural decomposition, and survivors can locate their loved-ones’ burial site with a handheld device that contains a GPS location finder.

Mary also a long-time member of the Finger Lakes Land Trust, which protects 8,000 acres (32 km²) in the Finger Lakes and Southern Rivers regions, the Cayuga chapter of Keeping Track (a national organization working with local groups around the country that document the presence of keystone wildlife species in their areas, the better to inform decisions about local and regional land use), a task force looking at conservation zoning in her township of Danby, the Society of Environmental Journalists, the Society of Conservation Biology, and the National Association of Science Writers.

Theresa Purcell currently serves as board president of the green burial land trust Trust for Natural Legacies.[7] As a 501(c)3 non-profit, Trust for Natural Legacies is both a traditional land trust working to establish cemetery nature preserves and also establishing itself as a "natural burial" cemetery umbrella organization where other green cemeteries can network directly with each other, share best practices and engage in continuing professional education (similar to what the Land Trust Alliance offers to nature preserves and the International Cemetery, Cremation & Funeral Association offers for cemeteries). TNL is based out of Minneapolis, MN and operates in the Midwestern states of Minnesota, Wisconsin, Illinois, Iowa, and Michigan.

Selena Fox is founder and director of Circle Cemetery, located at Circle Sanctuary Nature Preserve in southwestern Wisconsin and one of the first Green Cemeteries in North America. Fox has been conducting Green funerals and memorials for more than thirty years as part of her work as senior minister of Circle Sanctuary, an international Wiccan church which she founded in 1974. She is an advocate and media spokesperson for Greening the End of life – interviews with her have been carried in a variety of broadcast and in-print media sources as well as on-line over the years.

Mike Salisbury is a leading advocate of the natural burial movement in Canada and the current president of the Natural Burial Co-operative in Toronto.[8] The principal of Earthartist Planning and Design, Salisbury provides planning design and consultation to groups throughout North America involved in establishing new natural burial grounds.[9]

The Natural Burial Association (NBA) is an independent, non-profit organization established to help reduce the environmental impacts of conventional death care practices through education and awareness, and to leverage the sustained popularity of burial towards the acquisition, renewal and permanent protection of Canada’s natural lands for the benefit of people and the environment. [10]

Muslim law instructs the deceased to be washed and buried without a coffin, with only a wrapping of white cloth in order to preserve dignity of the deceased, which is sometimes perfumed. No chemical preservatives or embalming fluid is used, nor is there a burial vault or casket, similar to the principles of natural burial. Coffins are used, however, in countries such as the United Kingdom where the law requires it.