Nochebuena
This article is about a traditional custom in Spain, Latin America, and the Philippines. For the flower called "Noche Buena", see Poinsettia. 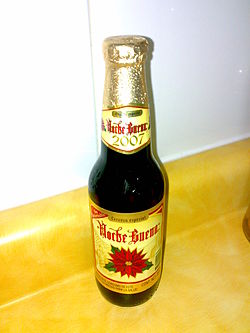 Nochebuena, (literally "Good Night"), is a Spanish word referring to the night of Christmas Eve.[1] In Spain, Cuba, Latin America, and the Philippines, the evening consists of a traditional dinner with family.