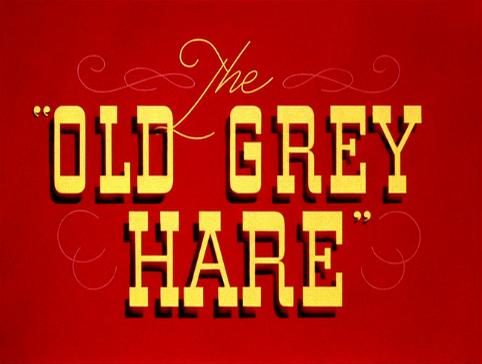 
"The Old Grey Hare" is a cartoon in the series, directed by , written by , music by . Starring an older and young and (voiced by and respectively). It was the first Bugs Bunny cartoon to be produced by after sold the studio to WB.

The title is a double play on words. One is the typical pun between "hare" and "hair", with the bunny (who was already grey-haired) rendered "old and grey" for this cartoon. The title also refers to the old song, "". Some theater cards for this cartoon gave the alternate spelling, "The Old Gray Hare".

The cartoon starts with Elmer sitting under a tree, crying over never being able to catch Bugs. The "voice of " (also the voice of ) tells Elmer that he would eventually catch him, and proceeds to transports him "far into the future" past the years 1950, 1960, 1970, etc., until reaching the then-distant year of 2000

This offers the chance to use some contemporary gags with a futuristic twist, as Elmer finds a year 2000 newspaper. One headline says, "Smellevision Replaces : Sez It Will Never Work!" In sporting news, "'s Horse Hasn't Come In Yet!" (Crosby was known for investing in racehorses that did poorly).

By now, both Elmer and Bugs are very old and wrinkled ("What's up, prune-face?") - Bugs even has a large white beard and a cane - and - but their chase resumes. This time Elmer is armed with a "" ray gun. After a short chase (at slow speed, due to their ages), Elmer gets the upper hand, shooting Bugs with his ultra-modern weapon.

At the moment when it seems Elmer has finally beaten his nemesis, the apparently dying Bugs thinks back to when he and Elmer were much younger. This leads to a flashback sequence with a baby Elmer hunting a baby Bugs (both are still in diapers; Bugs, whose "baby" voice is virtually identical to the normal voice of Blanc's , is drinking carrot juice from a baby bottle; Elmer is crawling and toting a pop-gun; and they interrupt their chase to take a baby nap-time together.)

After the flashback is over, a tearful Bugs starts to dig his own grave, with Elmer getting equally emotional. Just at the point where it seems that Bugs is going to bury himself, he switches places with the weeping and distracted Elmer, and cheerfully buries him alive instead ("So long, !") The buried Elmer quips, "Weww anyway, that pesky wabbit is out of my wife [life] fowevew and evew!" However, Bugs suddenly pops in and repeats the popular catchphrase of the "Richard Q. Peavey" character from "", "Well, now, I wouldn't say "that"," plants a kiss on Elmer, then hands him a large firecracker with a lit fuse, and quickly departs. The cartoon immediately irises out with the wide-eyed Elmer scrambling and Clampett's vocalized "bay-woop!" sound. The "That's All Folks!" end title card appears (with the text having already been pre-written), and then rattles to the sound of the bomb exploding off-screen, while the closing theme plays (see Censorship for information about this ending).

* Dubbed versions of this cartoon that have aired on the Turner Networks (Cartoon Network, TNT, and TBS) and on local TV affiliates have a standard "Dubbed Ending" card to replace the pre-written one that shakes in reaction to the explosion in the final scene of the cartoon (although the explosion can still be heard in the background). On the "June Bugs" marathon in 1997 and "The Bob Clampett Show", Cartoon Network aired the original version with the shaking title card.
* The WB! airing of this cartoon cut the part where baby Elmer points his toy gun at baby Bugs and baby Bugs breaks his bottle of carrot juice over baby Elmer's head.

* This cartoon is notable as one of the earliest instances of being featured, something that would become a trend in the 80's after the appearance of the , and would lead to the (somewhat ironic) creation of "", which also featured young versions of Bugs and Elmer (as well as other popular characters).
* The cartoon is a rare instance of falling out of character while voicing Elmer. When he says, "This is a picture of me when I was a wittow baby", he mistakenly pronounces the "r" in "picture" instead of rounding it off as Elmer typically does.
* This is the only theatrical Bugs Bunny cartoon in which Bugs does not feature in his normal form. He appears as the older and younger versions of himself, but never as the familiar Bugs Bunny.
* The model sheets for this cartoon refer to the young and old versions of Bugs as, respectively, "Baby Buggsy Bunny" and "Gran'pappy Bugs"; and the young and old versions of Elmer as "Baby Elmer" and "Old Man Fudd."

The short occurs in its entirety (with the shaking end card) in the documentary " Part 2", which is available as a special feature on Disc 2 of the ', and was released independently on the '.