Oriya cuisine (ଓଡିଆ ରାନ୍ଧଣା) refers to the cooking of the eastern Indian state of Orissa. Foods from this area are rich and varied, while relying heavily on local ingredients. The flavors are usually subtle and delicately spiced, quite unlike the fiery curries typically associated with Indian cuisine. Fish and other seafood such as crab and shrimp are very popular. Chicken and mutton are also consumed,but somewhat occasionally. Only 6% of the population of Orissa is vegetarian, and this is reflected in its cuisine. The oil base used is mostly mustard oil,but in festivals ghee is used. Panch phutana, a mix of cumin, mustard, fennel, fenugreek and kalonji (nigella) is widely used for tempering vegetables and dals, while garam masala (curry powder) and haladi (turmeric) are commonly used for non-vegetarian curries. Pakhala, a dish made of rice, water, and yoghurt, that is fermented overnight, is very popular in summer, particularly in the rural areas. Oriyas are very fond of sweets and no Oriya repast is considered complete without some dessert at the end.Festivals and fasts witness a cuisine without onion and garlic whereas other days witness an aroma of garlic and onion paste in curries.One can find restaurants serving food without onion and garlic in major places like Puri and other coastal area,which is run by many Brahmin owners.

Oriya influence in other cuisines

Orissa has a culinary tradition spanning centuries if not millennia. The kitchen of the famous Jagannath temple in Puri is reputed to be the largest in the world, with a thousand chefs, working around 752 wood-burning clay hearths called chulas, to feed over 10,000 people each day.

Rasagolla, one of the most popular desserts in India, is in fact an Oriya invention. It had been enjoyed in Orissa for centuries before being passed on to neighboring Bengal. The well-known rice pudding, kheeri (kheer) that is relished all over India, also originated in Puri two thousand years ago.

In fact, some well-known recipes, usually credited to Bengal, are of Orissan origin. This is because during the Bengal renaissance, bramhin cooks from Orissa, especially from Puri, were routinely employed in richer Bengali households. They were famed for their culinary skills and commonly referred to as Ude Thakurs (Oriya chefs). As a result, many Oriya delicacies got incorporated into the Bengali kitchen.

A typical meal in Orissa consists of a main course and dessert. Typically breads(roti,paratta) are served as the main course for breakfast, whereas rice is eaten with lentils dal during lunch and dinner.The breakefast consists of chuda(poha,flattened rice),mudhi(muri or puffed rice),chuda can be eaten either as fried or with curd-banana-sugar(called as Chudaa Dahi).Mudhi is a famous snack in north Orissa.Different pitha also form breakfast menu. The main course in lunch includes one or more curries, vegetables and pickles. Given the fondness for sweet foods, the dessert course may include generous portions of more than a single item. Oriya desserts are made from a variety of ingredients, with milk, chhenna (a form of cottage cheese), coconut, rice, and wheat flour being the most common. 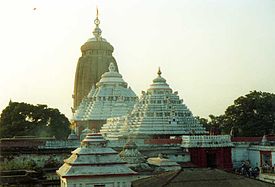 The famous Jagannath temple in Puri, Orissa: home of the original Rasagolla and the Khiri. Its kitchen is reputed to be the largest in the world, with several hundred chefs working around 752 wood-burning clay hearths to feed over 10,000 people each day. 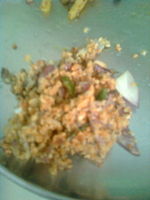 Oriya curries are not full of masala floating in oil,rather these are mildly spiced and given the original taste of the ingredients.Around the areas Coastal Orissa the food is sweet (coconut,ghee, jaggery is used on account of the influence of the Jagannath Temple), Chille and curry leaves is used in regions closer to Andhra Pradesh and mustard paste and kala jeera is used mostly all over.The coastline and numerous rivers offer abundant fish, while prawns come from the Chilika Lake. 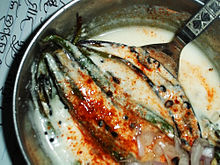 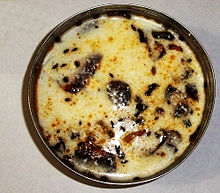 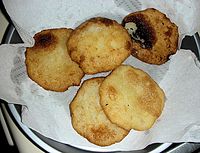