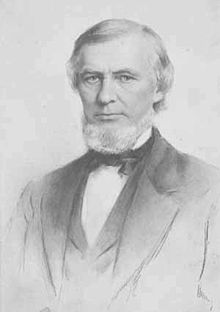 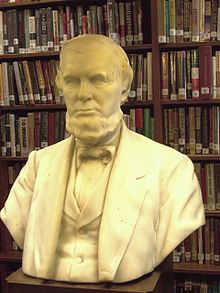 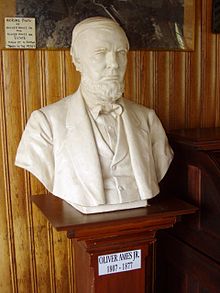 Oliver Ames, Jr., served as president of Union Pacific Railroad (UP) while the railroad was busy building the First Transcontinental Railroad in North America. He was its president pro tem from 1866 until 1868, and was formally elected president of the company on March 12, 1868. He continued as president until March 8, 1871.[3] His tenure was marked by controversy since his 1866 ascent to the presidency was over Thomas C. Durant who had tried to gain the position for himself. Durant filed lawsuits against Ames that stopped construction, and Ames retaliated by garnering support to remove Durant from the railroad's executive committee. A divided board of directors was beyond Ames' management capabilities, and he finally acquiesced to readmitting Durant in 1867, and Crédit Mobilier awarded Ames a new construction contract.[4] In 1873, Ames succeeded his brother as the head of Crédit Mobilier.[3]

The contributions of Ames and his brother Oakes in the building of the Union Pacific are commemorated in the Oliver and Oakes Ames Monument at Sherman Summit, near Laramie, Wyoming, along the original route. The pyramidal monument was designed by famous architect Henry Hobson Richardson (who designed a number of projects for the Ames family) with sculpted plaques of the Ames brothers by Augustus Saint-Gaudens. At the time of its construction, the monument was located at the highest point attained by the Union Pacific's transcontinental route. With a change in the route of the railroad, the monument today is not on any major transportation route.