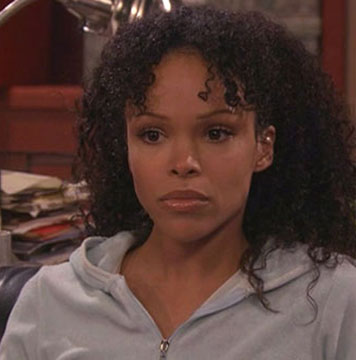 Whitney Harris-Crane (née Russell) is a on the / "". She is played by from the series' debut in July 1999 and last airs in September 2007 when Whitney moves to New Orleans.

Whitney Russell is the eldest daughter of and . has been best friends with Whitney since childhood and Whitney has always proven to be a true friend to Theresa, going to bat for her even when she probably shouldn't. Whitney wasn't big on dating growing up and instead focused on her tennis career at her father's insistence. Whitney always emulated her mother, respecting her as an honorable woman, never knowing the secrets Eve was keeping from her (drug abuse, a son with Julian Crane etc).

Whitney briefly dated a detective named Frank Lomax who was investigating Theresa for stalking Ethan but that relationship fizzled out. Whitney later met Chad Harris, the man who would become the love of her life. Whitney and her sister Simone both fell for Chad, and to spare Simone's feelings, Chad pretended to be her boyfriend for years before the truth came out.

It eventually came out that Chad was Eve's son with Julian, thus Whitney had been sleeping with her half brother and pregnant by him. Whitney began dating (Julian's son and believed to be Chad's half-brother). Whitney passed off her son Miles as Fox's son so Miles wouldn't grow up with the stigma of being born out of .

Eventually, Whitney, wracked with guilt at committing incest with who she believed to be her brother, chose to join a convent to get closer to God. She was manipulated by in a convoluted scheme of his to rule the world. After that crisis, it was discovered that Chad was in fact not the son conceived by Eve and Julian Crane but rather the son of Eve's adopted sister and Julian's father Alistair, conceived when Alistair raped Liz many years earlier.

Whitney and Chad were then free to raise their son without the stigma of incest hanging over them. Whitney wed Chad on-air on Monday, , , and took his last name, becoming known as Whitney Russell Harris-Crane. Chad had begun sleeping with Vincent, a tabloid reporter, during Whitney's stay in the convent and the relationship continued even after Chad and Whitney's reunion. Whitney became suspicious of Chad and discovered the truth when she caught Chad and Vincent in bed together. Whitney declared that she was seeking a divorce. Whitney is also expecting her second child which will be born in January 2008. Whitney was held at gun point by father-in-law Alistair Crane on , and witnessed the shooting of her husband Chad, in which he later died while professing his love for her, their son, and unborn child.

After saying goodbye to Theresa and Eve, Whitney left to New Orleans with her sister Simone, and son Miles. Whitney's father T.C. was said to have also moved down there to help her out. On , Whitney contacted police chief saying she would be willing to testify at her former father in-law (Alistair Crane)'s murder trial.