Founding of the Anglican mission

Britain assumed sovereignty over southeast New Guinea in 1888 and the General Synod of the Church of England in Australia (now the Anglican Church of Australia) then resolved that "...the recent annexation of portion of New Guinea imposes direct obligation upon the Church to provide for the spiritual welfare both of the natives and the settlers."[3] In 1889 the Revd A.A. Maclaren was appointed the first Anglican missionary to the region and in 1890 visited with the Revd Copland King.[4] They purchased land at Samarai for a mission station but Maclaren died at the end of 1891 and King withdrew to Australia;[5] in 1892 King returned to Dogura and built a mission house and two South Sea Islands teachers joined him in 1893 and were placed at Taupota and Awaiama; in 1894 a teacher was placed at Boiani.[6] The Right Revd Montagu John Stone-Wigg was appointed Bishop of New Guinea and spent 10 years there, establishing stations at Wanigela[7] and Mukawa on Collingwood Bay in 1898 and Mamba at the mouth of the Mambare River in 1899: by 1901 there were eleven stations along the coast of north Papua (in what are now Northern (Oro) and Milne Bay Provinces) and Anglican influence had extended along 480 km of coast.[6] The Cathedral of SS Peter and Paul[8] in Dogura, Milne Bay Province, is the largest Anglican church in Papua New Guinea. It seats 800, was consecrated in 1939 three years before the outbreak of war in the South Pacific and survived the traumatic Japanese occupation of Papua New Guinea during World War II.[9] 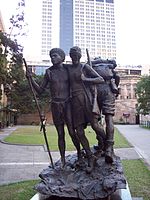 Statue in Brisbane, Australia of Raphael Aimbari, an Oro man, leading a blinded Australian soldier during the New Guinea Campaign

The Japanese had put ashore troops in Papua near Gona by July 1942 with a view to taking Lae and Salamaua.[10] The Japanese did not harass or occupy Dogura mission itself and services continued in the cathedral throughout the war, with congregations amply enlarged by visitors from the Australian and American armed forces.[11] However, the Anglican Church elsewhere fared less well. In Anglican terminology the New Guinea Martyrs were eight Anglican clergy, teachers and medical missionaries killed by the Japanese in 1942,[12] the Anglican Bishop of New Guinea (then a diocese of the ecclesiastical Province of Queensland) Philip Strong having instructed Anglican missionaries to remain at their posts despite the Japanese invasion. Three hundred thirty-three church workers of various denominations were killed during the Japanese occupation of New Guinea.

A statue of Lucian Tapiedi, the one indigenous Papuan[13] among the Anglican martyrs of New Guinea, is installed among the niches with other 20th century Christian martyrs from the wider Church, over the west door of Westminster Abbey in London.[14]

Postwar recovery was hindered by the eruption on 21 January 1951 of Mount Lamington, which devastated Higatura, which contained the Martyrs' School and the main mission centre, where a diocesan synod was in progress — both were destroyed — and Sangara, the Northern District Headquarters, where everyone was killed.[15]

Martyrs' School was subsequently re-established at Popondetta, where its eponym for obvious reasons came generally to refer to the hundreds of victims of the Mount Lamington eruption who died precisely because they were involved in church work at the time of the eruption.

The Most Revd Sir David Hand served as archbishop from 1977 until 1983. The Most Rev'd George Ambo succeeded him from 1983 to 1989, becoming the first indigenous Papua New Guinean to hold the position.[16] The Most Rev'd Joseph Kopapa has served in that role since 2010.[17]

Since it was historically part of the ecclesiastical province of Queensland, the Anglican Board of Mission—Australia (ABM-A) (previously Australian Board of Mission) has provided ongoing personnel and material support to the church. Today that support takes the form of funding for theological training, ministry, evangelism and building the church's capacity for community development and enhanced provision of vital social services such as education and health, including HIV/Aids.

The Anglican mission was not well funded in years past and it did not compare favourably with other Christian denominations in Papua New Guinea in terms of health and education services. Roman Catholic, Lutheran, Congregationalist and Methodist missions elsewhere in the country established plantations and other commercial enterprises by way of funding mission activities and were able to recruit Polynesian mission staff from elsewhere in the South Pacific. The Anglican mission, centred in Oro and Milne Bay, which were in early years less amenable to commercial enterprise, and without a substantial mission presence elsewhere in the South Pacific, lacked these resources and depended on mission funds and personnel in Australia and England. 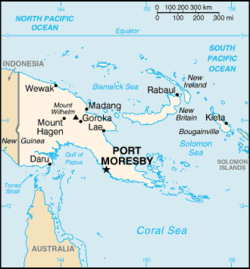 In accordance with early concordats among European missionaries by which they agreed not to engage in undue competition with each other, Anglican missionary activity was largely confined to the Northern and Milne Bay Districts of Papua; the Oro (Northern) Province remains the only civil province of Papua New Guinea of which a majority of the population are Anglican.

There are pockets of Anglicans in the Western Highlands (and Archbishop James Ayong of the diocese of Aipo-Rongo — Mount Hagen — is the current primate), in the western extremity of West New Britain and of course, significantly, in Port Moresby where the core constituency of Oro and Wedau people is supplemented by foreign residents of the city.[19]

The polity of the Anglican Church of Papua New Guinea is episcopalian, as with all Anglican churches. The church maintains a system of geographical parishes organised into dioceses. There are five of these, each headed by a bishop. There are no metropolitical dioceses as such and the Primate and Archbishop of Papua New Guinea may be any one of the five diocesan bishops, who concurrently retains his designation as bishop of his diocese. (Unlike in some other Anglican provinces, all clergy and bishops are male.)

Liturgical translations into local languages, such as Wedau, Ubir, Mukawa and Binandere,[21] were an early part of the first missionaries' work. Today, a local variant of the Book of Common Prayer is used, couched in the simplified English of the Good News Bible and with similar illustrations. A conundrum for the Church has been the question of an appropriate common liturgical language in the Papua New Guinean environment of radical, indeed extreme, multiculturalism. New Guinea Pidgin is an official language of the country and is spoken and understood by more Papua New Guineans than any other, but it is little known in the Anglican heartland of Oro and Milne Bay Provinces. An anglphone Anglican Church of Papua New Guinea hymn book was published in the early 1980s which contains a strictly limited number of hymns from a variety of traditions.

The churchmanship, as amply demonstrated by the Papua New Guinea Prayer Book, is Anglo-Catholic: the normative Sunday service is the Eucharist, commonly referred to as "Mass"; Mattins is virtually unknown; clergy are addressed as "Father" (there are no women clergy, although the United Church has ordained women for many years, substantially based as it is among New Guinea Islands cultures which have a tradition of strong women leaders and matrilineal inheritance). Religious orders — the Melanesian Brothers and the Anglican Franciscans — play a considerable role in the life of the church. Oro tapa cloth is a characteristic feature of church decoration and liturgical vestments, as befits a denomination substantially characterised by Oro people, and church festivals are often marked by congregants appearing in traditional Oro dress, with Oro drumming and singing.

The Anglican Church of Papua New Guinea participates in the Melanesian Council of Churches and despite the obviously closer social and religious ties of overseas Anglicans with overseas equivalents of the United Church maintains especially close ties with the Evangelical Lutheran and Roman Catholic Churches.