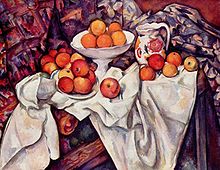 Apples and Oranges, by Paul Cézanne. 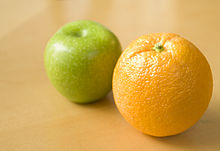 An apple and an orange

A comparison of apples and oranges occurs when two items or groups of items are compared that cannot be validly compared.

The idiom, comparing apples and oranges, refers to the apparent differences between items which are popularly thought to be incomparable or incommensurable, such as apples and oranges. The idiom may also be used to indicate that a false analogy has been made between two items, such as where an apple is faulted for not being a good orange.

Not all apples are alike.

The idiom is not unique. In Quebec French, it may take the form comparer des pommes avec des oranges (to compare apples and oranges), while in European French the idiom says comparer des pommes et des poires (to compare apples and pears). In Latin American Spanish, it is usually comparar papas y boniatos (comparing potatoes and sweet potatoes) or comparar peras con manzanas (comparing pears and apples). In some other languages the term for orange derives from apple, suggesting not only that a direct comparison between the two is possible, but that it is implicitly present in their names. Fruit other than apples and oranges can also be compared; for example, apples and pears are compared in Danish, Dutch, German, Spanish, Swedish, Croatian, Czech, Romanian, Hungarian, Italian, Slovene, Luxembourgish, Bosnian, and Turkish. However, apples are actually more closely related to pears (both are rosaceae) than to oranges. In fact, in the Spanish-speaking world, a common idiom is sumar peras con manzanas, that is, to add pears and apples. The same thing applies in Romanian where a popular idiom is a aduna merele cu perele, that is again, to add apples and pears.

Some languages use completely different items, such as the Serbian Поредити бабе и жабе (comparing grandmothers and toads), or the Romanian baba şi mitraliera (the grandmother and the machine gun); vaca şi izmenele (the cow and the longjohns); or țiganul şi carioca (the gypsy and the marker), or the Welsh mor wahanol â mêl a menyn (as different as honey and butter), while some languages compare dissimilar properties of dissimilar items. For example, an equivalent Danish idiom, Hvad er højest, Rundetårn eller et tordenskrald? translates literally as What is highest, the Round Tower or a thunderclap? In Russian, the phrase сравнивать тёплое с мягким (to compare warm and soft) is used. In British English, the phrase chalk and cheese means the same thing as apples and oranges. In Argentina, a common question is ¿En qué se parecen el amor y el ojo del hacha? which translates into What do love and the eye of an axe have in common? and emphasizes dissimilarity between two subjects; in Colombia, a similar (though more rude) version is common: confundir la mierda con la pomada, literally, to confuse shit with apple salve. In Polish, the expression co ma piernik do wiatraka? is used, meaning What has (is) gingerbread to a windmill?.

A number of more exaggerated comparisons are sometimes made, in cases in which the speaker believes the two objects being compared are radically different beyond reproach. For example "oranges with orangutans", "apples with dishwashers", and so on. In English, different fruits, such as pears, plums, or lemons are sometimes substituted for oranges in this context.

Sometimes the two words sound similar. This is true for the Romanian merele cu perele (apples and pears) and the Hungarian szezont a fazonnal (the season with the fashion).

A Hungarian expression with a somewhat modified meaning and construction is ízlések és pofonok (smacks and slaps). It refers to the fact that you cannot decide which one is better from things that depend only on the different tastes/preferences of people, just as you cannot compare two slaps in the face if they are received by separate people.

Further, the phrase "apples-with-apples comparison" is used when an attempt is made to make sure that the comparison is fair; for example, adjusting for inflation during a discussion of wages. [1]

Criticism of the idiom

Various scholars have questioned the premise of the incomparable nature of apples and oranges, both in serious publications and in weblogs and spoofs (see below). These criticisms of the idiom, however, tend to assume that you cannot compare apples and oranges is a descriptive statement capable of logical or scientific counter-example, without addressing the possibility of interpreting the idiom as a normative statement (meaning something such as it's not fair to judge apples and oranges by the same criteria).

Law professor Eugene Volokh argues that the idiom is inappropriate, because "we compare apples and oranges all the time! We compare them by price, by how much we like the taste, by likely sweetness and ripeness, by how well they'll go in a tasty fruit cocktail, and so on. In fact, every time we go to the store and buy apples rather than oranges, or vice versa, we are necessarily (if implicitly) comparing apples and oranges". He suggested that a better idiom would involve "two items that really are radically dissimilar" like "apples and democracy" or "oranges and the multiplication table". He believes that such "comparisons really would be hard to conduct". One of Volokh's readers noted that even such radically dissimilar nouns as apples and the multiplication table can be compared fairly easily, as when one compares the number of syllables in each word or the relative age at which children learn each concept; another reader noted that the idiom was still relevant in situations where someone criticized oranges for not being good apples.[2] Alexander "Sasha" Volokh argued that mathematically, only the properties of apples and oranges can be compared; the fruits themselves cannot be. Mathematically astute bloggers and readers forced him to partially retract his analysis, however.[3] Also, in his blog, Volokh admitted that his argument "was a joke".[4] 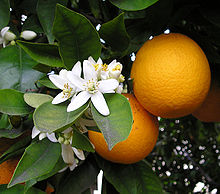 At least two tongue-in-cheek scientific studies have been conducted on the subject, each of which concluded that apples can be compared with oranges fairly easily and on a low budget and the two fruits are quite similar. The first study, conducted by Scott A. Sandford of the NASA Ames Research Center, used spectrometry to analyze both apples and oranges. The study, which was published in the Annals of Improbable Research, concluded: "[...] the comparing apples and oranges defense should no longer be considered valid. This is a somewhat startling revelation. It can be anticipated to have a dramatic effect on the strategies used in arguments and discussions in the future."[5]

A second study, written by Stamford Hospital's surgeon-in-chief James Barone and published in the British Medical Journal, noted that the phrase apples and oranges was appearing with increasing frequency in the medical literature, with some notable articles comparing "Desflurane and propofol" and "Salmeterol and ipratropium" with "apples and oranges". The study also found that both apples and oranges were sweet, similar in size, weight, and shape, that both are grown in orchards, and both may be eaten, juiced, and so on. The only significant differences found were in terms of seeds (the study used seedless oranges), the involvement of Johnny Appleseed, and color.[6]

The Annals rejoined that its "earlier investigation was done with more depth, more rigour, and, most importantly, more expensive equipment" than the British Medical Journal study.[6]

Apples and oranges in teaching the use of units

A teacher decides between apples and oranges for a school play.

The admonition is really more of a mnemonic, since in general counts of objects have no intrinsic unit and, for example, a number count of apples may be dimensionless or have dimension fruit; in either of these two cases, apples and oranges may indeed be added.

Oranges as a type of apple

In many languages, oranges are, implicitly or explicitly, referred to as a type of apple, specifically a golden apple or a Chinese apple. For example, the Greek χρυσόμηλον (chrysomelon) and Latin pomum aurantium both literally describe oranges as golden apples. In other languages like German, Finnish, Polish, or Russian the terms for the bitter orange (a related species) are derived from Latin pomum aurantium. Additionally, the Hebrew word תפוז (tapuz) is a shortened form of תפוח זהב (tapuakh zahav), or golden apple.