Things to Do in Denver When You're Dead

Things to Do in Denver When You're Dead

Infobox Film
name = Things to Do in Denver When You're Dead 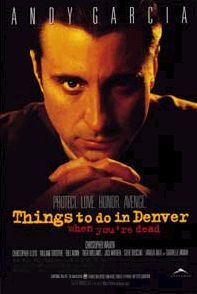 "Things to Do in Denver When You're Dead" is a movie directed by and written by . Starring , , , and .

The film's title comes from a song of the same name.

The lead character's name, "Jimmy the Saint," comes from the song "Lost in the Flood" off the album ""

Narrated by local "Moustache Pete" mob associate Joe Heff, Things To Do in Denver When You're Dead, is the story of Jimmy "The Saint" Tosnia (Andy Garcia), a dapper ex-gangster living in Denver. Once known as "the bitchest bastard" in Denver's crime scene, Jimmy has left the criminal world and has attempted to "go straight" with his business "Afterlife Advice" where dying people videotape messages for loved ones. Jimmy's business isn't doing well and he is in debt to a local loan shark known as "New Orleans Sal." What Jimmy doesn't know is that his former boss, the local crime lord known as "The Man With the Plan" (played by Walken) has bought up his debt in order to command a favor from him. In exchange for forgiving Jimmy's debt, The Man With The Plan wants Jimmy to lead a crew on one last job. The Man With The Plan was rendered a some years ago in the wake of a failed attempt on his life. Left bitter and immobilized, The Man With The Plan is interested in helping his dim witted emotionally challenged son, Bernard. Bernard is still in love with an ex-girlfriend, but the woman has moved on to another boyfriend, an orthodontist. The Man With The Plan believes that Bernard will be able to resume a relationship with this woman if her new boyfriend was out of the picture. He wants Jimmy to lead a crew in scaring off the man. They are to beat him up so that he dumps Bernard's ex. Initially reluctant, Jimmy takes the job when The Man With The Plan bribes him and threatens him.

Jimmy puts together a team made up of several old acquaintances from his criminal days, many of whom have also tried to leave the criminal life, with generally less than satisfying results. This team includes Franchise, a grizzled biker, Easy Wind, an easy going , and Pieces, who has an unidentified disease which causes his digits to fall off. The last member of the team is Critical Bill, an emotionally unstable psychopath who Jimmy finds employed in a mortuary where he uses corpses as punching bags in order to "keep my powder dry."

The plan is to have Pieces and Critical Bill pose as Denver police officers. They will pull their target over on the highway and, under the pretext of some sort of traffic violation, take him to a waiting trailer where Jimmy and Franchise will administer a beating. The plan begins to go wrong when their target turns out to be more observant and spirited than anticipated. He immediately becomes suspicious of Pieces and Bill's identity as police officers and begins to ridicule them. This enrages Critical Bill, who pulls out a knife and stabs the man in the throat. At this point the commotion rouses Bernard's ex-girlfriend, who had been sleeping in the back of the target's van. She comes out and screams when she sees her boyfriend's dead body. Startled, Pieces shoots her dead.

The group realizes that they are in a terrible spot. What was supposed to have been a simple beating has ended up with them having two dead bodies on their hands, one of them someone looked on fondly by The Man With The Plan. They dispose of the bodies and Jimmy goes to see their employer. The Man With The Plan is furious at the outcome of their botched mission. He informs Jimmy that out of consideration for their past relationship he will allow him to live. However, the other members of the team have been sentenced to "buckwheats", in the slang of the film assassination in a particularly gruesome and painful manner.

As the movie progresses, the group must come to terms with their own impending deaths as they are stalked by a mild mannered, yet deadly hit man known as Mr Shhh (Steve Buscemi). Mr Shhh kills most of the team but is himself slain as he takes the life of Critical Bill. The drama of the film is marked by how the men choose to spend their final days from running (Franchise), hiding (Easy Wind), accepting (Pieces), or fighting back (Critical Bill). In the wake of Mr Shhh's death the contract falls to a trio of Mexican brothers, who attempt to track down Jimmy. In his last days Jimmy has sex with a drug addicted prostitute with whom he has long been acquainted, in order to fulfill her wish of having a baby. Leaving a farewell message for his unborn child, Jimmy realizes that the only way he can exact revenge on The Man With The Plan is through his son Bernard. Tracking down Bernard, Jimmy murders him just before he himself is killed, thereby robbing The Man With The Plan of the last bit of meaning in his life.