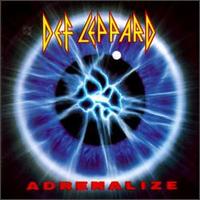 "Adrenalize" is the fifth by British band , released in 1992. The album was the first by the band following the 1991 death of guitarist . It was produced by and , with as executive producer.

At the end of the "" world tour in October 1988, Def Leppard vowed to the press that their next album would not take another four years to be released, and quickly reconvened weeks later to start work. However, 's alcoholism was taking a turn for the worse. Whereas touring had kept him sober onstage, offstage his condition was beginning to affect his work in the studio. In addition, was unavailable to return as producer as he was working with Canadian rocker on "".

The band chose to produce the album themselves. Steve's problems did not help to advance progress and in fact, was starting to set them back. In late 1989, Clark would be found unconscious in a gutter in , Minnesota. He was immediately sent to rehab, and band members (along with Lange) started attending confrontational therapy to attempt to shame him into defeating his addictions. In a desperate move to help their friend, guitar tech Malvin Mortimer would be assigned to keep a 24 hour watch on Clark, according to , it was a difficult task.

None of this would prove to be fruitful, and in August 1990 the band granted Clark a six-month leave of absence. While it was hoped that this break would free him of any stresses, the band seemed resigned to the fact that they could no longer do anything for Clark.

On , was found dead in his home by his girlfriend Janie Dean. The coroner's report revealed that Clark had died of an accidental mix of with and that led to compression of the .

After a short period of uncertainty about the band's future, the remaining members decided to resume work on the album. Former Lange engineer was hired as co-producer, while Lange maintained a minor role via phone calls and demos sent to him.

A search for Clark's replacement was held off until after the completion of the album, and recording sessions progressed quickly in the year that followed. On , "Adrenalize" was released worldwide. While some reviews were favorable ("" magazine awarded it 4 out of 5 stars), many critics attacked the album for being formulaic and too similar to "Hysteria".

Further complicating matters, "Adrenalize" was released during the time when and bands were breaking into the mainstream at the expense of "glam/pop metal" bands. Nonetheless, "Adrenalize" debuted at the number one position in both the UK and the US (quickly going triple platinum there). The album has sold over 7 million copies worldwide. [Album sales - Source BBC News [http://www.bbc.co.uk/dna/h2g2/alabaster/A425828] ] The album was dedicated to the memory of .

Former and guitarist , a longtime friend of the band, was brought in as the newest member in April 1992. He appears in all promotional videos for the album's singles (except "Let's Get Rocked"), despite not playing on the album.

Note: Some CD versions of the album include non-album B-sides as bonus tracks.

* – the voice
* – all guitars except on "Tonight", Cockney rhyming on "Make Love Like a Man"
* – Hamer 5-string, acoustic guitar on "Tonight"
*Rick Allen – skins