Internal force lines are denser near the hole, a common stress concentration

In materials science, the strength of a material is its ability to withstand an applied stress without failure. The applied stress may be tensile, compressive, or shear. Strength of materials is a subject which deals with loads, deformations and the forces acting on a material. A load applied to a mechanical member will induce internal forces within the member called stresses. The stresses acting on the material cause deformation of the material. Deformation of the material is called strain, while the intensity of the internal forces is called stress. The strength of any material relies on three different type of analytical method: strength, stiffness and stability, where strength refers to the load carrying capacity, stiffness refers to the deformation or elongation, and stability refers to the ability to maintain its initial configuration. Material yield strength refers to the point on the engineering stress-strain curve (as opposed to true stress-strain curve) beyond which the material experiences deformations that will not be completely reversed upon removal of the loading. The ultimate strength refers to the point on the engineering stress-strain curve corresponding to the stress that produces fracture.

A material's strength is dependent on its microstructure. The engineering processes to which a material is subjected can alter this microstructure. The variety of strengthening mechanisms that alter the strength of a material includes work hardening, solid solution strengthening, precipitation hardening and grain boundary strengthening and can be quantitatively and qualitatively explained. Strengthening mechanisms are accompanied by the caveat that some mechanical properties of the material may degenerate in an attempt to make the material stronger. For example, in grain boundary strengthening, although yield strength is maximized with decreasing grain size, ultimately, very small grain sizes make the material brittle. In general, the yield strength of a material is an adequate indicator of the material's mechanical strength. Considered in tandem with the fact that the yield strength is the parameter that predicts plastic deformation in the material, one can make informed decisions on how to increase the strength of a material depending its microstructural properties and the desired end effect. Strength is expressed in terms of compressive strength, tensile strength, and shear strength, namely the limit states of compressive stress, tensile stress and shear stress, respectively. The effects of dynamic loading are probably the most important practical consideration of the strength of materials, especially the problem of fatigue. Repeated loading often initiates brittle cracks, which grow until failure occurs. The cracks always start at stress concentrations, especially changes in cross-section of the product, near holes and corners.

The study of the subject of strength of materials often refers to various methods of calculating stresses in structural members, such as beams, columns and shafts. The methods employed to predict the response of a structure under loading and its susceptibility to various failure modes may take into account various properties of the materials other than material (yield or ultimate) strength. For example failure in buckling is dependent on material stiffness (Young's Modulus).

A material being loaded in a) compression, b) tension, c) shear.

Uniaxial stress is expressed by

where F is the force [N] acting on an area A [m2].[3] The area can be the undeformed area or the deformed area, depending on whether engineering stress or true stress is of interest. 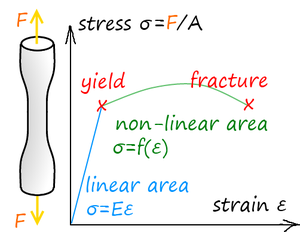 Basic static response of a specimen under tension

Consider the difference between a carrot and chewed bubble gum. The carrot will stretch very little before breaking. The chewed bubble gum, on the other hand, will plastically deform enormously before finally breaking.

Ultimate strength is an attribute related to a material, rather than just a specific specimen made of the material, and as such it is quoted as the force per unit of cross section area (N/m²). The ultimate strength is the maximum stress that a material can withstand before it breaks or weakens.[12] For example, the ultimate tensile strength (UTS) of AISI 1018 Steel is 440 MN/m². In general, the SI unit of stress is the pascal, where 1 Pa = 1 N/m². In Imperial units, the unit of stress is given as lbf/in² or pounds-force per square inch. This unit is often abbreviated as psi. One thousand psi is abbreviated ksi.

A Factor of safety is a design criteria that an engineered component or structure must achieve. FS = UTS / R, where FS: the factor of safety, R: The applied stress, and UTS: ultimate stress (psi or N/m^2) [13]

Margin of Safety is also sometimes used to as design criteria. It is defined MS = Failure Load/(Factor of Safety * Predicted Load) - 1

Design stresses that have been determined from the ultimate or yield point values of the materials give safe and reliable results only for the case of static loading. Many machine parts fail when subjected to a non steady and continuously varying loads even though the developed stresses are below the yield point. Such failures are called fatigue failure. The failure is by a fracture that appears to be brittle with little or no visible evidence of yielding. However, when the stress is kept below "fatigue stress" or "endurance limit stress", the part will endure indefinitely. A purely reversing or cyclic stress is one that alternates between equal positive and negative peak stresses during each cycle of operation. In a purely cyclic stress, the average stress is zero. When a part is subjected to a cyclic stress, also known as stress range (Sr), it has been observed that the failure of the part occurs after a number of stress reversals (N) even if the magnitude of the stress range is below the material’s yield strength. Generally, higher the range stress, the fewer the number of reversals needed for failure.

Out of the four theories, only the maximum normal stress theory predicts failure for brittle materials. The rest of the three theories are applicable for ductile materials. Out of these three, the distortion energy theory provides most accurate results in majority of the stress conditions.The strain energy theory needs the value of Poisson’s ratio of the part material, which is often not readily available. The maximum shear stress theory is conservative. For simple unidirectional normal stresses all theories are equivalent, which means all theories will give the same result.