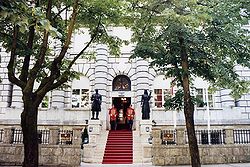 Cetinje (Serbo-Croatian pronunciation: [ʦě̞tiɲe̞]; Montenegrin: Цетинѣ / Cetině (archaic), Цетиње / Cetinje (modern), Italian: Cettigne, Greek: Κετίγνη, Ketígni, Turkish: Çetince) is a town and Old Royal Capital of Montenegro. It is also a historical and the secondary capital of Montenegro (Приjестоница / Prijestonica), with the official residence of the President of Montenegro. It had a population of 13,991 as of 2011.

It is the centre of municipality (population 16,757 in 2011). The city nestles on a small karst plain surrounded by limestone mountains, including Mt. Lovćen, the Black Mountain from which Montenegro gets its name.

Cetinje is a town of immense historical heritage, founded in the 15th century. It became the center of Montenegrin life and both a cradle of Montenegrin and an Serbian Orthodox religious center. It is because of its heritage as a long-term Montenegrin capital that it is today the honorary capital of Montenegro.

The founding of Cetinje was conditioned by the historical, political, and economic background in the 15th century. Wars of conquest led by the Turks forced Ivan Crnojević, the ruler of Zeta at that time, to move the capital of his country from the fortified town of Žabljak to the inaccessible parts, to Obod in 1475, and soon after it at the foot of Mt. Lovćen. In the field of Cetinje in 1482 his court was built and two years later the monastery was built as well. By building the court and the monastery a new capital was founded. Its name was Cetinje. It was named after the River Cetina that runs through it. The new monastery became the domicile of the Zeta metropolitan. So, Cetinje turned out to be not only the center of secular life but also the spiritual center where Đurađ Crnojević, the son to Ivan Crnojević, founded the first printing house in the Slavic South.

Rapid progress of Cetinje under the rule of the Crnojević dynasty was interrupted at the very end of the 15th century. Actually, Zeta lost its independence in 1499 so the only free part of the country, which was called Montenegro since then, was reduced to a mountainous territory between Crnojević River and The Bay of Kotor.

In the next two centuries Cetinje stagnated in its development. It was very often under the attack of Venice and the Turks. So, in the 16th and 17th century Cetinje was exposed to tough temptations. In this period the court and the monastery of the Crnojevići dynasty were destroyed. It was only by the end of the 17th century, in 1697, that Cetinje began to flourish again under the rule of the Petrović dynasty and Danilo Petrović as its founder.

Leading the liberation wars and strengthening the unity in the country preoccupied Danilo and his successors. They didn’t have enough time to dedicate to the building of Cetinje. It was only during the rule of Petar II Petrović Njegoš that the remarkable progress has been made. In 1838 his new royal residence called Biljarda (Billiard house) was built. Cetinje was enlarged by building new houses that gradually led to urbanization.

Montenegrin independence was recognized by the decision of the Berlin Congress (1878) and so Cetinje became the capital of a European country.

Many modern buildings designed for foreign consulates were built due to the newly established relations with various European countries. The buildings of the French, Russian, British, Italian and Austro-Hungarian consulates are regarded as the most beautiful of these.

Cetinje made great progress under the rule of Prince Nikola I Petrović when numerous public edifices were built. Those include the first hotel, called ‘Lokanda’, then the new Prince’s palace, the Girls’ Institute and the hospital. This period also saw the first tenancy houses. In the 1860 report Cetinja had 34 households.

Montenegro was proclaimed a kingdom in 1910. This had a great effect on its development. At this time the Government House, the symbol of state power, was built. The population census from the same year recorded a massive growth in the world's smallest capital, registering 5,895 inhabitants.

Between 1878 and 1914 Cetinje flourished in every sense. Many renowned intellectuals from other South-Slavic parts came to stay there and made a contribution to the cultural, educational and every other aspect of life.

At the time between the two World Wars, Cetinje expanded its territory, as it was now a centre of the Zeta region. But when it was decided by the Parliament of Montenegro that the administrative organs should be located in Titograd (previously and presently Podgorica), Cetinje went through a harsh crisis. By building certain industrial sections and at the same time neglecting the development of the city's traditional and potential cultural and tourist capacities, the chance to create a strong basis for more solid prosperity was lost.

Settlements with biggest number of inhabitants in Cetinje Municipality are (last census, 2003): 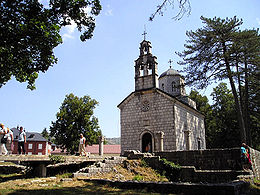 Cetinje was neglected as a tourist destination for a long time after the end of World War II. Instead, it was developed as an industrial center, with footwear and white goods factories (which eventually closed down with the collapse of the socialist economy).

Cetinje has numerous points of interest, among which are Cetinje Monastery, Vlaška church (built in 1450, with its fence made out of barrels of captured enemy rifles), Biljarda, numerous museums, Zetski dom royal theatre and historic foreign embassies. Many of the old embassies and other administrative buildings are now schools of various kinds, and the town has many young people. 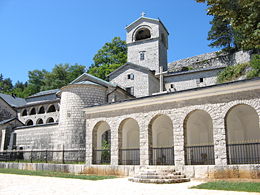 In the near of Cetinje is the Lipska pecina, according to several sources one of the biggest caves in the former Yugoslavia. It starts in the village Lipa and end in the mountains directly over the Adriatic Sea. The cave was open for tourists with a guide till 1967, since then only for organised private visits.

Cetinje is accessible from Budva on the coast, or up the steep road from Kotor. 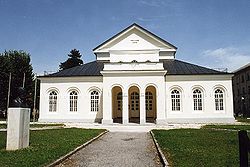 Cetinje has been the cultural and educational centre of Montenegro for five centuries. There are five republic institutions: Đurđe Crnojević Central National Library, the National Museum of Montenegro, the Archives of Montenegro, the Republic Institute for Preserving Cultural Heritage and the Zetski Dom Montenegrin Royal National Theatre. All these institutions keep, process, and provide public access to enormous literary treasure, and protect both mobile and immobile cultural monuments throughout Montenegro. The oldest - and for a long time the most important - cultural institution in the town is the monastery of Cetinje.

Cetinje has a rich publishing and printing tradition. The Printing House of Crnojevići (1492–1496) and the books published there are of great importance for Montenegrin culture and history as well as for the culture of other Orthodox Balkan peoples. Its greatest contribution refers to spreading Cyrillic type. Thus, it represents an important link in a chain of world culture. There were a number of printing houses that continued this great printing tradition. These are: Njegoš Printing House, which operated between 1833 and 1839 and the State Printing House which was founded in 1858. It was renamed in 1952. Since then it has been known as Obod.

Since their foundation to the present day, Cetinje printing houses have published over 3,000 books, a major contribution to the Montenegrin cultural heritage. The first Montenegrin literary and scientific annual, Grlica (Turtledove), was published in 1835, while the first Montenegrin newspaper, ‘The Montenegrin’, was established in 1871. Since then, sixty different newspapers and over thirty magazines have been published. In 1914, as a town of fewer than 6,000 inhabitants, Cetinje supported six different daily newspapers.

The oldest libraries of Montenegro, where the oldest books and documentation of great value are preserved, are located at Cetinje. This makes Cetinje internationally recognized as well. The oldest library among these is the Library of Cetinje Monastery, which was founded by the end of the 15th century at the time when the Printing House of Crnojevići started operating. Today, seventy-five old manuscripts written in Cyrillic, then four incunabula, and many old liturgical books are kept there.

The first public reading room in Montenegro known as The Reading Room of Cetinje was founded in 1896. Since its founding it has been the cultural centre of Montenegro. The fruitful activity of this reading room was continued by the Town Library and the Njegoš reading room, which offers over 63,000 books and volumes of periodicals. 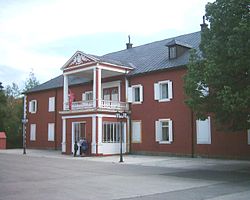 National Museum of Montenegro
(Former Palace of King Nikola I)

Museums in Cetinje include:

All these except the Museum of the Cetinje Monastery and Electric Industry Museum are integrated in one institution called the National Museum of Montenegro. Numerous museums and the huge fund of museum items that are kept there established Cetinje's reputation as a museum town.

Cetinje has always been a cultural centre. Every second year the international art exhibition called Cetinje Biennial is held there. Its founder is Prince Nikola Petrović, great-grandson to King Nikola I.

The most popular sports in Cetinje are football, handball and basketball.

The best results in the past were achieved before WW2, when they won few Montenegrin Championships, and in 1956 in qualifications for the first national league. In 1947,“Lovćen” was juvenile club champion. FK Lovćen now competes in the First Montenegrin League.

Another club from Cetinje is FK Cetinje, formed in 1975.

Handball club “Lovćen” was founded at the beginning of 1949. The best results were achieved at the end of 90s and at the start of 21st century, when it won three Championships of Federal Republic Yugoslavia. For two seasons, HC “Lovćen” was participant of EHF Champions league and once they played in quarterfinals. Today, “Lovćen” competes in the first league and for years is the best Montenegrin handball club.

Basketball club “Lovćen” is one of the oldest sport clubs in Cetinje. It was founded in 1947. The best results were achieved in 1997/98 season, when it was scored at the 6th place of the National basketball league. This provided participation at international competition “Radivoje Korac Cup.” Today, it competes in the first A league of Montenegro. Second club is BC Cetinje, formed in 1997.

During the past, in Cetinje existed Volleyball club "Lovćen". It competed in Republic League and was among best Montenegrin clubs in that sport. VC "Lovćen" is not active anymore.

Cetinje is connected to Podgorica and Budva through three-lane motorways. Both towns are about 30 km (19 mi) away from Cetinje. Another road to Podgorica is built on the coast of Skadar lake.

There is also a historic old road from Cetinje to Kotor, which is not of premium quality, but offers stunning views of the Bay of Kotor.

Previously there was a railway line from Cetinje to Bar along the banks of Skadar Lake, which transported both passengers and cargo. There are no remains of this railway line.

Tivat Airport is 50 km (31 mi) away, and there are regular flights to Belgrade and Zurich, and dozens of charter planes land daily at Tivat airport during the summer season.

Podgorica Airport is 55 km (34 mi) away, and it has regular flights to major European destinations throughout the year.

Other administrative bodies are Management of public revenue, Directorate for Property, Directorate of Investment and Development and Center for Information System. 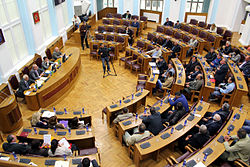 Local parliament is made up of 33 deputies, or odbornici (envoy) in Montenegrin. It is elected by universal ballot and is presided over by a speaker called the Predsjednik Skupštine (President of Parliament).

After the last elections in October 2010, main seats in Skupština have Democratic Party of Socialists of Montenegro. Except them, there are deputies from two other parties and one local coalition.

Democratic Party of Socialists of Montenegro (21)

There are two city settlements in the Old Royal Capital - Cetinje and Rijeka Crnojevića.

Old Royal Capital Cetinje is divided into 23 local community bodies (mjesne zajednice) in which the citizens participate in decisions on matters of relevance to the local community.

Territory of Old Royal Capital Cetinje is divided into 94 settlements.

Cetinje is twinned with:

1 Note: Sparta was an Ancient Greek city famous for its martial prowess and skill, resistance against Persian invaders.