Cass Elliot (September 19, 1941 – July 29, 1974), born Ellen Naomi Cohen and also known as Mama Cass, was an American singer and member of The Mamas & the Papas. After the group broke up, she released five solo albums. Elliot was found dead in her room in London, England, from an apparent heart attack after two weeks of sold-out performances at the Palladium. In 1998, Elliot, John Phillips, Denny Doherty, and Michelle Phillips were inducted into the Rock and Roll Hall of Fame for their work as The Mamas & the Papas.[1]

Ellen Cohen was born to Philip and Bess Cohen in Baltimore, Maryland, where she grew up. The family then moved to Alexandria, Virginia (a suburb of Washington, D.C.). She adopted the name "Cass" in high school – possibly, as Denny Doherty tells it, borrowing it from the actress Peggy Cass – but in any case, it was "Cass", not "Cassandra". She assumed the surname Elliot sometime later, in memory of a friend who had died.

While still attending George Washington High School, she became interested in acting and was cast in a school production of the play The Boy Friend. She left high school shortly before graduation and relocated to New York City to further her acting career, and toured in the musical The Music Man, but lost the part of Miss Marmelstein in I Can Get It for You Wholesale to Barbra Streisand in 1962. 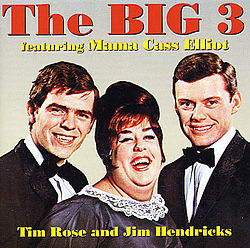 While working as a cloakroom attendant at The Showplace in Greenwich Village, Elliot would sometimes sing, but it wasn't until she returned to the Washington area, to attend American University, that she began to pursue a singing career. As America's folk music scene was on the rise, Elliot met banjoist and singer Tim Rose and singer John Brown, and the three began performing as The Triumvirate. In 1963, James Hendricks replaced Brown and the trio was renamed The Big Three. Elliot's first recording with The Big Three was Winkin', Blinkin' and Nod, was released by FM Records in 1963.

When Tim Rose left The Big Three in 1964, Elliot and Hendricks teamed with Canadians Zal Yanovsky and Denny Doherty as The Mugwumps. This group lasted eight months, after which Cass performed as a solo act for a while. Yanovsky joined with John Sebastian to co-found The Lovin' Spoonful while Doherty joined The New Journeymen, a group that also included John Phillips and his wife, Michelle. In 1965, Doherty convinced Phillips that Cass should join the group. She did so while she and the group members were vacationing in the Virgin Islands.

A popular legend about Elliot is that her vocal range was improved by three notes after she was hit on the head by some copper tubing shortly before joining The New Journeymen in the Virgin Islands. Elliot herself confirmed the story in a 1968 interview with Rolling Stone magazine, saying,

However, friends later said that the pipe story was a less embarrassing explanation for why John Phillips had kept her out of the group for so long, the real reason being, he considered her too fat.[3]

The Mamas and the Papas

With two female members, The New Journeymen needed a new name. According to Doherty, Elliot had the inspiration for the band's new name, as Doherty writes on his website:

Doherty also says that the occasion marked the beginning of his affair with Michelle Phillips. Elliot, who was in love with Doherty, was displeased when he told her of the affair. Doherty has said that she once proposed to him, but that he was so stoned at the time, he could not even respond.

Elliot, known for her sense of humor and optimism, was considered by some to be the most charismatic member of the group. Her powerful, distinctive voice was a large factor in their success. She is best remembered for her vocals on the group's hits "California Dreamin'", "Monday Monday", and "Words of Love", and particularly for the solo "Dream a Little Dream of Me", which the group recorded in 1968 after learning about the death of Fabian Andre, one of the men who co-wrote it, whom Michelle Phillips had met years earlier. Elliot's version is noteworthy for its contemplative pace, whereas almost all earlier recordings of "Dream a Little Dream of Me" (including one by Nat King Cole) had been up-tempo versions — the song having actually been written in 1931 as a dance tune for the nightclubs of the day.

Elliot was also something of a sex symbol for the hippy culture, appearing nude and semi-covered in daisies for a Cheetah magazine poster. Also, Michelle Phillips and John Phillips remember several instances of audience members screaming out their love and throwing their room keys to Cass.

The Mamas & the Papas continued to record to meet the terms of their record contract until their final album was released in 1971.

After the breakup of The Mamas & the Papas, Elliot embarked on a solo singing career. Her most successful recording during this period was 1968's Dream a Little Dream of Me from her solo album of the same name, released by Dunhill Records though it had originally been released on the album The Papas & the Mamas Presented By The Mamas and the Papas earlier that year. She headlined briefly in Las Vegas at Caesars Palace for $40,000 per week, but her performances were not well reviewed.

Elliot had two television variety specials: The Mama Cass Television Show (ABC, 1969) and Don't Call Me Mama Anymore (CBS, 1973). She was a regular guest on TV talk shows and variety shows in the 1970s, including The Julie Andrews Hour, The Mike Douglas Show, The Andy Williams Show, Hollywood Squares, "The Johnny Cash Show" and The Carol Burnett Show and was a guest panelist for a week on the game show Match Game '73. She guest-hosted for Johnny Carson on The Tonight Show and appeared on that show 13 other times. She also appeared on and co-hosted The Music Scene on ABC and was featured on the first The Midnight Special on NBC. She performed in Saga of Sonora, a 1973 TV music-comedy-western special with Jill St. John, Vince Edwards, Zero Mostel, and Lesley Ann Warren. She also sang the jingle "Hurry on down to Hardee's, where the burgers are charco-broiled" for Hardee's fast-food advertisements.

Throughout the early 1970s, Elliot continued her acting career as well. She had a featured role in the 1970 movie Pufnstuf and made guest appearances on TV's The New Scooby-Doo Movies, Young Dr. Kildare, Love, American Style, and The Red Skelton Show, among others.

Elliot was married twice, the first time in 1963 to James Hendricks, her groupmate in The Big Three and The Mugwumps. This was reportedly a platonic arrangement to assist him in avoiding being drafted into the army during the Vietnam War;[5] the marriage reportedly was never consummated and was annulled in 1968.[6] In 1971, Elliot married journalist Baron Donald von Wiedenman[7][8] who was heir to a Bavarian barony. Their marriage ended in divorce after a few months.

Elliot gave birth to a daughter, Owen Vanessa Elliot, on April 26, 1967. She never publicly identified the father, but many years later, Michelle Phillips helped Owen locate her biological father.[9] Owen grew up to become a singer as well and toured with former Beach Boy Al Jardine.[10]

At the height of her solo career in 1974, Elliot performed two weeks of sold-out concerts at the London Palladium. She telephoned Michelle Phillips after the final concert on July 28, elated that she had received standing ovations each night. She then retired for the evening, and died in her sleep at age 32. Sources state her death was due to a heart attack.[11][12] Elliot died in a London flat, No. 12 at 9 Curzon Place, Shepherd Market, Mayfair which was on loan from singer/songwriter Harry Nilsson. Four years later, The Who's drummer Keith Moon died in the same flat at the same age.[13]

Elliot was entombed in Mount Sinai Memorial Park Cemetery in Los Angeles. After her death, Elliot's younger sister, Leah Kunkel, received custody of Cass' daughter Owen, then just seven years old. Kunkel is also a singer and charted in 1984 as a member of the Coyote Sisters on the single "Straight From The Heart (Into Your Life)". Kunkel was interviewed by VH1 in 1997 and discussed her sister for the "Mamas & Papas" episode of the network's documentary series Behind The Music.

An oft-repeated urban myth states that Elliot choked to death on a ham sandwich.[14] The story, which started following the discovery of her body, was based on speculation in the initial media coverage. Police had told reporters that a partially eaten sandwich found in her room might have been to blame, though an autopsy had yet to be conducted. Despite the post-mortem examination finding that Elliot had died of a heart attack and no food at all was found in her windpipe,[12] the false story that she choked on a sandwich has persisted in the decades following her death.

The song "Mama, I Remember You Now" by the Swedish artist Marit Bergman is a tribute to Elliot. She was the subject of a 2004 stage production in Dublin,[15] The Songs of Mama Cass, with Kristin Kapelli performing main vocals. The Crosby, Stills & Nash Greatest Hits album released in 2005 was dedicated to Cass Elliot. The British film Beautiful Thing heavily features her recordings, and the memory of her plays a role in the life of one character.

Anthony Kiedis of Red Hot Chili Peppers cited The Mamas & the Papas, and especially Elliot as an influence, in an interview for Rolling Stone, saying, "There have been times when I've been very down and out in my life, and the sound of her voice has sort of given me a reason to want to carry on."[16] Boy George and k.d. lang also cited Elliot as an influence.[17] George described her as "the greatest white female singer ever".[18] Beth Ditto, singer of the band Gossip, named Elliot both as music and fashion inspiration, saying, "I really wanted to sound like Mama Cass growing up."[19][20]

Elliot's recording of "Make Your Own Kind of Music" is featured prominently in several episodes of seasons 2 and 3 of Lost. Her recording of "It's Getting Better" was also featured in a season 4 episode.

Elliot is mentioned as one of the upcoming concert acts in the Stephen King short story "You Know They Got a Hell of a Band", which concerns a couple who wander into a small town inhabited by dead rock and roll legends.

Since her death, Elliot and the circumstances surrounding her death have been the butt of numerous jokes in comedy routines, movies, and songs, by performers such as Frank Zappa, Adam Sandler,[21] Denis Leary, Mike Myers (in the first Austin Powers movie), "Weird Al" Yankovic, Robin Williams, and others.

Industrial musician Foetus mentions that he is the one that "gave the sandwich to Mama Cass" in the song Throne Of Agony.[22]

The Mamas and the Papas

Collaborations
Dave Mason & Cass Elliot
Compilations
Mama's Big Ones
Live
Don't Call Me Mama Anymore
Singles
"Dream a Little Dream of Me" · "California Earthquake" · "Move in a Little Closer, Baby" · "It's Getting Better" · "Make Your Own Kind of Music" · "New World Coming" · "A Song That Never Comes" · "The Good Times Are Coming" · "Don't Let the Good Life Pass You By"
Related Articles
The Mamas & the Papas
Categories: