Samuel Augustus Nunn, Jr. (born September 8, 1938) is an American lawyer and politician. Currently the co-chairman and Chief Executive Officer of the Nuclear Threat Initiative (NTI), a charitable organization working to reduce the global threats from nuclear, biological and chemical weapons, Nunn served for 24 years as a United States Senator from Georgia (1972 until 1997) as a member of the Democratic Party. His political experience and credentials on national defense reportedly put him into consideration as a potential running mate for Democratic presidential candidates John Kerry (2004) and Barack Obama (2008).[1] Nunn is an informal advisor to President Obama.

Nunn was born in Macon, Georgia and raised in nearby Perry, and he grew up with family connection to politics; he was a grandnephew of the Congressman Carl Vinson.

Nunn is an Eagle Scout and recipient of the Distinguished Eagle Scout Award from the Boy Scouts of America.[2][3] In high school, Nunn was a standout athlete, captaining the school's basketball team to a state championship.[4]

Nunn attended Georgia Tech in 1956,[5] where he was initiated as a brother of Phi Delta Theta. He transferred to Emory University the next year and received his undergraduate degree in 1960.[5] He then received a degree from the Emory University School of Law in 1962.[5] After active duty service in the United States Coast Guard, he served six years in the U.S. Coast Guard Reserve and served for a short time as a Congressional staffer.

Nunn returned to Perry to practice law and manage the family farm. Later, Nunn would serve as the president of the Perry Chamber of Commerce.

In 1989, it was reported that Nunn had a drunk driving accident in 1964. This report occurred during the hearings of ex-Senator John Tower to be confirmed for United States Secretary of Defense. Nunn was opposing Tower due to Tower's alleged drinking problems.[6]

Nunn first entered politics as a member of the Georgia House of Representatives in 1968.[5] He was elected to the United States Senate in 1972, defeating appointed U.S. Senator David H. Gambrell in the Democratic primary and U.S. Rep. Fletcher Thompson in the general election. Nunn retired from the Senate in 1997, offering a lack of "zest and enthusiasm" as justification, though analysts have offered the Democratic party's perceived shift to the left as a major factor.[7]

During his tenure in the U.S. Senate, Nunn served as chairman of the powerful U.S. Senate Committee on Armed Services and the Permanent Subcommittee on Investigations. He also served on the Intelligence and Small Business Committees. His legislative achievements include the landmark Department of Defense Reorganization Act, drafted with the late Senator Barry Goldwater, and the Nunn-Lugar Cooperative Threat Reduction Program,[2] which provides assistance to Russia and the former Soviet republics for securing and destroying their excess nuclear, biological and chemical weapons. To date, the Nunn-Lugar Cooperative Threat Reduction program has deactivated more than 5,900 nuclear warheads. He was supposedly a top choice to be Secretary of Defense or State in 1992 and 1996 and in a prospective Gore cabinet in 2000.

Overall, Nunn was a moderate-to-conservative Democrat[8] who often broke with his party on a host of social and economic issues. He strongly opposed the budget bill of 1993, which included provisions to raise taxes in order to reduce the budget deficit. Nunn also opposed President Bill Clinton's proposal to allow gays to serve openly in the military.[9][10] In 2008, Nunn endorsed a new Pentagon study to examine the issue of gays serving openly in the military: “I think [when] 15 years go by on any personnel policy, it’s appropriate to take another look at it — see how it’s working, ask the hard questions, hear from the military. Start with a Pentagon study.”[11]

He voted in favor of school prayer, capping punitive damage awards, amending the U.S. Constitution to require a balanced budget, and limiting death penalty appeals. On certain issues like abortion, the environment, gun control, and affirmative action, Nunn took a more liberal line. He consistently voted in favor of increased immigration.[12] One of his most controversial votes was his vote against the Gulf War.[13]

In September 1994, Sam Nunn, former President Jimmy Carter and former Chairman of the Joint Chiefs of Staff Colin Powell were asked by President Bill Clinton to go to Haiti in order to force the departure of the military dictator Lieutenant General Raoul Cédras. In 1994 Clinton publicly demanded that the Haitian government step aside and restore democratic rule. Clinton deployed a large military force to surround the country in September 1994. Just before the troops reached Haiti, Clinton sent a delegation led by Carter, Nunn and Powell to urge Cédras to step down and leave the country. Cédras agreed and surrendered the government, and he and his top lieutenants left the country in October. Just days later, American forces escorted the country’s elected president, Jean-Bertrand Aristide, into the capital. Afterwards, Clinton lavished praise on Nunn's delegation for averting a military strike on the nation. "As all of you know, at my request, President Carter, Gen. Colin Powell, and Sen. Sam Nunn went to Haiti to facilitate the dictators' departure. I have been in constant contact with them for the last two days. They have worked tirelessly, almost around the clock, and I want to thank them for undertaking this crucial mission on behalf of all Americans," Clinton said.[14]

Upon his exit from the Senate, Nunn was the recipient of bipartisan praise from his colleagues. Republican Senator John Warner of Virginia concluded, "Senator Nunn quickly established himself as one of the leading experts in the Congress and, indeed, all of the United States on national security and foreign policy. He gained a reputation in our country and, indeed, worldwide as a global thinker, and that is where I think he will make his greatest contribution in the years to come, wherever he may be, in terms of being a global thinker. His approach to national security issues has been guided by one fundamental criteria: What Sam Nunn believes is in the best interest of the United States of America."[15] 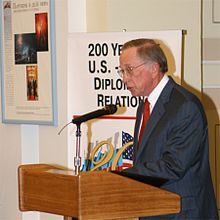 In addition to his work with NTI, Nunn has continued his service in the public policy arena as a distinguished professor in the Sam Nunn School of International Affairs at Georgia Tech. There, he hosts the annual Sam Nunn Policy Forum, a policy meeting that brings together noted academic, government, and private-sector experts on technology, public policy, and international affairs to address issues of immediate importance to the nation.[16]

Additionally, Nunn serves as Chairman of the Board of Trustees for the Center for Strategic and International Studies in Washington, D.C. At CSIS Nunn and former Senator and United States Secretary of Defense William Cohen joined together for a series of public roundtable discussions designed to focus Americans on the seminal issues that the United States must face. The Cohen-Nunn Dialogues featured top thought leaders, public policy experts, prominent journalists, and leading scholars.[17]

Nunn also is a retired partner in the law firm of King & Spalding. He is an Advisory Board member for the Partnership for a Secure America, a not-for-profit organization dedicated to recreating the bipartisan center in American national security and foreign policy.

He is a board member of the following publicly held corporations: Chevron Corporation, the Coca-Cola Company, Dell Computer Corporation, General Electric Company.[18]

Senator Nunn's membership in Augusta National Golf Club became the focus of a campaign by women seeking membership in the exclusive all-male club in 2002. The club had admitted its first African-American member in 1990, but was still closed to women. The Club chose to air the Masters without commercials rather than succumb to the pressure to open admissions to women. [19]

In 2005, Nunn teamed up with former Senator Fred Thompson to promote a new film, Last Best Chance, on the dangers of excess nuclear weapons and materials. The film aired on HBO in October 2005. He gave a full presentation outlining his goals at the Commonwealth Club of California. In the broadcast, subtle comparisons are made between Nunn's career as elder statesman and that of Jimmy Carter, noting that they are both from Georgia and both were farmers before launching their political careers.

Nunn—along with William Perry, Henry Kissinger, and George Shultz -- has called upon governments to embrace the vision of a world free of nuclear weapons, and in three Wall Street Journal opeds proposed an ambitious program of urgent steps to that end. The four have created the Nuclear Security Project to advance this agenda. Nunn reinforced that agenda during a speech at the Harvard Kennedy School on October 21, 2008, saying, "I’m much more concerned about a terrorist without a return address that cannot be deterred than I am about deliberate war between nuclear powers. You can’t deter a group who is willing to commit suicide. We are in a different era. You have to understand the world has changed.[20] In 2010, the four were featured in a documentary film entitled "Nuclear Tipping Point". The film is a visual and historical depiction of the ideas laid forth in the Wall Street Journal op-eds and reinforces their commitment to a world without nuclear weapons and the steps that can be taken to reach that goal.

Sam Nunn is also Member of the Supervisory Council of the International Luxembourg Forum on Preventing Nuclear Catastrophe, a not-for-profit organization uniting leading experts on non-proliferation of nuclear weapons, materials and delivery vehicles. He also serves on the Board of Advisors for the National Bureau of Asian Research, a non-profit, nonpartisan research institution.[21]

Nunn is married to the former Colleen O'Brien and has two children, Michelle and Brian. Nunn met his future wife at the U.S. Embassy in Paris while she was working for the Central Intelligence Agency.[22]

According to the Lee Iacocca book, Talking Straight (1988), Chrysler Corporation came under scrutiny for selling new vehicles which were driven by company executives before the odometers were connected. Iacocca, Chrysler's CEO, didn't think too much of the scandal at the time, until Sam Nunn spoke with him about his own recently purchased Chrysler Fifth Avenue. Within days after meeting with Mr. Nunn in 1987, Iacocca launched a detailed investigation into the claims, and extended warranties - and public apologies - to numerous current Chrysler owners.

Along with Republican Senator Richard Lugar, co-author of the Nunn-Lugar Cooperative Threat Reduction, Nunn's work to "strengthen global security by reducing the risk of use and preventing the spread of nuclear, biological and chemical weapons," has resulted in at least three nominations for the Nobel Peace Prize in 2000, 2002 and 2005.[23][24][25]

In 2004, both men were jointly awarded the Heinz Awards Chairman's Medal for their efforts.[26]

In 2008, Nunn received the Hessian Peace Prize for his commitment on nuclear disarmament and for combating nuclear terrorism.[27]

On August 19, 2007 Nunn said he would not decide on a presidential bid until after the 2008 primary season, when presumptive nominees by both parties would emerge.[28] However, speculation over a Nunn White House bid ended on April 18, 2008, when he endorsed Democratic presidential contender Barack Obama.[29]

Despite having publicly declared his lack of interest in being a candidate for vice president, Nunn continued to be mentioned by some political pundits and politicians as a potential running mate for Obama.[30][31][32]

In an interview published June 4, 2008 by the Guardian, former President Jimmy Carter said that he favored Nunn, a fellow Georgian, as Obama's possible choice for Vice President. Peggy Noonan, a columnist and former Ronald Reagan and George H.W. Bush speechwriter also expressed her support for Nunn.[33]

In an interview with CNBC on August 22, 2008, billionaire investor Warren Buffett said that he favored Nunn as Obama's choice for Vice President.

After Senator Joe Biden was selected as Obama's running mate, speculation began to swirl that Nunn could be a possible Secretary of Defense in an Obama administration, given Nunn and Obama's shared goal of securing loose nuclear weapons.