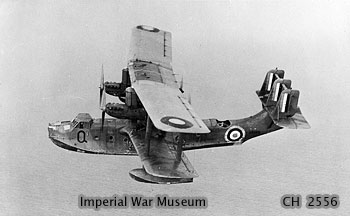 The Short S. 19 Singapore was an English multi-engined built after .

The Singapore name first appeared in the mid-1920s, on a one-off, twin-engined, record-breaking aircraft. The design was developed into two four-engined versions; the prototype Singapore II and production Singapore III. The latter became the 's main long-range maritime patrol flying boat of the 1930s and saw service against the Japanese with the .

The first large all-metal flying boat called a was the Short S.5 Singapore I. This was a biplane design with single fin and rudder, originally powered by two IIIA 650 hp engines. One aircraft was built and first flew at Rochester on , piloted by Shorts' Chief Test Pilot, . The type did not enter production, but was used by Sir for a survey flight around . Registered "G-EBUP", it left Rochester on and arrived at the Cape on , returning to Rochester on the . It was displayed at Olympia in July 1929.

The Short S.12 Singapore II which followed was a development of the Singapore I with 4 engines, mounted in tractor/pusher pairs (). The single example of this aircraft to be built was first flown in 1930, also by John Lankester Parker.

From the Singapore II came a design with 4 engines and triple fins. In 1933 the British ordered 4 flying boats based upon the Singapore II for trials with squadrons under specification R.3/33. These would be followed by a further production order to specification R.14/34. These aircraft, the Short S.19 Singapore III, had all-metal hulls and fabric-covered metal flying surfaces. They were powered by four 675 hp IX mounted between the wings in two tandem push-pull pairs, similar to the Singapore IIs. The crew of 6 was located in a central cabin and fore, aft and midships open gun positions ( or ). A long range fuel tank could be carried externally on the dorsal hull. The first Singapore III flew on 1934. Although obsolescent by the time the first aircraft entered service with in January 1935, the type arrived just in time to benefit from the arms race of the late 1930s and 37 were built. Production terminated in June 1937.

Singapores proved surprisingly tough; after the type was retired by the the "Kiwis" attempted to crush one with a , only to see the dozer drive the length of the lower wing without making an impressionFact|date=February 2007.

was the first squadron equipped with Singapore IIIs. It deployed to in 1935. During 1937 the Singapores of and No. 210 Squadron moved from to as part of an international effort to prevent during the .

Replacement of the Singapore with the was well underway by the outbreak of , however 19 survivors saw limited service in secondary theatres, mainly in a training role. The last RAF unit operating the type was in, appropriately enough, which relinquished its aircraft in October 1941. Four 205 squadron aircraft found their way to in , for use against German raiders. When Japan attacked in December, the aircraft found themselves in the front line. They accounted for a Japanese submarine and conducted several air sea rescues before being replaced by s.

No Singapores are known to have survived.

;Short S.12 Singapore II: A development of the Singapore I powered by 4 engines, single example built.

;Short S.19 Singapore III: A development of the Singapore II powered by 4 Rolls-Royce Kestrel IX engines and equipped with triple fins. 37 were built.