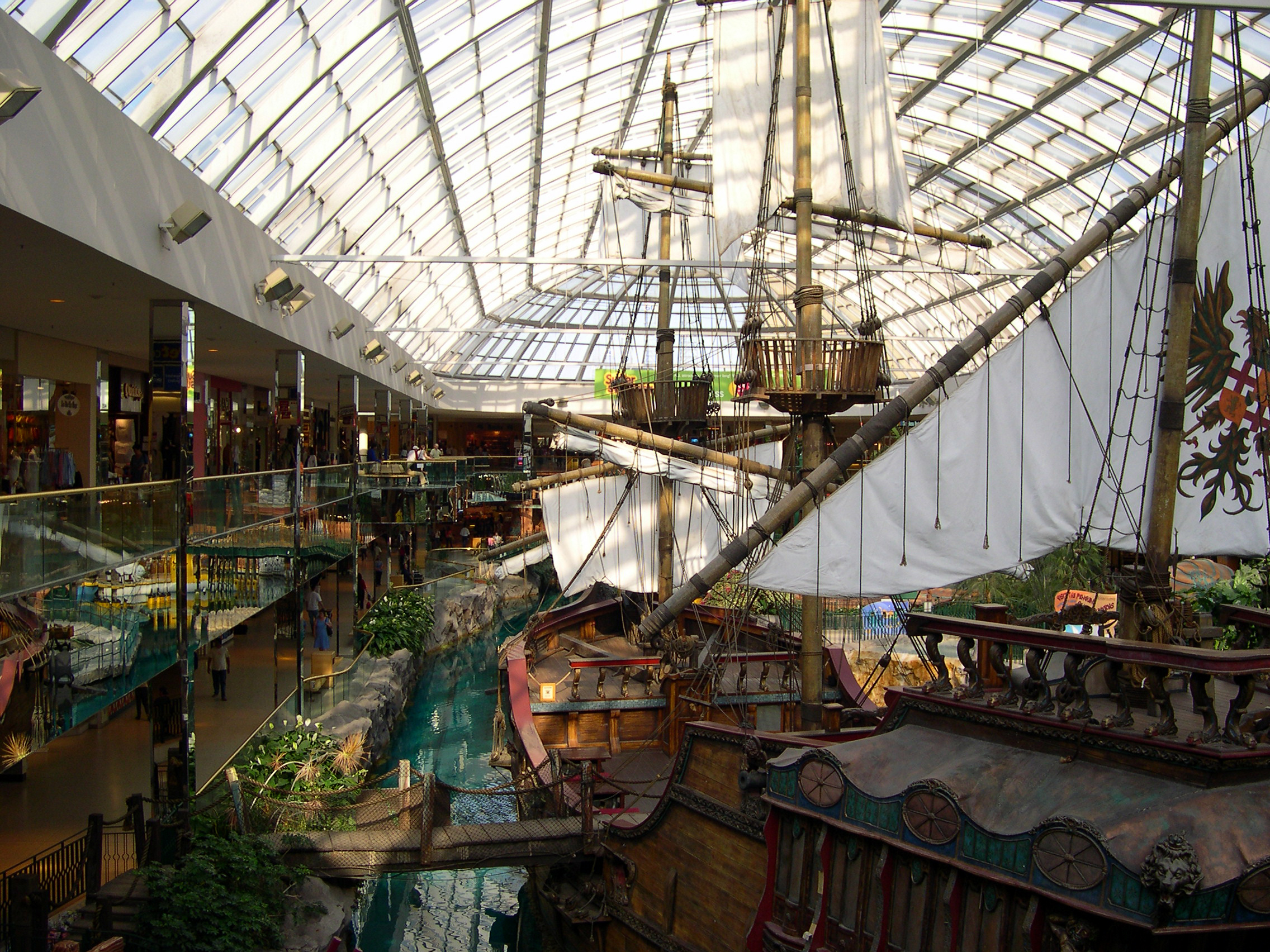 West Edmonton Mall (WEM), located in , , is the largest in and the fourth largest in the world. It was the world's largest mall for a 23 year period from 1981 until 2004.

West Edmonton Mall covers a gross area of about 570,000 m² and cost C$1.2 billion to build. There are over 800 stores and services [Cite web| url= http://www.westedmontonmall.com/about/default.asp| title= About WEM | author= West Edmonton Mall | accessdate= 2007-03-07] and parking for more than 20,000 vehicles. More than 23,000 people are employed at the property. The mall receives 28.2 million visitors per year and between 60,000 and 150,000 shoppers daily depending on the day and season. The mall is currently valued at C$926 million. [The Globe and Mail - [http://www.theglobeandmail.com/servlet/story/LAC.20070126.RCAPITAL26/TPStory/Business West Edmonton Mall] ]

West Edmonton Mall first opened its doors to the public on , . The mall has been expanded three times since its opening in 1981, with these additions completed in 1983 (Phase II), 1985 (Phase III) and 1999 (Phase IV). It was the largest indoor shopping centre in the world until 2004 (History of Shopping Malls) and was put in the . Up until recently, the four phases of construction were used as a guideline for finding stores and attractions. Currently, a colour-coding system is used.

The mall's was originally called Fantasyland, until took the mall to court, claiming ownership of the name, which is used in its theme parks such as . WEM lost and subsequently renamed the attraction . Since the name change, they introduced the mall's mascot Cosmo who is the basis for several rides in Galaxyland. The amusement park is located in what used to be referred to as Phase One, although it stretches into the former Phase II. However, the mall was allowed to retain the name Fantasyland Hotel for its on-site hotel. The hotel is a separate building but it is attached to the former Phase III of the mall.

In the early 1990s, the department store chain, one of WEM's anchors, went bankrupt, and its locations were purchased by the . As a result, WEM boasted two full Bay department stores until the late 1990s when one of the locations was closed, leading to a renovation (then known as Phase IV) that added a Famous Players multiplex, a two-floor HMV location (complete with an HMV stage, which has played hosts to autograph signings for bands, Hollywood celebrities and superstars), a 12.5 million dollar entertainment complex/arcade (now closed), an indoor shooting range, a book store with a , as well as several other smaller stores. In 2005, the upstairs space previously occupied by Playdium was rented by three NewCap Radio radio stations: 790 CFCW, K-97 97.3 (Formerly, 97.3 K-Rock), and 96.3 Capital FM (formerly 96.3 Big Earl). The downstairs area is now partially used as a playing area. In 2007, the Famous Players multiplex, formerly known as Silver City, was renamed Theatre.

The closure in the mid 1990s of (which moved just north of WEM) left a vacancy that sat unfilled until it was converted into a "Chinatown"-themed area in 2002, which includes an , , that takes up the Canadian Tire area.

Throughout the 1990s, the actual store and restaurant count gradually declined to around 600, a result of store expansions, renovations and increasing footprints of today's popular chains. Mall advertising, however, still trumpets the "Over 800 Stores" tagline. Among the exclusive to Edmonton stores are and , along with approximately 10 others.

The mall suffered millions of dollars in damage on , when a severe storm of and caused roofs to fail and drains to overflow. The Ice Palace and surrounding sections were the most damaged, and the saw a overflow. The damage was promptly repaired. The Ice Palace has suffered occasional flood damage since as well.

Gary Hanson, longtime manager of West Edmonton Mall, has agreed to leave Edmonton to become general manager of the new $2-billion US entertainment complex in .

Galaxyland was originally known as Fantasyland, however, during a court battle with Disney, West Edmonton Mall changed the park's name to Galaxyland in July 1995 after completing some minor renovations. It is an indoor amusement park located on the north side of the mall. It is the largest indoor amusement park in the world and features 24 rides and attractions. There are 8 beginner rides, 9 intermediate rides, 7 thrill rides, including the triple loop Mindbender roller coaster, and 5 other "pay at site" rides/games. The Mindbender is the world's largest indoor triple loop roller coaster. The newest attraction in Galaxyland, opened on July 17, 2007, called the Galaxy Orbiter, begins at the Mindbender and intertwines with the entire park. Arguably the second most popular attraction in Galaxyland (after the Mindbender), the Drop of Doom was shut down in the early 2000s. The tower area was replaced shortly after by a more modern launch ride, the a S&S Double Shot Tower Ride. [ [http://www.s-spower.com/company.html S&S Worldwide] ] Only recently was the loading area replaced by an interactive laser ride based on the theme of the park's mascot, Cosmo. Other popular attractions include the TurboRide 3D Theatre which sits directly underneath the Mindbender, the privately owned Haunted Castle and 3D Fun House (also beneath the Mindbender), the Autosled roller coaster which is a tamer alternative to the Mindbender, the Swing of the Century, and also Galaxy Kids, a large play area for young children.

The wavepool has 6 wave bays, each with two panels with a total of convert|1500|hp generating waves up to two metres high.

The major slides are all on the east side of the park, with a children's play area and change room access behind them. On the west side is a tube ride which has been changed many times over, a three-person inflatable raft slide and the separately owned Bungee Tower where one can bungee jump directly over the wave pool.

West Edmonton Mall has an indoor lake which contains a salt-water habitat with three s and a replica of the Santa María, built during the 1986 World Exposition in . The Santa María has been used for an annual Christmas fundraiser, raising toys for underprivileged children. Also, the s, a long time favorite, had been replaced with the Deep-Sea Derby, a bumper boat ride with squirt guns, although the area is currently closed and under construction. Deep Sea Adventure is also home to the mall's aquatic life, most of which are housed beneath the main floor in the "Sea Life Caverns". Today, what was once the Dolphin's Lagoon is now the Sea Lions' Rock, with two of the three sea lions (Jazz and Banny) providing the entertainment for the current presentation labeled "Pirates of the Mall"

Ice Palace is a scaled down version of a (NHL) regulation sized located in the center of the mall. The occasionally practiced at the Ice Palace. This drew huge crowds during the years in the 1980s. The Oilers' contract for using the rink, however, has since expired. The rink is used for various hockey and other sporting tournemants, including a facility for the Annual Edmonton Corporate Challenge.

Professor WEM's Adventure Golf is an 18-hole course. The miniature golf course was originally known as Pebble Beach Mini Golf, and was designed to be a mini golf version of . The course was refurbished and given the Professor WEM theme in the mid-1990s.

Originally, the mall was home to three movie theatre complexes. However, as of 2008, only the Theatre, formerly Silver City , (with a fire breathing dragon and screen) is in the mall. Up until recently, a Discount Cinema, owned by Cineplex Odeon was located outside the Phase I entrance to Galaxyland, but it was shut down in 2005 and has since seen the majority of the space it occupied bought out by / store West 49 which also built an indoor in the basement. Prior to the opening of Silver City, in the mid 90's there was a Famous Players theatre located near the Palace Casino.

*ED'S Recreation Centre (formerly Red's), is an entertainment complex consisting of a bowling alley, , music stage, arcade, and restaurant. The stage is one of Edmonton's major music venues. Past players have included many bands, both Canadian and international. Sloan, , , , , , and are just some of the bands that have played at the venue. It was formerly known as the nightclub/restaurant/rec room Red's. At the end of June 2006, the owners of Reds closed its doors after they chose not to renew their lease. The mall separated it into two areas: converting the stage/restaurant area into a separate concert venue known as the Edmonton Events Centre; the other area which contains the lounge, the arcade and the Bowling Alley was re-dubbed Ed's Rec Room.
*Fantasyland Hotel [ [http://www.fantasylandhotel.com/ Fantasyland Hotel] ]
*A large flock of pink s (which have recently moved to for a breeding program)
*Palace
*An indoor [ [http://www.shootingcentre.com/ shooting range] ]
*2 mini golf courses
*Large-scale replica of the "Santa María", one of the ships sailed by .
*
*Sea Life Caverns
*Dance clubs Fever and Empire. Fever closed its doors in June 2007 although it is expected to re-open. The mall's history with nightclubs has been rather ill-fated as the spaces occupied now by Fever and Empire as well as other locations nearby the Edmonton Events Centre and Ed's Rec Room have seen several tenants over the years including The Joint and Ka'os Nightclub.
*KidTropolis (shut down)
* skate shop with indoor skate park, built in a converted cinema.
*Circuit Circus arcade
*2 's, one of which is located at the back of Circuit Circus.
*An inter-denominational chapel.
*3 Radio Stations, owned by Newcap Radio. K-97 (classic rock), 790 CFCW (classic country and news/sports programming) and 96.3 Capital FM. The Newcap owned area features studios, offices, a small free museum and a merchandise store. Newcap is located in the space formerly occupied by Playdium.

The mall also includes several "theme areas" including:
*Bourbon Street — featuring clubs and restaurants in a New Orleans-influenced setting. Several restaurants and clubs are located here including with BP's Lounge, , Ribhouse, , , Moxie's, Earl's, Jungle Jim's and the Comedy Club. The lighting in this area is left intentionally darker than other parts of the mall in order to simulate a nighttime atmosphere.
*Europa Boulevard — eclectic shops in an area designed to look like a an streetscape. It is home to PetCetera and . Several rentable conference rooms look down on the Boulevard.
*Chinatown — Businesses catering to the Asian population, headlined by T & T Supermarket (in the former Canadian Tire location). It is located directly above Bourbon Street and features a miniature koi pond with a bridge.

An expansion is evidently underway for an additional 30,000 m² (320,000 ft²) of retail space, a facility for sports, trade shows and conventions, a 12-story office building, and a 600-unit , along with more parking. [International Council of Shopping Centers. [http://www.icsc.org/srch/apps/newsdsp.php?storyid=1152&region=main "West Edmonton Mall gets go-ahead for expansion"] ] [ [http://www.westedmontonmall.com/play/galaxyland.asp "Galaxyland Amusement Park"] ]