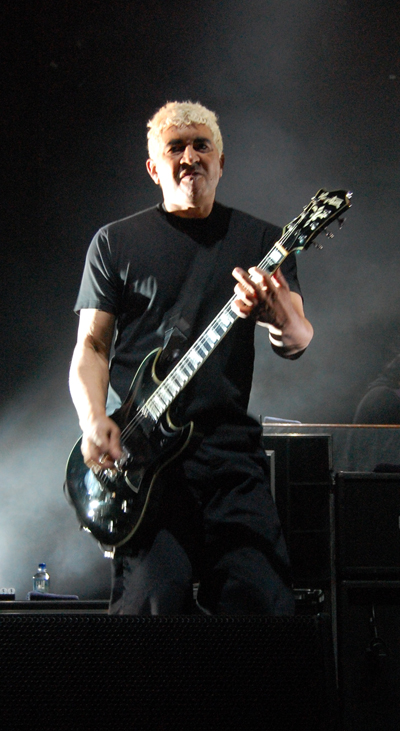 Pat Smear (born Georg Ruthenberg on , ), is a musician who has been a regular member of several well-known bands, albeit of different subgenres: , Nirvana and the . He is also known for co-hosting the fashion show "" with friend and supermodel .

He was born and raised in West Los Angeles. He was born to an /Native American mother and a German/ father. His parents forced him to take lessons at a young age, and a few years later, he began teaching himself to play . He lists his influences as , Brian James, Steve Jones, and . As a teenager in , Pat Smear met and together they formed with bassist and drummer Dottie Danger (the of who went on to front ).

Carlisle was soon replaced by Don Bolles and, in , the band released their first album, "". Produced by , the record is now defined as a milestone in the history of . The Germs endured for one more year before finally disbanding in after Darby Crash committed . After The Germs, Smear had a brief stint as a member of seminal punk band .

Pat would go on to play with , and make two solo albums of his own; "So You Fell In Love With A Musician" and "Ruthensmear". Around this time Pat received an offer to join the , replacing guitarist , (who had left the Chili Peppers). He said he would accept the offer if the band stopped playing funk, but the band didn't want to do that. While working on Breakin', Smear became friends with . In he received a call from her husband, Nirvana's frontman , asking him to join his band. Pat thought that it was his friend, Carlos "Cake" Nunez playing a joke on him, but Love had told Pat few days prior that Cobain was going to call him. Pat accepted immediately and played his first show with Nirvana on "" on , . He toured with Nirvana for about six months before Cobain died in April 1994, and also appeared on their album "".

Following the end of Nirvana, drummer was beginning to form his own band, which would become known as the . Smear joined the group from its inception, but because the band's first album was a collection of demos recorded solely by Grohl, Smear did not appear on a Foo Fighters album until 1997's "". Later that year, due to fatigue, Smear announced his departure from the group during a live performance atop , right before that year's .

Most recently, he has been employed as a creative consultant in a motion picture about the Germs and Darby Crash, entitled "What We Do Is Secret", after one of the band's best-known songs. The film was released at the Los Angeles Film Festival on , 2007, and is scheduled for wider release in . He is depicted by the actor .

In 2005 he began performing reunion shows with The Germs, with actor (who portrays Darby Crash in the film) filling in as lead vocalist.

In May 2006, the Foo Fighters announced they would play limited acoustic dates across North America. It was announced Smear would be one of the touring musicians aiding the band during the shows. He also appeared with them on "" in September 2006 and on the same stage as and at 's 30th Anniversary party. On October 21 and 22, 2006 he also joined the band for both days of the Bridge School Benefit Concert, hosted by . In addition he is a featured musician on the Foo Fighters live album "". In August 2007, he appeared on stage with the Foo Fighters at the UK's , , Edinburgh and , Dublin, Ireland.

The previously unrecorded song, , which is on Smear's 1988 SST album , appears on the soundtrack of the 2007 film "Cthulhu".

On Sunday, September 9, 2007, Smear joined the Foo Fighters for their MTV Music Video Awards party room show. Smear has been added to the band as a touring guitarist for their supporting tour of the album "". Smear also is credited with playing guitar on the song "Let It Die" off the same album. On Saturday, , , Smear joined the Foo Fighters for an appearance on "" and also joined the Foo Fighters on stage at the , confirming his return to the band.He appeared with the band on on . He played both Foo Fighters dates at the O2 Arena, London on November 17 and 18 2007. On , Smear also performed live with Foo Fighters at the 2008 Grammy Awards broadcast on CBS from a stage outside the Staple Center in Los Angeles. On January 23rd, 2008 on the first show for the Foo Fighters' "Echoes, Silence, Patience and Grace" tour in Dallas, he performed several songs with the band, and on the he appeared on stage (with the whole touring band) when played "The Pretender" on the .

On Monday February 25th he performed for approx. half of the set list for the Foo Fighters at the Allstate Arena in Rosemont, IL (Chicago Suburb). On Monday, March 3, 2008, Smear joined the Foo Fighters for the acoustic portion of their show at Cox Arena in San Diego, California. Despite urging by Grohl, though, Smear did not play a guitar solo during band introductions. On Thursday, March 6, 2008, Smear joined the Foo Fighters for all portions (acoustic/plugged) of their show at the Forum in Inglewood, California. Urged by Grohl, Smear did play a guitar solo (8-notes) during band introductions.Since then, he has played a solo whenever asked to by Dave.

He also played at the 2 concerts at Wembley stadium on 6th and 7th of June 2008. On June 21, 2008 Smear performed live with Foo Fighters at the 2008 Hurricane Festival in Germany.

Pat almost exclusively uses guitars. He has been using them since his days with Germs and has been collecting them ever since. He has been noted as having one of the largest collections of Hagstrom guitars in the United States. He lists Gibson guitars as his second favorite, notably the SG.