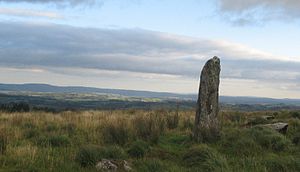 A menhir (French, from Middle Breton : men, stone + hir, long[1]) is a large upright standing stone. Menhirs may be found singly as monoliths, or as part of a group of similar stones. Their size can vary considerably; but their shape is generally uneven and squared, often tapering towards the top. Menhirs are widely distributed across Europe, Africa and Asia, but are most numerous in Western Europe; in particular in Ireland, Great Britain and Brittany. There are about 50,000 megaliths in these areas[2], while in northwest France alone there are 1,200 menhirs.[3] They originate from many different periods across pre-history, and were erected as part of a larger megalithic culture that flourished in Europe and beyond.

The function of menhirs has provoked more debate than practically any other issue in European pre-history. Over the centuries they have variously been thought to have been used by Druids for human sacrifice, used as territorial markers or elements of a complex ideological system, or functioned as early calendars.[4] Until the nineteenth century, antiquarians did not have substantial knowledge of prehistory; and their only reference points were provided by Classical literature. The developments of radiocarbon dating and tree-ring calibration have done much to further human knowledge in this area.

The word menhir was adopted from French by 19th century archaeologists. It is a combination of two words found in the Breton language; men and hir. In modern Welsh they are described as maen hir, or "long stone". In modern Breton, the word peulvan is used.

The Géant du Manio, a 6.5 metre menhir in Carnac, Brittany.

Practically nothing is known of the social organization or religious beliefs of the people who erected the menhirs. We have no trace even of these people's language; however we do know that they buried their dead, and had the skills to grow cereal, farm and make pottery, stone tools and jewelry. Identifying their uses remains speculation. However, it is likely that many uses involved fertility rites and seasonal cycles. Until recently, menhirs were associated with the Beaker people, who inhabited Europe during the later third millennium BC; the European late Neolithic and early Bronze Age. However, recent research into the age of megaliths in Brittany strongly suggests a far older origin, perhaps back to six to seven thousand years ago.[5]

Many menhirs are carved with megalithic art. This often turned them into anthropomorphic stelae, although images of objects such as stone axes, ploughs, shepherd crooks and yokes were common. With the exception of the stone axe, none of these motifs are definite, and the name used to describe them is largely for convenience. Some menhirs were broken up and incorporated into later passage graves where they had new megalithic art carved with little regard for the previous pictures. It is not known if this re-use was deliberate or if the passage grave builders just saw menhirs as a convenient source of stone (Le Roux 1992).

In the Middle Ages the standing stones were seen to have been built by the giants who inhabited the earth before the biblical flood. Many of the megaliths were destroyed or defaced by early Christians, but it is estimated that some 50,000 megaliths once stood in Northern Europe, where almost 10,000 now remain.[6] 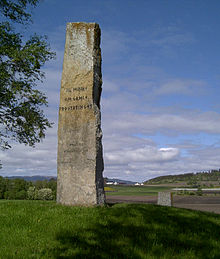 In Scandinavia, menhirs are called bautasteiner or bautastenar and continued to be erected during the Pre-Roman Iron Age and later, usually over the ashes of the dead. They were raised both as solitary stones and in formations, such as the stone ships and few stone circles. Sometimes, they were raised only as commemoration to great people, a tradition which was continued as the runestones.

Frostating, with its seat at Tinghaugen in Frosta municipality in the county of Nord-Trøndelag, was the site of an early Norwegian court. The site is represented by the Frostatinget bautasten.

The tradition was strongest in Bornholm, Gotland and Götaland and appears to have followed the Goths, during the 1st century, to the southern shore of the Baltic Sea, (now Northern Poland) where they are a characteristic of the Wielbark culture.[7][8] 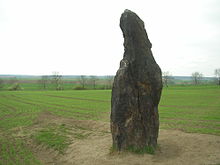 In Sweden by the 13th century menhirs were erected as markers for the graves of warriors. The following lines are taken from the introduction of the Heimskringla by Snorri Sturluson;

As to funeral rites, the earliest age is called the Age of Burning; because all the dead were consumed by fire, and over their ashes were raised standing stones.

For men of consequence a mound should be raised to their memory, and for all other warriors who had been distinguished for manhood a standing stone; which custom remained long after Odin's time.[9]

In the same work, Snorri wrote that the Swedes burnt their dead king Vanlade and raised a stone over his ashes by the River Skyt (one of the tributaries of the River Fyris):

The Swedes took his body and burnt it at a river called Skytaa, where a standing stone was raised over him.[9]

The tradition is also mentioned in Hávamál.

The Kerloas menhir, the tallest standing menhir in Brittany[10])

Brittany stands out in the distribution of menhirs by virtue of both the density of monuments and the diversity of types. The largest surviving menhir in the world is located in Locmariaquer, Brittany, and is known as the Grand Menhir Brisé (Great Broken Menhir). Once nearly 20 meters high, today, it lies fractured into four pieces, but would have weighed near 330 tons when intact. It is placed third after the Thunder Stone in St. Petersburg and the Western Stone in the Western Wall as the heaviest object moved by humans without powered machinery.

Alignments of menhirs are common, the most famous being the Carnac stones in Brittany, where more than 3000 individual menhirs are arranged in four groups, and arrayed in rows stretching across four kilometres. Each set is organised with the tallest stones at the western end, and shorter ones at the eastern end. Some end with a semicircular cromlech, but many have since fallen or been destroyed.[5]

The second largest concentration of menhirs in France is at the Cham des Bondons, located on high open limestone plain in the granitic Cévennes. The site is today protected by the Parc National des Cévennes. From the time pastoralism was established, the site was kept open by controlled burning and grazing.[11]

On the island of Corsica menhirs are found in Filitosa, a megalithic site in southern Corsica. The period of occupation spans from the end of the Neolithic era and the beginning of the Bronze Age, until around the Roman times in Corsica.

Numerous menhirs dot the lands across Armenia, and are called (Armenian: Վիշապաքար; pronounced Vishapakar of Vishap; Vishap translates to "dragon" or "serpent" and Kar translates to "stone"). The stones are cigar-shaped and are typically 10 to 20 feet tall. They are often found in the mountains near the sources of rivers or lakes. A large number of them have been carved in the shape of a fish. The earliest known vishapkar is thought to be from between the 18th to 16th centuries BC. An inscription in ancient Urartian cuneiform written upon a vishap at the temple of Garni shows that they were created prior to the Urartian Kingdom (pre-8th century). 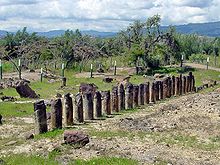 Menhirs were erected by the U'wa people of Colombia in their ancestral territory. They believe that the menhirs are the ancients of the U'wa clans who were turned into the stone piers of the world. Menhirs can be found in Chita and Chiscas, in Boyacá.[citation needed]

There are 114 menhirs in the Provincial Park Los Menhires, in Argentina. The stones are approximately 4 to 5 meters high and 1 meter wide. They were erected by the Tafí people, an indigenous culture of the Tucumán province, and were used in fertility rites.[citation needed]

The graves of the "Latins" and the "Jidovs" near the village of Balwan (Bovan), north of Aleksinac in Serbia were marked by large boulders.[12]

At Mudumala (Mahabubnagar District, Andhra Pradesh), an archeological site was dotted with about 80 big menhirs some as tall as 14 feet and several hundreds of smaller menhirs scattered all over the agricultural fields. Dr.Rao and his team visited the site on the days of summer and winter solstice and equinox and found that particular rows of stones were aligned to the rising and setting Sun on these days. "This suggests the megalithic community here was aware of the solar trajectories," he said.[13]

The character Obelix in the Asterix books of René Goscinny and Albert Uderzo is a menhir sculptor and deliveryman. Obelix (who has superhuman strength) is frequently depicted carrying a menhir on his back. Menhirs feature prominently in the stories Asterix and the Big Fight, in which the village druid loses his memory when a menhir thrown by Obelix lands on him; and Obelix and Co., in which Obelix expands his business, triggering a brief menhir craze across the Roman world, during which menhirs are promoted as status symbols and decorative novelties.

A menhir is used as an obstacle and descriptor of a specific room in the 1981 text-based interactive fiction computer game, Zork II.

In the computer game, Wii Sports Resort, there is a large menhir upon the side of the volcano on Wuhu Island.

In the Playstation 3 game, Final Fantasy XIII, the 'Menhirrim' are titan-sized, statuesque spirit-beings made of stone.