A piece of seitan 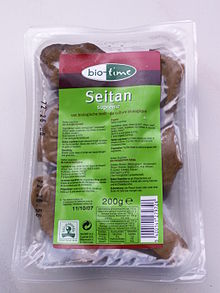 /ˈseɪtæn/), wheat meat, mock duck, gluten meat, or simply gluten, is a food made from the gluten of wheat. It is made by washing wheat flour dough with water until all the starch dissolves, leaving insoluble gluten as an elastic mass which is then cooked before being eaten.

Wheat gluten is an alternative to soybean-based meat substitutes such as tofu[who?]. Some types of wheat gluten have a chewy or stringy texture that resembles meat more than other substitutes. Wheat gluten is often used instead of meat in Asian, vegetarian, Buddhist, and macrobiotic cuisines. Simulated duck is a common use for wheat gluten.

Although Seitan was first developed in China, it has historically been very popular in the cuisines of Japan and other East and Southeast Asian nations. In Asia, it is commonly found on the menus of restaurants catering primarily to Buddhist customers who do not eat meat. 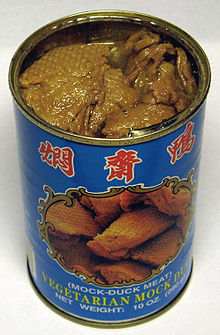 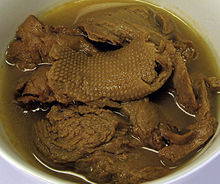 Fried wheat gluten ("vegetarian mock duck"), product of Taiwan. Contents of the can above.

Wheat gluten, called miàn jīn in Chinese (traditional: 麵筋, simplified: 面筋, literally "noodle/dough tendon"; also spelled mien chin or mien ching) is believed to have originated in ancient China, as a meat substitute for adherents of Buddhism, particularly some Mahayana Buddhist monks, who are strict vegetarians (see Buddhist cuisine). One story attributes the invention of imitation meat to chefs who made it for Chinese emperors who, traditionally, observed a week of vegetarianism each year (cf., Vegetarian Paradise 2 Menu, New York City[1] and Harmony Restaurant Menu, Philadelphia).[2] Miàn jīn is often deep fried before being cooked in Chinese cuisine, which confers a crispy rind that enhances the texture of the gluten.

There are three primary Chinese forms of wheat gluten:

Miàn jīn is also available in Asian grocery stores in canned and jarred forms, often marinated in combination with peanuts or mushrooms. Such canned and jarred gluten is commonly eaten as an accompaniment to congee (boiled rice porridge) as part of a traditional Chinese breakfast.

Freshly prepared miàn jīn can be difficult to find in Chinese restaurants other than those specializing in Buddhist or vegetarian cuisine. Depending on its method of preparation and ingredients used, both fresh and preserved miàn jīn can be used to simulate pork, poultry, beef, or even seafood. 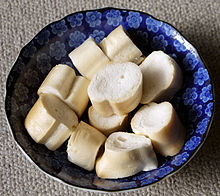 There are two main forms of fu, the raw nama-fu, and the dry yaki-fu:

In Japan, seasoned "gluten meat" (i.e. seitan, as cooked in the macrobiotic manner) is not well known or widely available, despite the macrobiotic diet's Japanese origins. When used, the terms for this food are rendered in katakana as グルテンミート (Romanized "gurutenmīto," from the English "gluten meat"), or, rarely, セイタン ("seitan"). Outside macrobiotic circles, these terms are virtually unknown in Japan, and they do not typically appear in Japanese dictionaries.

In Vietnam, wheat gluten is called mì căng or mì căn, and is prepared in a similar fashion to Chinese miàn jīn. Along with tofu, it is a part of the Buddhist cuisine of Vietnam.

Seitan, a neologism of Japanese origin, is the name used to refer to wheat gluten in the macrobiotic system of cooking and health, as formulated by the Japanese-born philosopher George Ohsawa (1893–1966). According to the Oxford English Dictionary, it is said to have been coined by Ohsawa in the early 1960s, but its etymology is uncertain, with the most likely explanation being that it is derived from the Japanese sei- ("to be", "to become"), or -sei ("of the nature of," "made of," e.g. in shokubutsu-sei, "made of vegetable") + tan-, as in tanpaku(shitsu) ("protein").[3]

As prepared in macrobiotic practice, seitan consists of powdered wheat gluten, which is extracted from whole wheat flour by washing the flour and rinsing away the starch. The gluten powder (also called vital wheat gluten or gluten flour) is then mixed with just enough water to form a stiff paste, which is then kneaded in order to produce a firm, stringy texture. The dough is then cut into pieces and cooked via steaming, boiling, frying, or other methods. While seitan is itself rather flavorless, it holds a marinade very well and is usually simmered in a dashi (broth) made from soy sauce, kombu, ginger, and sometimes also sesame oil.

Since the mid-20th century, wheat gluten (generally known by its macrobiotic name, seitan) has been increasingly adopted by vegetarians in Western nations as a meat substitute.

It is sold in block, strip and shaped forms in North America, where it can be found in some supermarkets, Asian food markets, health food stores and cooperatives. Some companies also sell powdered gluten (marketed under the names "vital wheat gluten" or "gluten flour"), for those who wish to make their own gluten from scratch. Wheat gluten is also used by bakers to increase the chewiness of breads. The block form is most prevalent and is often flavored with shiitake or portobello mushrooms, fresh coriander or onion, or barbecue sauce, or packed in a vegetable-based broth. In strip form, it is usually packed to be eaten right out of the package as a high-protein snack. Shaped seitan products, in the form of "ribs" and patties, are usually flavored with barbecue, teriyaki or other savory sauces.

Additional uses of wheat gluten include the partial use of seitan in products such as Morningstar Farms, LightLife, Gardein, and, most famously, Tofurkey, which is known for its mock-turkey Thanksgiving meal. Wheat gluten is also used by The African Hebrew Israelites of Jerusalem, a vegan African American religious sect that operates a chain of restaurants called Soul Vegetarian, to produce a vegetarian sandwich called the Garvey Burger. In North America, there are also several brand-name meat substitutes, such as Protein Chef, which are used in the restaurant and food service markets.

Wheat gluten is also often used as a filler in pet foods. Wheat gluten from China adulterated by melamine has been blamed as the cause of a the 2007 pet food recalls.[4]