The Evening Gazette is a newspaper serving the Teesside area of England. It is published by the Gazette Media Company Ltd, which is a regional arm of the Trinity Mirror group. The Evening Gazette is written and published in Middlesbrough, along with many other publications. The Gazette Media Company Ltd is also well-known locally for being the publisher of the free Herald & Post newspaper.

The Evening Gazette is the most popular daily newspaper in Teesside, and has been an integral part of life in the area since 1869, when it was founded as the North-Eastern Daily Gazette by the Scot, and eventual Liberal Member of Parliament for Aston Manor, Hugh Gilzean Reid. It was also at this time, that a first premises was established on Zetland Road, Middlesbrough. It mainly provides local news, but also covers national, international and sports news as well as having various supplements relating to lifestyle, business, and events.

The current main Evening Gazette building is located on Borough Road in the centre of Middlesbrough. This houses the editorial staff as well as various operational departments such as advertising, production and finance. There is a further Gazette Media Company site on the Riverside Industrial Estate which houses the printing press.

There is also an educational centre at the Borough Road site, the Gazette Media Centre.

Many local newspapers in the mid-20th century produced a special sports edition on Saturday evening. Before football results were widely available on television and radio such editions were the source of results for players of the football pools. Serious players needed the results as soon as possible since, on afternoons where there were relatively few matches ending in a draw, the payouts from the pools would be large and claims would have to be made quickly, typically by telegram. While the regular evening edition typically "went to bed" in mid afternoon, if not earlier, the sports edition had to be on news stands as soon as possible after the conclusion of football games across the country. Most games started at 3 p.m. and concluded around 4:45 p.m. The sports edition was usually available by 6 p.m. It was popular with newsagents who capitalized on the rush of customers its appearance generated to sell cigarettes and other "impulse buys". The edition was small compared to the regular edition, often as few as 3 broadsheets, making 12 pages when folded. Plenty of space was devoted to advertising, as well as lists of results and short descriptions of games.

In the 1960s the Gazette began printing the sports edition on pink newsprint. Soon the edition began to be known as "the Pink". To encourage people to buy the sports edition, at a time when television was affecting its sales, competitions were run "In the Pink" with cash prizes.

In a similar vein, a sports newspaper published in Sheffield is known as the "Green Un" for the green newsprint used. 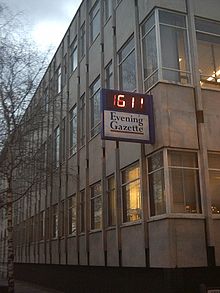