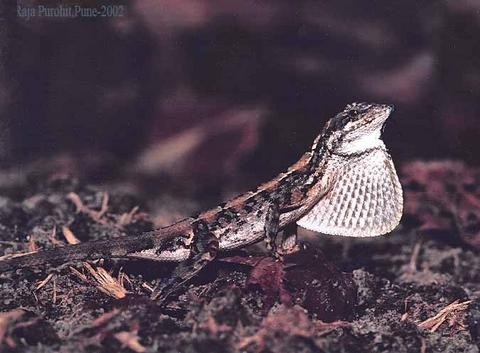 The species is found mostly on the ground in open ground patches in thin . When disturbed this lizard sometimes runs with a bipedal gait.

Upper head-scales small, sharply keeled; "canthus rostralis" and supraciliary edge sharp, with much enlarged scales. Dorsal scales larger than ventrals, with sharp keels forming straight longitudinal lines; lateral scales smallest, uniform or intermixed with scattered enlarged ones. The fore limb does not extend on to the vent, if laid backwards; the hind limb reaches to the orbit, if laid forwards; the lower thigh is rather shorter than the foot (measured from the heel to the tip of the longest toe), the length of which is only three-fourths of the distance between the shoulder and hip joints. Limbs above with uniform strongly keeled scales. The length of the limbs varies very much : in some specimens the hind limb stretched forwards does not extend beyond the orbit, in others it reaches the end of the snout or even considerably beyond. Brown, with a series of dark spots along the middle of the back, the spot on the neck being the darkest; a whitish band along each side of the back. Gular appendage tricoloured—blue, black, and red.

Tail round, slender, once and a half to twice as long as the head and body, covered with equal keeled scales. Olive-brown above, with a series of rhomboidal spots along the middle of the back; a more or less distinct light band along each side of the back. Gular appendage tricoloured—blue, black, and red; this appendage is more developed in the breeding-season, and in the majority of indivduals, at all events, is not coloured at other times.

This species attains a maximum length of 8 inches, of which the tail takes 5 inches. From snout to vent 3-5 inches.

M. A. Smith notes that there are two size variants with intermediates :
* A larger form. From snout to vent 70-80 mm. ; tail once and a half to twice the length of the head and body ; hind-limb not reaching to beyond the snout;, lateral scales not intermixed with larger ones ; no enlarged scales on the occiput. This form appears to be confined to the district around Bombay. This may possibly represent Jerdon's "deccanensis".
* A smaller form. From snout to vent 40-50 mm. ; tail two to three times the length of the head and body ; hind-limb reaching to beyond the tip of the snout ; lateral and occipital scales intermixed with larger ones. This form ranges over the rest of India and Ceylon. The typical form is from Pondicherry, and Gunther's "minor", from Madras, is, therefore, a synonym of it. [Smith, M. A. 1941. Fauna of British India. Reptilia and Amphibia]

India from the base of the Himalayas to Cape Comorin, and from the Punjab and Kutch (not Sind) to Western Bengal; Sri Lanka.