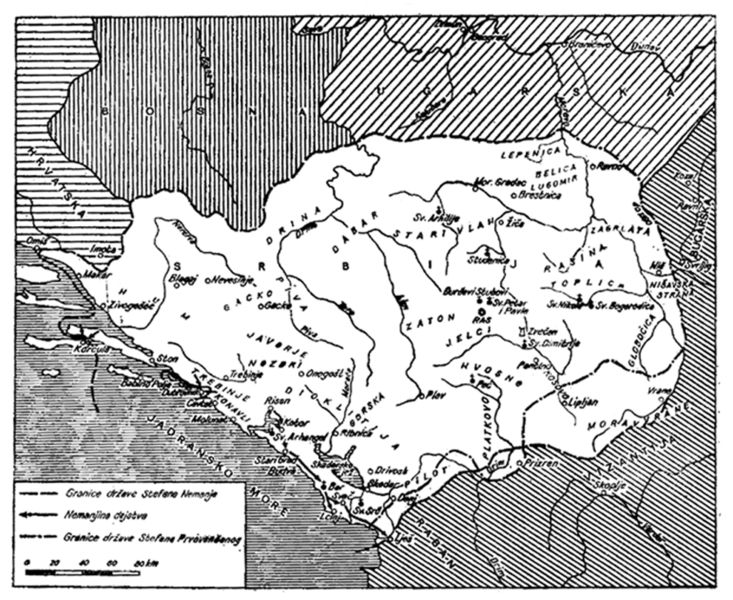 Raška (SrL|Рашка; alternative spellings have included "Raschka", "Rascia" and "Rassa") was the central and most successful Serbian state (or "", area ruled by a "župan") that unified neighboring Serbian tribes into a main medieval Serbian state in the .

Constantine VII "Porphyrogenitos" describes Raška (Rascia) in "" as being settled by at the start of the 7th century. Also in "De Administrando Imperio", he wrote that the Serbs resided in Zachumlie (), Trebounia (), the Zeta (), Bosnia () and (Paganija).

From the early 7th century, the history of Raška becomes intimately bound with the history of the Serb , which ruled from Raška. The house was named for , who was the great-great-grandson of the who led the Serbs to the from .

The House of Vlastimirović was later succeeded by the and of the House of Nemanjić transformed Raška into powerful in the 14th century.

The state of Raška was named after the in present-day south-western . It is thought that Sarmatian , an ancient tribe from the that probably gave its name to the Slavic Serbs, left their traces around the river (Araxes in GreekFact|date=October 2007 ), which is also called "Rashki". This name is found wherever the name Serb is found in clusters.

Later usage of the term

Between 15th and 18th century, term "Raška" ("Rascia", "Ráczság") was used to designate southern parts of the that were inhabited by Serbs who migrated there from the territory of original Raška in the .