/ˈɛl məkˈfɜrsən/; born 29 March 1964) is an Australian model, actress, and businesswoman nicknamed "The Body". She is perhaps best known for her record five cover appearances for the Sports Illustrated Swimsuit Issue beginning in the 1980s. She is also known as the founder and primary model for a series of business ventures including Elle Macpherson Intimates, a lingerie line, and "The Body", a line of skin care products. According to Forbes, Macpherson possesses assets around $60 million. In 2010, she became the host and executive producer of Britain and Ireland's Next Top Model.

Macpherson was born Eleanor Nancy Gow, in the Killara neighbourhood of Sydney, Australia, the daughter of entrepreneur and sound engineer Peter Gow, a former president of a Sydney rugby league team, the Cronulla-Sutherland Sharks.[2] Her mother Frances worked as a nurse before she married. Macpherson grew up in Killara, a North Shore suburb of Sydney, and she attended Killara High School. Macpherson is the eldest of four children including the businesswoman and environmentalist Mimi Macpherson.[3] Macpherson’s parents divorced when she was 10 years old, and she moved with her mother and two siblings. Her mother later remarried, and a clerical mistake in registering at her new school meant that her name was changed from her father's, Gow, to her stepfather's, Macpherson.[4][5]

At age 17, Macpherson enrolled to study law at Sydney University. Before beginning her university studies, Elle visited the United States to spend one year doing modelling work in order to earn money to pay for her law books.[6] Macpherson travelled to New York City, where she initially signed up with the Click Model Management.

Macpherson's modelling career began in 1982 with a television commercial for Tab which established her as a "girl next door" figure in Australia.[7] By 1986, Time magazine had already put her on the cover (with a feature entitled "The Big Elle"). By that time, she had also appeared on the covers of Elle, GQ, Harper's Bazaar, Vogue, and Playboy.[citation needed] She co-hosted along with Naomi Campbell the Miss Universe 2001 pageant.

Already possessing some widespread name recognition, Macpherson cemented her high profile through frequent appearances in Elle, where she appeared in every issue for six straight years. During that time, and at the age of 21, she married Gilles Bensimon, the creative director of Elle.[8]

Eventually she gained even more exposure through Sports Illustrated magazine's annual Swimsuit Issue. She appeared on the cover a record five times: 1986, 1987, 1988, 1994, and 2006. Her popularity had reached such a level that Australian government offered her a position on its tourist commission as an unofficial ambassador.[9]

In the 1980s, together with Linda Evangelista, Christy Turlington, Tatjana Patitz, Naomi Campbell, Kate Moss, Pavlína Pořízková and Cindy Crawford, Macpherson became part of the new generation of supermodels. In 1994, she left her agency, Ford Models, to work more lucratively for her own company, Elle Macpherson Inc. This company would serve as a financial and organizational base for her later endeavours.[10]

MacPherson soon went on to produce her own highly popular series of calendars, each of which was accompanied by a "making of" television program in 1992, 1993, and 1994. She used this success as a springboard to create the "Your Personal Best – The Body" series of workout videos.[10]

Macpherson later diversified her portfolio of businesses, and in 1990 launched her lingerie collection 'Elle Macpherson Intimates' in partnership with Bendon Limited Apparel. Intimates met with remarkable international success, becoming the single best-selling lingerie line in both Great Britain[11] and Australia[12] Breaking the mould of many models, Macpherson took an active role in the development and management of the company, serving as Chief Marketing Officer and later Creative Director. While nursing her second child, she spearheaded the development of a signature maternity bra line.[13] Intimates has retained a high brand recognition into the 2000s, appearing as a featured brand on America's Next Top Model.

More recently, Macpherson created her own label of beauty products: "Elle Macpherson – The Body". She has launched or served as spokesmodel for campaigns by Boots,[14] Invisible Zinc,[15] and Hot Tuna.[16]

The BBC-TV series The Money Programme aired a documentary which followed Macpherson through her day-to-day business as she continued to develop her international lingerie business. 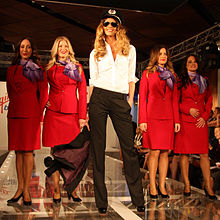 In March 2008, Macpherson signed a three-year spokesperson deal with Revlon cosmetics. She has since been featured in print and advertising campaigns for that company;[17] it has been announced by Macpherson herself that she would expand her underwear line by creating a new Lingerie Collection baptised 'Obsidion' which would be launched in Spring 2010.[18]

Macpherson made her movie debut playing an artist's model in the 1994 Sirens, which also starred Hugh Grant, Sam Neill, Tara FitzGerald, Kate Fischer, and Portia de Rossi. Macpherson gained nine kg (20 lbs.) to disguise her athletic frame for the period role.[19] After Sirens, Macpherson followed with a two-year series of acting roles, appearing in films such as Woody Allen’s Alice, Batman & Robin alongside George Clooney, The Edge with Anthony Hopkins, and The Mirror Has Two Faces with Barbra Streisand.

In 1999, Macpherson appeared in five episodes of the American TV series Friends, as Joey's roommate and girlfriend, Janine Lecroix. Macpherson went on to act in the movie Jane Eyre with William Hurt, and she has also appeared alongside Ben Stiller and Sarah Jessica Parker in If Lucy Fell. Her most controversial acting was in the Showtime cable network miniseries, A Girl Thing, in which she plays a woman experimenting with bisexuality along with Kate Capshaw. In 2001, she acted in the Italian movie South Kensington.

Macpherson played the modelling agent, "Claudia Foster" in the "CW"-network drama series, The Beautiful Life, appearing with Mischa Barton, Sara Paxton and Corbin Bleu. The show centred on aspiring models working for a modelling agency, trying to make it big in New York City, and in the Fashion World.[20] The show was cancelled after two episodes.

Britain and Ireland's Next Top Model

In July 2010, Macpherson became the new host of Britain and Ireland's Next Top Model, taking over from Lisa Snowdon. She also serves as executive producer on the show. Joining Macpherson on the revamped show are OBE winning fashion designer Julien Macdonald, fashion stylist Grace Woodward and male model Charley Speed.[21]

Victim of an attempted extortion

According to a police statement reproduced online, between 11 and 22 July 1997 William Ryan Holt and Michael Mischler broke into Macpherson's Los Angeles house while she was away on business in Chicago.[22] They stole an estimated $100,000 worth of jewellery, $6,000 in cash, and nude photographs. The two were arrested on 4 August 1997.

Macpherson is a European Ambassador for RED, an initiative set up by Bono and Bobby Shriver to raise money and awareness for the Global Fund to Fight AIDS, Tuberculosis and Malaria[23] and to help eradicate AIDS for women and children in Africa. She is also an ambassador for UNICEF.[24] In her native Australia, she is an ambassador for the Smile Foundation, which helps the families of children with rare diseases and organises government research grants.[4][5] She has also modelled for charitable causes including fundraising for 2007 British flood victims,[25] wounded veterans,[26] and child welfare group Absolute Return for Kids.[27]

Early in her career, Macpherson campaigned against the use of fur in modelling.[28] She later drew the ire of animal welfare groups by starting to model in fur herself.[29][30][31] She was again criticised by animal rights activists when in an interview on Twitter in 2010,[32] she made comments, which she later described as a joke, claiming to use rhinoceros horn as a herbal medicine.[33] She subsequently issued a statement saying the idea of consuming products derived from endangered species was "abhorrent".[34] The previous year, she joined a boycott of a London restaurant for serving meals containing bluefin tuna, an endangered species.[35]

Macpherson has also had relationships with Billy Joel[38][39] and Kevin Costner.[40]

Macpherson resides most of the time in Britain along with her two sons. She speaks fluent French and conversational Italian and Spanish.[13]