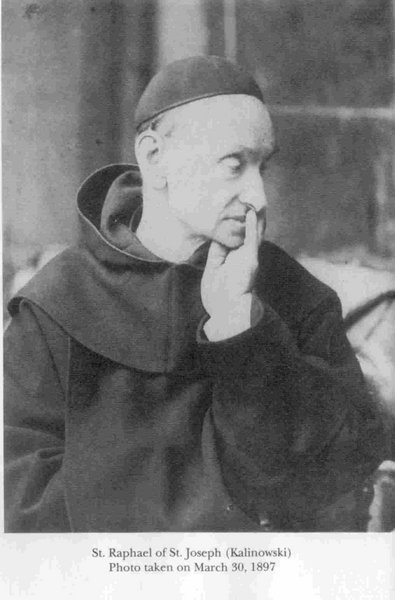 Raphael Kalinowski, O.C.D. ( _pl. Rafał Kalinowski, _lt. Rapolas Kalinauskas) (September 1, 1835 &ndash; November 15, 1907) was a Polish born as Józef Kalinowski inside the Russian partition of Polish-Lithuanian Commonwealth, in the city of (Pl: "Wilno"; Ru: "Вильнюс"), now the of the Republic of Lithuania. He was a teacher, engineer, prisoner of war, royal tutor, and priest, who founded many monasteries around Poland after the suppression by the Russians. He was canonized by in 1991, the first man to be so recognized in the order of the Discalced Carmelites, since Saint .

He was born as Joseph (Józef) to a noble "" family in the city of Vilna (Wilno). At the time he was born, the area was known as a Russian partition, though it had formerly been part of the . He was the second son of Andrew Kalinowski, an assistant superintendent professor of mathematics at the local ("Instytut Szlachecki"). His mother, Josephine Połońska, died a few months after he was born, leaving him and his older brother Victor without a mother. His father then married Josephine's sister (a practice that was not uncommon in that time), Sophie Połońska, and had three more children: Charles, Emily, and Gabriel. But then Sophie died in 1845, so Andrew married again, this time to the 17-year-old Sophie Puttkamer, daughter of Maryła Wereszczak (famous at the time for being written about by ), who became mother to all of Andrew's existing children, as well as having four more of her own: Mary, Alexander, Monica, and George.

From the age of 8, Kalinowski attended the Institute for Nobles at Vilna, and graduated with in 1850.

Choice of colleges was strictly limited by the Russians, so in 1853 he enlisted in the Russian Army and entered the Nicholayev Engineering Academy ("Mikołajewska Szkoła Inżynierii"). He was promoted to Second Lieutenant in 1856. In 1857 he worked as an associate professor of mathematics, and from 1858-1860 he worked as an engineer who helped design the // portion of the .

In 1862 he was promoted to Captain, but he resigned from the in 1863 and became Minister of War during the Polish insurrection known as the . On 24 March 1864 he was arrested and condemned to death by firing squad, but his family intervened, and the sentence was changed to 10 years in a . He was forced to trek overland to the s of Usole, near , , a journey which took nine months.

Three years after arriving in Usole he was allowed to move to Irkutsk. From 1871-1872 he did meteorological research for the Siberian section of the Russian Geographical Company. He also participated in Benedict Dybowski's research expedition to at .

He returned to in 1874, and became a tutor to 16-year-old Prince . August was diagnosed with in 1876, and Kalinowski accompanied him to various health destinations in France, , Italy, and .

In 1877 Kalinowski joined the Carmel of , and took the name "Brother Raphael of St. Joseph." The name "of St. Joseph" had nothing to do with his birthname -- it was common for many Carmelites to list their name as "of St. Joseph", after the "Convent of St. Joseph" founded by , co-founder of the Discalced Carmelite Order.

Kalinowski was as priest at Czerna in 1882 by Bishop Albin Dunajewski, and in 1883 became Prior of the convent at Czerna.

He founded multiple Catholic organizations around Poland and the , most prominent of which was a monastery in , Poland, where he was also Prior. He founded a Carmelite Sisters convent in in 1884, and in 1888.

From 1892-1907 he worked to document the life and work of Mother Theresa Marchocka, a 17th century Discalced Carmelite, to assist with her beatification.

He was a noted spiritual director of both Roman Catholic and faithful. [ [http://www.carmelite.com/saints/raphael.shtml Carmelite.com &gt; Our saints &gt; St. Raphael Kalinowski ] at www.carmelite.com]

Kalinowski's remains were originally kept in the convent cemetery, but this proved unmanageable because of the large number of pilgrims who came visiting. So many of them took handfuls of dirt from the grave, that the nuns had to keep replacing the earth and plants at the cemetery. His body was later moved to a tomb, but the pilgrims went there instead, often scratching with their hands at the plaster, just to have some relic to keep with them. [ [http://www.elonka.com/family/saint/raphael.html Elonka's Family: Pics and Info about Saint Raphael Kalinowski ] ] His remains were then moved to a chapel in Czerna, where they are currently. [ [http://www.karmel.pl/kalinowski/miejsca/czerna.html Witryna Krakowskiej Prowincji Karmelitów Bosych ] at www.karmel.pl]

Father Raphael was beatified by Pope John Paul II in 1983 in , in front of a crowd of over two million people. On November 17, 1991, he was canonized when, in , Pope John Paul declared his boyhood hero a Saint. [ [http://www.vatican.va/news_services/liturgy/saints/ns_lit_doc_19911117_kalinowski_en.html The Vatican's 1991 press release about his canonization] ] Raphael was the first friar to have been canonized in the Order of the Discalced Carmelites, since co-founder Saint (1542-1591).

His feast day is November 19.