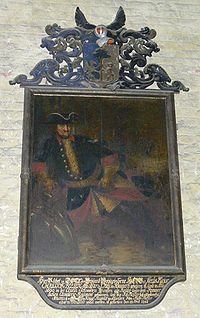 Christoph Beetz (May 1, 1670, Swedish Pomerania – April 18, 1746, Stralsund) was ennobled by Emperor Charles VI in Vienna, Austria on 27 January 1734 as "Beez von Beezen" (Beetz von Beetzen) after receiving an heritable membership of the old class of the Holy Roman Empire (higher nobility). His military career is highlighted by his command of a regiment at the age of 20 and his final appointment as Swedish Platz-Major and Stabs-Major of the military garrison in Stralsund. He was ranked as a Stadt-General. His 1746 portrait still graces the interior of Saint Mary's Church, Stralsund, Germany (German: Kirche St. Marien zu Stralsund) where he is buried.

Other examples of cognatic succession for both male and female descendants are the letters patent of nobility issued by Charles VII in December 1429 to Jeanne d'Arc and all her descendants, as well as the title Baron (or Count) Arundell of Wardour according to the letters patent issued by Rudolf II in Prague December 14, 1595 for Thomas Arundell and all his descendants, men as well as women. The more common pattern for hereditary nobility, when only men can forward nobility to their children, is called agnatic succession.

Christoph Beetz’ parents and grandparents were also famous and the Emperor’s close employees. Perhaps the family comes from a district called ‘Beetzendorf [5]’ south of Berlin and can be related to the Beetzendorf Castle [6]. But this is nevertheless very long ago, for instance at the 1300 century, due to a check about the ownership at Beetzendorf Castle. Some of his relatives held offices in the Swedish state. Christoph Beetz was one of the very famous from the Beetz family. He was married to Anna Sofia from Germany and had two sons, Johan Henrik von Beetzen (born in Stralsund about 1698) and Karl Joakim von Beetzen (born in Stralsund , November 1698). Karl Joakim was married to Anna Helena Giers (born 12 January 1707 in Gøteborg) from the famous Giers-family from Sweden that also has a famous Russian branch related to the named Russian Foreign Minister for about 13 years, Nikolai Giers Nicholas de Giers, and a known English branch.

The Beetzen-family is today mostly known from Sweden, but there are also for instance Norwegian and German descendants.