Are You Ready (Bucks Fizz album)

Are You Ready (Bucks Fizz album) 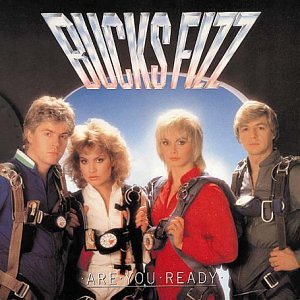 "Are You Ready" is an album by pop group Bucks Fizz.

By the end of , Bucks Fizz had proved that they were no one-off act by releasing three follow-up UK top 20 singles and album. In November, the group released the first single from their forthcoming second album. "" became a big hit over 1981 and in the early weeks of the made number one in the UK Charts [ [http://www.theofficialcharts.com/zoom.php?id=492 The Official UK Charts Company : ALL THE No.1's ] ] [ [http://www.yearsofgold.org.uk/1982WEEK3JAN16.htm REMEMBER WHEN - 16TH JANUARY 1982 ] ] . The record eventually outsold "" to become their biggest selling single in the UK.

Buoyed by this success, the group concentrated on recording the second album. A second single was released in March , entitled "". Well regarded in the press for its production values and intricate vocals, the song also made number one in the UK Charts [ [http://www.theofficialcharts.com/all_singles_song.php?id=498 The Official UK Charts Company : ALL THE No.1 SINGLES ] ] [ [http://www.yearsofgold.org.uk/1982WEEK16APRIL17.htm REMEMBER WHEN - 17TH APRIL 1982 ] ] .

This became the peak of the group's career, bolstered by an award for best group at the Rock and Pop Awards and a nomination at the .

For the cover of the album, the group employed a parachuting theme. The cover depicts them in parachuting gear in an aeroplane, the gatefold sleeve opens out to show them flying through the air, while the back reveals a silhouette of them having landed. "Are You Ready" was released in May and swiftly rose to the top ten [ [http://www.chartstats.com/albuminfo.php?id=6021 Chart Stats - Bucks Fizz - "Are You Ready"? ] ] . It remains Bucks Fizz's most successful album and was met by positive reviews. [ [http://www.ianbairnson.com/discography/bucksfizzareyouready/bucksfizzareyouready.htm Guitarist Ian Bairnson site with song clips] ]

Like the previous album, "Are You Ready" was produced by , who complimented the group on their ability to effortlessly adapt to the intricate harmonies and overlaying vocals on many of the tracks.

A third single, "" was released from the album a month later. Seen as something of a departure for the group, it was a largely acapella ballad and also became successful in the UK Charts when it duly made the top 10.

No further singles were issued from the album after this, although some European countries released album tracks "Easy Love" and "Are You Ready" as singles - the latter also being released in Australia. In Japan the track "Another Night" was issued following its receiving an award in the , held in Tokyo. [ [http://translate.google.com/translate?hl=en&sl=ja&u=http://www.yamaha-mf.or.jp/history/e-history/wpsf/index.html&sa=X&oi=translate&resnum=1&ct=result&prev=/search%3Fq%3Dhttp://www.yamaha-mf.or.jp/history/e-history/wpsf/%26hl%3Den Yamaha Music Festival 1981 details] ] The group also recorded many of the songs from this album in Spanish for the Latin American market and released an album, "El Mundo de Ilusion" later in the year. [ [http://www.raffem.com/BucksFizzRecords.htm#82 Rafaels and Stefans pictures ] ]

"Are You Ready" remained on the British Charts for much of the year and was listed as #61 on the year end chart in 1982. The singles "The Land Of Make Believe" and "My Camera Never Lies" were also both placed in the year-end top 50.

The album was re-issued twice. The first time in , and again in , both times with bonus tracks [ [http://de.click2music.co.uk//3rd/Prezence/bucksfizz/flash.html Album re-issue Press release] ] .

In , a demo of track "Breaking and Entering" and alternate versions of "My Camera Never Lies" and "Easy Love" were released on "" compilation. Two years later saw a follow-up, which featured an alternate recording of "Another Night" and remixes of "Easy Love" and "The Land Of Make Believe".

(Bonus tracks:)
#Now You're Gone
#What am I Gonna Do
#What's Love Got to Do with It
#When We Were Young (Extended Club Mix)
#Rules of the Game (Extended Mix)

Mike Nolan - lead vocals on "Now Those Days are Gone"

Although Bucks Fizz generally faced harsh criticism in the press for being a lightweight pop act, their albums usually met with favourable response. "Are You Ready" in particular received some of their best ever reviews.

gave the album a rare 10 out of 10 rating, stating that it was "(almost) the perfect pop album". [, May 15 1982] Album track "Twentieth Century Hero" was listed by another staff writer as the best song of the month.

also called the work "perfect pop" and noted the craftsmanship of the production.

Other reviews favoured the tracks "Another Night" and "Now those Days are Gone". The latter song was said to give Bucks Fizz "credibility".