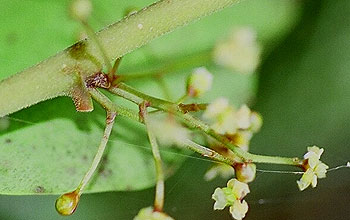 "Amborella trichopoda" is a sprawling shrub or small tree with two-ranked leaves without stipules. The leaves are alternately arranged, , simple, with serrated and rippled margins, and about 8&ndash;10 cm long. The plant is dioecious: each flower produces both s and s, but only one sex develops fully and is fertile in the flowers of an individual plant, the structures of the other sex remaining undeveloped. The small s, 4&ndash;8 mm across, are in terminal cymose inflorescences or clusters, each flower with a perianth of undifferentiated s arranged in a spiral, rather than in the whorls of more derived flowers. The is a red berry containing a single , 5&ndash;8 mm long.

Individuals of this species in the wild are being reduced by and .