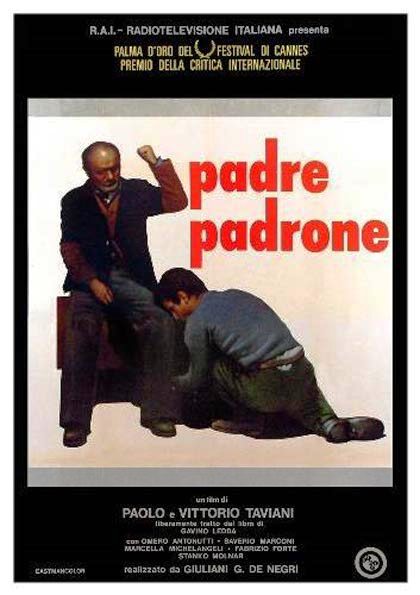 "Padre padrone" (English: "Father and Master") () is an directed by Paolo and . The Tavianis used both professional and non-professional actors from the Sardinian countryside. [imdb title|id=0076517|title=Padre padrone.]

The film depicts a n shepherd who is terrorized by his domineering father and tries to escape by educating himself. He eventually becomes a celebrated linguist. The drama is based on an autobiographical book of the same title by .

The film opens at a Sardinian elementary school that six-year old Gavino (Saverio Marconi) is attending. His tyrannical peasant father () barges in and announces to the teacher and the students that Gavino must leave school and tend the family sheep. Under his father's watchful eyes and the victim of his sadistic behavior, Gavino passes the next fourteen years tending sheep in the Sardinian mountains. There he begins to discover things for himself and begins to rebel against his father.

Gavino is rescued from his family and his isolation when he is called for military service. During his time with the army he learns about electronics, the Italian language and classical music, yearning the while for a university education.

When Gavino returns home, he declares to his father that he will attend university. His father is against this and tells him that he will throw him out of the family home. They have a nasty fight, but Gavino eventually attends university and emerges as a brilliant student. He becomes a linguist, specializing in the Sardinian dialect.

The film ends in documentary fashion as Gavino Ledda himself tells why he wrote his book and what Sardinian children may expect as inhabitants of a rural area with close ties to the land.

, film critic for "," praised the film and wrote, "Padre Padrone" is stirringly affirmative. It's also a bit simple: The patriarchal behavior of Gavino's father is so readily accepted as an unfathomable given constant that the film never offers much insight into the man or the culture that fostered him. Intriguingly aberrant behavior is chalked up to tradition, and thus robbed of some of its ferocity. But the film is vivid and very moving, coarse but seldom blunt, and filled with raw landscapes that underscore the naturalness and inevitability of the father-son rituals it depicts." [ [http://movies.nytimes.com/movie/review?_r=1&res=9D07EEDA1F3AEF33A25757C2A9649D946690D6CF&oref=slogin Maslin, Janet] . "The New York Times," film review, "Man's Inhumanity to Son," , . Last accessed: , .]

The staff for "Variety" magazine also lauded the film and wrote, "Around the initiation of a seven-year-old boy into the lonely life of sheep herder until his triumphant rift at the age of 20 with a remarkably overbearing father-patriarch (Omero Antonutti), the Taviani brothers have for the most part succeeded in adapting a miniature epic...In a long final part, accenting the boy's iron will to learn right up to a high school diploma, the final showdown between patriarch and rebel son is perhaps a more consequent narrative." [ [http://www.variety.com/review/VE1117793826.html?categoryid=31&cs=1&p=0 "Variety"] . Film review, December 24, 1977. Last accessed: December 31, 2007.]