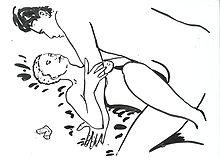 The male lies above the female, as in the missionary position, but moves upward along the woman's body, until his erection, which would otherwise point "up," is pointing down, the dorsal side of the penis now pressing against the clitoris; and as opposed to the missionary position, the male’s body moves downward (relative to the female's) during the inward stroke, and upward for the outward stroke. She may also wrap her legs around his. Sexual movement is focused in the pelvises, without leverage from the arms or legs. The rocking upward stroke (female leads) and downward stroke (male leads) of sexual movement builds arousal that partners let develop and peak naturally.

History and geography of studies

The technique for coital alignment was formulated by American psychotherapist Edward Eichel and the original study was published by Eichel, De Simone Eichel, and Kule in 1988 in the Journal of Sex & Marital Therapy. Since then, the topic has been studied several times in the same journal. A report in 1992 by Kaplan and her sex therapist trainees described the team's cursory trial of the C.A.T., acknowledging that they may have resorted to old routines after only a few attempts out of fear of disappointing their partners. Their call for other sex therapists to give the technique more rigorous testing instigated a series of controlled studies by Hurlbert and colleagues reporting statistically significant results in the treatment of female hypoactive sexual desire sex therapy.