The Tammar Wallaby (Macropus eugenii), also known as the Dama Wallaby or Darma Wallaby, is a small member of the kangaroo family and is the model species for research on kangaroos and marsupials. It is found on offshore islands on the South Australian and Western Australian coast. It persists in large numbers on Kangaroo Island, where it seasonally breeds in large numbers and can become a problem to farmers through competition for pasture and grain crops. High densities of these animals also have impact on the density of low vegetation across the Island. The Tammar Wallaby was seen on West Wallabi Island in the Houtman Abrolhos off Western Australia by survivors of the 1628 Batavia shipwreck, and recorded by Francisco Pelsart in his 1629 Ongeluckige Voyagie. This represents the first recorded sighting of a macropod by Europeans,[3] and probably also the first sighting of an Australian mammal.[4]

The tammar wallaby was first described by French naturalist Anselme Gaëtan Desmarest in 1817. It specific name comes from Eugene Hamelin, Commander of the ship Naturaliste.[5]:333 Its common name is derived from the thickets of the local shrub Allocasuarina campestris that it sheltered in in Western Australia.[6] It is classified along with the kangaroos and larger wallabies in the genus Macropus. Within this, it is placed in the subgenus Notomacropus along with several species of wallaby, all members of which have a facial stripe.[7] 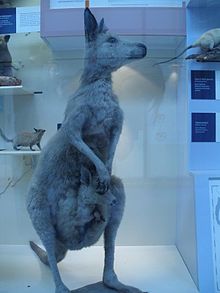 Taxidermy of tammar wallaby and joey

The tammar wallabies on Flinders Island were described as having a greyer coat and thinner head than the tammars on Kangaroo Island[8] and were given a separate name, while East and West Wallabi Islands are smaller than the Kangaroo Island tammars. Other early naturalists suspected that all island populations composed one species.[9] A more recent study has compared tammar wallaby skulls in museums around the world with skulls from extant populations on the Abrolhos Islands, Garden Island, Middle Island and Kangaroo Island as well as those from New Zealand and found that there were three distinct groups; one group made of populations from mainland Western Australia, East and West Wallabi Islands, Garden Island and Middle Island, a second ground composed of population form Flinders Island and mainland Southern Australia in the 19th century as well as populations from New Zealand and a third group composed of the Kangaroo Island population.[10] 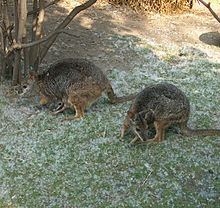 As such, three subspecies of tammar wallaby are currently recognised:[11]

Fossil evidence exists from the late Pleistocene, with remains found in the Naracoorte Caves.[7] Island tammar wallabies have been isolated from those on the mainland for 15,000-7,000 years, since the end of the last Ice Age and each population shows genetic differences from each other.[5]:332 It is likely that tammars originated in South Australia and spread to Western Australia and evolved tolerance of sodium fluoroacetate. The lethal dose for mainland Western tammars is greater than 5 mg/kg, while the lethal dose for tammars on East and West Wallabi Islands and Garden Island is less than 2 mg/kg.[12] Plant species that have sodium fluoroacetate do not occur on the islands and thus tammars must have retained their tolerance since their islolation 11,500–7000 years ago.[5]:334 By contrast tammars from the eastern part of their range are highly susceptible to the poison with the lethal dose for tammars on Kangaroo Island being less than 0.2 mg/kg.[12] There are also differences in serum proteins, iron-building transferrin protein and red cell antigens, between the Garden Island and Kangaroo Island populations, which are at two ends of the species’ continuum.[5]:333

The tammar wallaby is the smallest wallaby species. It has a small head and large ears; the tail is long and thick at the base.[13] It is dark, grizzled grey-brown above, becomes rufous on the sides of the body and the limbs, especially in males are pale grey-buff below.[11] The tammar wallaby exhibits significant sexual dimorphism, with the maximum recorded weight in males being 9.1 kg and maximum recorded weight in females is 6.9 kg. The body length is 59 to 68 cm in males and 52 to 63 cm in females. Both males and females are about 45 cm in height. The tails of males range from 38 to 45 cm and that of females from 33 to 44 cm.[13]

Conservation and introduction to New Zealand 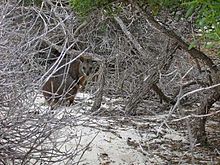 Tammar wallaby on North Island in the Houtman Abrolhos. Although native to the mainland and nearby islands, the Tammar Wallaby has only recently been introduced to North Island, and in the absence of any predators, has increased in population to the point where the islands's vegetation is being heavily overgrazed.

Since European occupation, tammar wallaby populations on both mainland Australia and some islands have been greatly reduced or even eradicated. The mainland population of tammars have been descripted as "very plentiful in many parts of the south-west, but rapidly disappearing in the cultivated districts, especially towards the northern end of its range."[14] The region was cleared for wheat and sheep which caused the decline to continue and tammars are only restricted to a few isolated pockets where foxes are controlled.[5]:332 In the 19th century, tammars were so common on the Eyre Peninsula and around Adelaide that battues were organised to protect crops and pastures by destroy large numbers of the animals. This has caused drastic declines resulting in the tammar becoming extinct in Adelaide by the 1920s and in the Eyre Peninsula probably by the 1970s.[5]:332-33 However the genotype of Eyre tammars survives as they were introduced to New Zealand on Kawau Island and Rotorua. Farming activities led to the extinction of the tammar on Flinders Island and St. Peter’s Island. According to one source, only on Kangaroo Island are tammars abundant and secure.[5]:333 However, the tammar wallbay is listed as Least Concern by the IUCN, due to "its wide distribution, presumed large population, occurrence in a number of protected areas, and because it is unlikely to be declining at nearly the rate required to qualify for listing in a threatened category."[2] 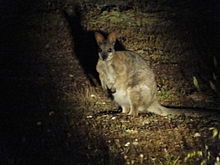 The tammar is mostly nocturnal.

On Kangaroo Island, tammar wallabies shelter under divaricating bushes which cover most of the island. Tammars are nocturnal, being most active after dusk and before dawn. During this time, they forage for acacia seeds in the shrubs and feed on grassy clearing or farmland pasture.[5]:335 Tammars live in well-defined home ranges of 42 ha in summer and 16 ha in winter, and the ranges overlap with each other.[15] Tammars occupy a daytime area of scrub for shelter from the sun and then move to another area of grassland at night. In summer, grass dries off and the tammars move over greater distances than in winter to higher quality food.[15] Plant species in their diet include Gastrolobium bilobum, Austrodanthonia setacea, and Corymbia calophylla.[11] 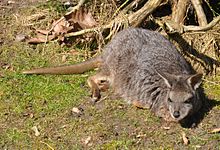 Tammars maintain their body temperature against high ambient temperatures by licking their forearms and panting. When the ambient temperature is above 30°C, the respiratory system of the tammar increases steeply and evaporate water loss also increases. When the ambient temperature is above 40°C, it can no longer control its body temperature and will die unless it can get away from the heat.[16] Tammars pass less water in urine and reabsorb water from the distal colon which causes them to have only about 40% water content in their feces. This allows them to avoid dehydration.[5]:335 Tammars live on several islands that have no fresh water and must subsist on seawater or the moisture in plants.[5]:335 Tammars have been observed going to the nearest beach and drink seawater. They can live on seawater because their renal concentrating capacity is far greater than those of other small macropods.[17]

Mother wallaby with young in pouch

The tammar wallaby has a promiscuous mating system with females mating with multiple males.[18] Breeding is strictly seasonal and mating is highly synchronised with a large proportion of births occurring in late January and early February.[19] Females have a post-partum estrous cycle within hours of giving birth and all mating activity concludes within four hours of parturition when the wallabies are undisturbed.[18] The testis size of male tammars have little seasonal variation.[20] Concentrations of sperm and testosterone peak at the onset of the breeding season but are low the rest of the year.[20] Around two weeks before the females give birth, the males will begin sniffing the uro-gential openings and pouches of the females to evaluate their reproductive status.[21]:78 Females allow males to mate with them soon during post-partum, although the first ejaculations are delayed due to intense inter-male aggression directed towards any male which attempts to mate with an estrous female.[18] Mate-guarding is an important contributor to male reproductive success.[21]:83 During the estrous period a clear dominance hierarchy is established. The more dominant males spend more time guarding, checking and disrupting the consortships of the estrous females.[21]:83 Mating chases, in which a post-partum female is pursued by several males, have been observed.[18] The female tammar conceives a few hours after giving birth and suckles her young in her pouch for the next seven months. During the first five months of her lacation, the dormant embryo in her uterus will only develop if the young in her pouch is lost or removed.[5]:338 However, after the winter solstice in June the embryo will not develop if the pouch young is removed, nor does it develop when the older young leaves the pouch in October but instead continues to remain dormant in the uterus until after the summer solstice in December.[5]:338

In late 1998, between 120 and 230 tammar wallabies died suddenly in research facilities and zoos in New South Wales and Queensland, perishing less than twelve hours after exhibiting the first symptoms. and most exhibiting no symptoms at all. Post mortem examination revealed haemorrhage of muscle, and abdominal and thoracic organs. The syndrome is known as Tammar Sudden Death Syndrome (TSDS) and the pathogen is an orbivirus of the family Reoviridae. It does not occur south of Sydney, and captive populations of tammar wallabies in New South Wales have suffered subsequent infections in summer months.[22] 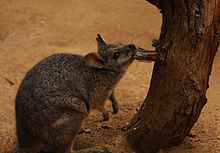 Tammars are easy to keep in captivity

The tammar wallaby was the second marsupial to have its genome sequenced. It was the first Australian marsupial to be sequenced (although it was the second published).[23] The genome of a marsupial is of great interest to scientists studying comparative genomics, because marsupials are at an ideal degree of evolutionary divergence from humans: mice are too close and have not developed many different functions, while birds are genetically too remote.[24] The tammar wallaby is one of the model organisms as it is cheap to maintain and relatively tractable to scientific study.[25] The tammar genome is about 3.6 Gb, with a relatively short genetic map length of 1172 cM.[24] Researchers managed to isolate tammar bacterial artificial chromosomes (BACs) containing key immune genes from the tammar BAC library.[26] Using fluorescence in situ hybridisation (FISH), BACs containing T cell receptor (TCR) and immunoglobulin (Ig) genes were physically mapped in tammar wallaby chromosomes.[26] This research has highlighted the conservation of genomic context of these important immune genes in marsupials.[26] Human and tammar genome comparisons have lend to the discovery of new human genes, such as RBMX and several related genes.[23]

Australian scientists, led by Dr. Ben Cocks, have found a compound in the milk of the tammar wallaby called AGG01 which has the potential to be a new and powerful form of antibiotic. AGG01 is a protein and in laboratory testing AGG01 has been shown to be 100 times more effective than penicillin, killing over 99% of the pathogenic bacteria (both gram-positive and gram–negative) and fungus that it was incubated with, including Salmonella, Proteus vulgaris and golden staphylococcus.[27]