Singapore maintains diplomatic relations with 175 countries[1] although it does not maintain a high commission or embassy in many of those countries. It is a member of the United Nations, the Commonwealth, ASEAN and the Non-Aligned Movement.

Due to obvious geographical reasons, relations with Malaysia and Indonesia are most important. Historical baggage, including the traumatic separation from Malaysia, and Konfrontasi with Indonesia, have caused a siege mentality of sorts.[citation needed] Singapore enjoys good relations with the United Kingdom which shares ties in the Five Power Defence Arrangements (FPDA) along with Malaysia, Australia and New Zealand. Good relations are also maintained with the United States; the US is perceived as a stabilizing force in the region to counterbalance the regional powers.

As part of its role in the United Nations, Singapore held a rotational seat on the UN Security Council from 2001-2002. It participated in UN peacekeeping/observer missions in Kuwait, Angola, Namibia, Cambodia, and East Timor.

Singapore’s leaders are realists; they perceive a Hobbesian world where might makes right.[2] The resultant siege mentality is due to Singapore’s geographical weaknesses, mistrust of Malaysia and Indonesia due to historical baggage, and from how she stands out as a "little red dot in a sea of green", as then-President Habibie of Indonesia put it.[3]

Singapore's first foreign minister was S. Rajaratnam, and her foreign policy still bears his imprimatur. Rajaratnam originally framed Singapore’s foreign policy, taking into account "the jungle of international politics", and was wary of foreign policy "on the basis of permanent enemies."[2] In 1966, S. Rajaratnam saw Singapore’s challenge as ensuring her sustained survival, peace, and prosperity in a region suffering from mutual jealousies, internal violence, economic disintegration and great power conflicts.[2]

In accordance with this worldview, Singapore’s foreign policy is aimed at maintaining friendly relations with all countries, especially Malaysia, Indonesia, and ASEAN, and ensuring that her actions do not exacerbate her neighbors’ insecurities.[2] In 1972, Rajaratnam envisioned the world being Singapore’s hinterland – integration into the world economy would ameliorate Singapore’s inherent lack of natural resources.

Thus, Rajaratnam believed that maintaining a balance of power, rather than becoming a de-facto vassal of some larger power, would provide Singapore with freedom to pursue an independent foreign policy. The interest in the Great Powers in Singapore would also deter the interference of regional powers.[2]

Brunei and Singapore have a currency agreement that the currencies of both countries can be used in either of the two countries. The Brunei dollar and the Singapore dollar are maintained at parity.

In August 2005, Brunei's Foreign Affairs and Trade Minister, Prince Mohamed Bolkiah arrived in Singapore for a three-day visit during which the two countries signed an agreement to eliminate double taxation, paving the way for further bilateral trade and investment.[4]

The Royal Brunei Navy and the Republic of Singapore Navy conduct an annual Exercise Pelican signifying strong ties between the two navies.

North Korea and Singapore have been trading partners since 2008. [5]

On 19 September 2005, Vice Premier Wu Yi of the People's Republic of China arrived in Singapore for a three-day visit. She led a delegation of ministers and senior officials at the 2nd Joint Council for Bilateral Cooperation between the PRC and Singapore.[6][7]

On 14 November 2010, Vice President Xi Jinping visited Singapore on a three day visit which affirmed Singapore's strong ties with China. His visit also commemorated with the 20th year anniversary of diplomatic relations between the two countries.[8]

Other examples of close ties between Singapore and China include Singapore helping China to build up its industries such as the Suzhou Industrial Park. Singaporeans have also donated generously in the aftermath of the 2008 Sichuan earthquake.

When Singapore established diplomatic relations with the People's Republic of China in 1990, Singapore wanted to maintain its good relationship with Taiwan and it strongly bargained with China to maintain the close links. Eventually, China did not force Singapore to denounce the Republic of China and it allowed low-level visits between the two. Moreover, Taiwan's trade mission in Singapore was renamed from "Trade Mission of the Republic of China" to "Taipei Representative Office in Singapore." This did not mean, however, that Singapore switched its recognition from Taiwan to China because it had not maintained diplomatic relations with either government. [10] Moreover, Singaporean troops continue to train in Taiwan, an arrangement which has been in place since the 1970s. This is, however, a diplomatically delicate situation which has flared up occasionally.

A severe diplomatic row broke out between the PRC and Singapore when Lee Hsien Loong visited Taiwan a month before being sworn-in as the Prime Minister of Singapore on 12 August 2004.[11] Factions in the Taiwanese media took the opportunity to highlight and publicize his visit, although the Singapore government emphasized that it was a private visit by Lee to familiarize himself with the latest developments there.

When Singapore started building its military in the 1970s, the Republic of China on Taiwan was one of the few places to offer assistance by providing training areas to the Singapore Armed Forces (SAF) for conducting military exercises. This assistance is valuable as Singapore is a land-scarce country consisting mainly of built-up areas. This arrangement continues today and is an important aspect of the relationship between Singapore and the ROC, although the two places do not conduct joint military exercise nor is there any official military alliance. SAF troops do not train together with Taiwanese soldiers and pays for the logistics and supplies consumed by the training troops.

On 22 March 2005, however, the Singaporean defence ministry had to quickly correct an erroneous report in the Liberty Times on a joint military exercise between Singapore and Taiwan,[12] This report caused the PRC government to demand an explanation. Singapore denied the report, while the ROC government refused to comment.

The PRC has continuously advocated the possibility of moving some or all of these military facilities to Hainan, although this may not be taken up due to sensitivities in diplomatic relations between Singapore and her largely Islamic neighbours.[13][14]

In August 2005, Singapore and Indonesia signed a Memorandum of Understanding to expand aviation rights between the two countries.[15]

On 3 October 2005, Prime Minister Lee Hsien Loong met Indonesian President Susilo Bambang Yudhoyono in Bali, just two days after the Bali bombings. They agreed to strengthen the fight against terrorism and also discussed cooperation in the fields of economy, trade and investment.[citation needed]

Relations with Indonesia are generally good, though current outstanding issues include the bans on the export of sand, and granite;[16] both of which, Singapore's construction industry is reliant on.

Singapore was formerly part of Malaysia but was separated in 1965 due to political differences and racial tension. There remains a high degree of economic and social inter-dependence between the two countries. For example, Singapore imports the vast majority of fresh meat and vegetables from Malaysia, and Malaysia supplies a large fraction of Singapore's fresh water according to two treaties. Many Malaysians work in Singapore, some living in Singapore as permanent residents, while many also commute from Johor Bahru daily. Bilateral relations are complex and have experienced many highs and lows over the last 40 years.

Singapore and Malaysia are both members of the Five Power Defence Arrangements. The two countries also routinely conduct joint military exercises to enhance bilateral ties and to heighten the professional interaction between the Singapore Armed Forces and Royal Malaysian Army. In August 2005, the two countries concluded the 12th exercise of the series, Ex Semangat Bersatu 05 in Pahang.[17]

Singapore has several long-standing disputes with Malaysia over a number of issues:

Relations between the two countries has improved in recent years, especially since the transition of leadership in both governments. These relations improved by leaps and bounds when Abdullah Ahmad Badawi took over the post as Prime Minister. Mahathir bin Mohamad, the ex-Prime Minister, still raises claims regarding Singapore's intentions in a number of matters, such as land reclamation. In 26 April 2005, the two countries signed a settlement agreement concerning Singapore's land reclamation in and around the Straits of Johor.

Both countries exchanged many high-level visits in 2004 and 2005, including the visit to Singapore in 12 January 2004 by Malaysian Prime Minister Abdullah Ahmad Badawi who had just taken over from Mahathir bin Mohamad in October 2003. 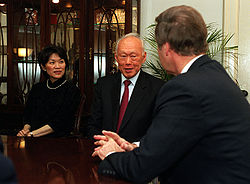 Singapore and the United States share a long-standing and strong relationship, particularly in defence, the economy, health and education. The government of Singapore believes that regional security, and by extension, Singapore's security will be affected if the United States loses its resolve in Iraq.[30]

Singapore and the US are defence partners; Singapore buys a large number of weapon systems from the US, and has close ties such as the F-16 detachment stationed at Luke Air Force Base. In return, the United States Navy is allowed to use Singaporean naval facilities, including the newly constructed Changi Naval Base designed with USN aircraft carriers in mind.[31][32] Under a Memorandum of Understanding signed in 1990, the United States military is permitted to use Paya Lebar Airbase and Sembawang wharves; a US naval logistic unit was established in Singapore in 1992.[31]

The Regional Emerging Diseases Intervention Centre (REDI), opened on 24 May 2004, is a joint US-Singapore collaboration to promote cooperation in tackling emerging infectious diseases. The centre facilitates the exchange of information and expertise on surveillance; prevention and control of, and research on, communicable and non-communicable diseases; and on bioterrorism concerns.

In 2003, Singapore and the United States signed the United States-Singapore Free Trade Agreement (USSFTA), which came into force in January 2004. This is the first free trade agreement into which U.S. entered with an East Asian country.

In 1994, relations with U.S. were hampered for a brief period by the caning incident of American teenager Michael P. Fay who was convicted in Singapore for vandalism.

In September 2005, Singapore responded to the relief effort in the wake of Hurricane Katrina in U.S.. Four Singaporean CH-47 Chinook helicopters and 45 RSAF personnel from a training detachment based in Grand Prairie, Texas were sent to help in relief operations. They are operating out of Fort Polk in cooperation with the Texas Army National Guard.[33][34]

During 15–17 August 2005, Singapore hosted a multi-national maritime interdiction exercise, codename Exercise Deep Sabre as part of the Proliferation Security Initiative to address the proliferation of weapons of mass destruction. Launched at Changi Naval Base and conducted in the South China Sea, the exercise involves some 2,000 personnel from 13 countries.[45]

On 6 May 2004, then Prime Minister Goh Chok Tong delivered a speech at the Council on Foreign Relations in Washington, D.C. titled "Beyond Madrid: Winning Against Terrorism", expressing Singapore's view on the global challenge against terrorism.[46]

In August 2005, Malaysia, Indonesia and Singapore agreed to conduct joint anti-piracy patrols in the Malacca Strait to increase security in one of the world's busiest sealanes.[citation needed] Thailand later also joined in this effort.