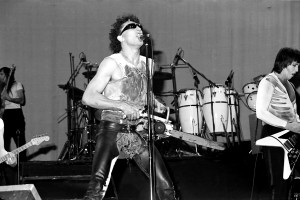 The Tubes are a San Francisco-based rock band, which was popular in the late 1970s and early 1980s, and was known for its live performances that combined lewd quasi- and wild s of media, and .

History of the band

Showbiz excess was a common theme of the band's early work, with Waybill sometimes assuming the on-stage persona of Quay Lewd (a pun on ), a drunk, drugged-out, barely coherent lead singer, decked out with flashing glasses and impossibly tall platform shoes. "White Punks on Dope", from their debut album, was an absurd anthem of wretched excess, and a tribute to their rich, white in San Francisco. The tune was covered (with different, non-translated German lyrics) by as "TV Glotzer" ("Couch Potato"), the opening track of her band's first album. The tune has also been covered by Motley Crue.

The Tubes first album was produced by . The second album, for , was produced by and called "Young and Rich". It features the hit "Don't Touch Me There" (arranged by ), and features Laramy Smith who with arranged and performeed the backing vocals. The Tubes third album gave way to thematic experimentation with "Now" and after the classic live record "What Do You Want from Live", (recorded during their record breaking run at the , London, England) their fourth for A&M "Remote Control" was a produced by about a television-addicted idiot savant. The cover of "Remote Control" is also a classic, showing a baby watching "" in a specially made "Vidi-Trainer".

One critic noted that with their media savvy and theatrical skills, The Tubes were born to create rock video, but arrived several years too early. ["MTV Who's Who in Rock Video", Maxim Jakubowski and John Tobler] Instead, they put their creativity and art skills into their live performances, in which songs could be full-fledged production numbers, from a beach movie for "Sushi Girl", to leather-clad S&M hijinks in "Mondo Bondage", to the antics of "What Do You Want From Life?" At their peak, their act featured dozens of other performers, including s and acrobats. The Tubes stage productions were choreographed by and featured cast members , LeRoy Jones, Michael Holman, Michael Springer, Edwin Heaven, Cindi Osborn, Heline Gouax and Mary Niland from 1975-1977. From 1978-1979, the cast included Sharon Collins, Caty Bevan and Loryanna Catalano. The Completion Backward Tour featured Shelly Pang, Cheryl Hangland, and . From 1983-1985, Michelle Gray (who later married Todd Rundgren) and Cheryl Hangland were principal dancers. Several crew members—including Lee Collins, Steve "Chopper" Borges, and Gail Lowe—made frequent appearances on stage in various roles as well.

The Tubes live shows in the late 1970s and early 1980s were rife with allusions to mainstream film ("", "Rollerball", "", "Grease"), then-forgotten B-movies ("", ""), music (Tom Jones, , a medley of television themes), contemporary pop culture (, the Viking program), television ("", "", the anime ""), and literature ('s "A Walk on the Wild Side"), presaging the subcultural reverence and over-the-top theatricality of later groups like .

These shows were expensive to produce, however, and while they earned the band a reputation for being one of the most entertaining live acts of all time, by the early 1980s they found themselves short of money. Their proposed fifth album, the self-produced "Suffer for Sound", was rejected by , who dumped the band instead, finishing out its contract with the oddities collection "T.R.A.S.H. (Tubes Rarities and Smash Hits)". [ [http://www.sfherald.com/columnists/gold/gold-03-01.html Kimberlye Gold interview with Fee Waybill, "He'll Talk to Ya Now!"] , accessed ]

The band then signed to , scaling back the live shows and repositioning itself as a strait-laced rock band, teaming with producer . "", another concept album, featuring the staple "Talk to Ya Later", positioned itself as a motivational business document, complete with shocking pictures of the band members cleaned up and wearing suits. Also in 1981 they had a song featured in a movie starring Chevy Chase in "" called "Gonna Get It Next Time" not featured on any of their albums. "" followed a few years later, and produced a few hits, including the number 10 (USA) hit "She's a Beauty". The band also had their first Top-40 hit in the in 1981 with a serious ballad, "Don't Want to Wait Anymore" (recorded almost entirely by Spooner, without Waybill's participation).

The band teamed up with Rundgren once again for 1985's "", a flop that led Capitol to drop the band just as it was going on tour in support of the album—a tour that would leave the band a half million dollars in debt, forcing them to play low-budget gigs for a year to pay off their debts. [Kimberlye Gold interview, "op cit"] Waybill released an unsuccessful solo album ("Read My Lips", on Capitol Records) earlier in the year, and soon left the band ("Fee broke up", one band member said). An abortive attempt with a new lead singer led to a few appearances before the band split up. During this time, Waybill also enjoyed a fruitful writing partnership with Capitol Records label-mate, , the most popular and well known song possibly being "Edge of a Broken Heart" by the female band Vixen.

In 1988, The Tubes continued on with long-time friend from Phoenix, Arizona, David Killingsworth on lead vocals, and minus Welnick (who would later join the ), Cotten, and Spooner. With the addition of Gary Cambra on keyboards and guitar, Waybill would eventually return in 1993 for a European tour and launching of the compilation CD for Capitol and 1996's "". In 2001, the band released a live CD, "The Tubes World Tour 2001", and continued to tour.

Welnick, who long suffered from depression, committed suicide on , .

On , , the remaining members of the Tubes reunited in Phoenix for their induction into the Arizona Music & Entertainment Hall of Fame.

1972: Tubes appear in film "Resurrection of Eve" as Jesus Bongo and the Millionaires

1973: Opened for the at the Matrix, at Bimbos, and at in San Francisco

1975: Tubes play 2 weeks at David Allen's Boarding House in San Francisco, several sell-out dates at The Roxy in Los Angeles and The in New York. Dec, 31- Headline and sell out Bill Graham's [http://concerts.wolfgangsvault.com/dt/the-tubes-concert/2646-7903.html]

1976: Held residency at Bimbos in San Francisco for one month, Prairie Prince dubbed "The One, The Only" by columnist . Tubes hold "Talent Hunt" at the Boarding House hosted by ; is contestant but loses

1977: Held residency at The in San Francisco for one month, The Whisky a-Go-Go in Los Angeles for two shows a night for one month, and in London for a week

1978: Headlined the Festival with and . On April 3rd, The Tubes performed live with on "", in the "Musical Battle to Save Cher's Soul Medley." As the title would imply, the performance was a duel between the forces of good and evil to determine where would spend her eternal destiny. Dolly Parton was dressed in white and, with a team of brightly clad singers, portrayed an angelic host while The Tubes, dressed in black leather and performing "Mondo Bondage," battled to send Cher's soul into eternal damnation.

1980: Appear in the film "Xanadu" singing the rock portion of the cross-genre song "Dancin'" opposite a .

1981: Record nominated "The Tubes Video" at , one of the first long form s

1982: Appeared in a commercial for Activision's video game ""

1983: Opened several dates for on the "" tour and on this tour, among other highlights, they were the first artists to ever play the newly opened Tacoma Dome in Tacoma, Washington. At the end of the Bowie tour, they played a few shows featuring their classic no-holds-barred theatrics in Portland, Oregon, and other west-coast cities.